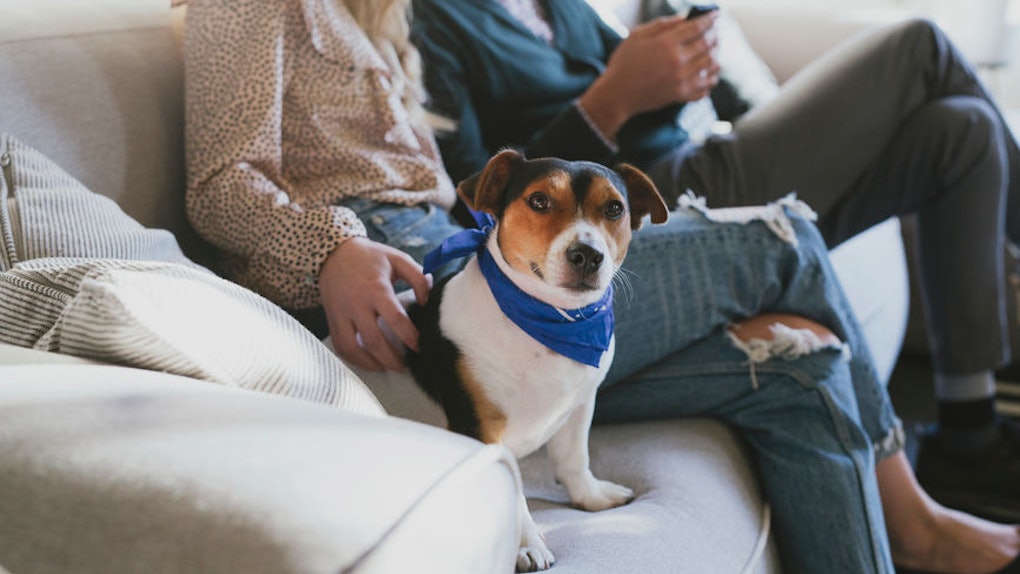 IMHO, it's a universal truth that each and every situation can be improved upon with some cuddles from your furry friend and a glass of wine in hand. Luckily, dog-lovers in Plano, Texas are on the same page about this fact, and K9 Cinemas' dog-friendly movie theater gives you just one more option to hang out with your fur baby outside of your home. The icing on the cake? The $15 ticket to the show includes bottomless wine or free whiskey, which will give you an extra incentive to ditch your couch and head to the movies for your pup hangout.

While the Lone Star State's K9 Cinemas officially opened back in December 2018, the company had a grand reopening in early May after adding some red couches to replace the previous padded chairs, as well as some delicious drink specials. Patrons can choose to imbibe bottomless wine (or four whiskeys) for free with the purchase of a movie ticket, which will only set you back $15. Considering the fact that some movie theaters will charge you that amount for one drink alone, you're getting one heck of an incredible deal while enjoying the added bonus of catching a flick with your four-legged friend. According to Yelp reviewers, there's also an assortment of free popcorn and other snacks for you and your doggo.

While watching a film with a glass of wine and your puppers by your side was previously reserved for at-home movie viewings, that all changed when Eric Lankford and his business partner, aka his Australian Eskimo Bear, decided to bring a dog-friendly movie space to the Lone Star State back in December.

While the theater originally opened with showings only on the weekends, it's since grown to include events all days of the week (including karaoke nights on Wednesday and trivia nights on Thursday) as it's amassed a loyal dog-loving community of people who just want to do more things with their pups and be around like-minded people.

"We’re going to have the movie on," Lankford said at the theater's opening last year, according to NBCDFW. "We want people [and their dogs] to be able to relax and watch the movie just like they would at home."

According to posts on the theater's Instagram page, there are matinee shows at 2 p.m. as well as movie nights at 8 p.m. on Fridays, Saturdays, and Mondays. Tuesday evenings, which are a church night streamed from The Porch at Watermark at 7 p.m., are free to attend with the promo code THEPORCH19. Meanwhile, you can head to K9 Cinemas on Wednesday nights at 8 p.m. for a karaoke night or Thursdays at 8 p.m. for a trivia night (in your PJs, if you so choose). You can purchase all tickets beforehand at k9cinemas.com/tickets if you want to have a better idea of the different events and showings that will be going on.

According to Lankford, there are just three rules that you'll want to follow to make sure that that everyone is having a safe and fun time while mingling with fellow pups and pup lovers.

"We've got some guidelines in place to make sure that it is safe, fun, friendly and clean when people show up," Lankford previously told NBCDFW. "We do have three doggone rules. Clean up after your pet. Bring the papers showing that your dog is up to date, and there are only two dogs per human allowed." According to reviewers, bringing an extra pup is only $5 more.

Unfortunately, you'll have to travel to Plano, Texas to take advantage of this one-of-a-kind experience for you and your furry best friend, but it sounds like it's definitely worth the trip if you happen to be in the area.

More like this
40 Captions For Spring Staycation With Your Dog & Any Pawsible Pics You Take
By Rachel Chapman
What Is Taco Bell's Times Square Digital Cantina? It's A Unique Experience
By Lara Walsh
This Video Tour Of Disney World Reveals Cool Design Secrets Of The Magic Kingdom
By Lara Walsh
Stay up to date