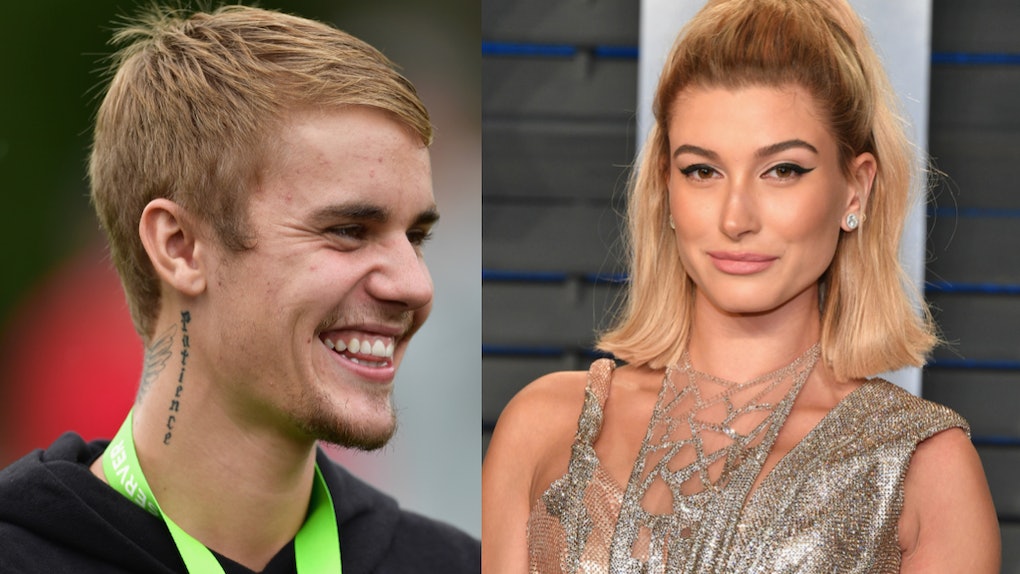 When I met my boyfriend two years ago, he told my best friend he was going to marry me one day. Now, we're still not engaged and, TBH, I don't see that happening any time soon but the point is that sometimes you just have a ~feeling~ about someone. And, apparently, even A-list celebs like Biebs aren't immune from these types of feels. What am I talking about? Well, you just have to read Justin Bieber's quote about marrying Hailey Baldwin from TWO YEARS AGO (yes, that's right, way before their recent engagement) to understand.

For those of you who aren't in the loop, let me give you a quick little refresher. This past Sunday, TMZ reported that America's favorite (OK, *one of* America's favorite) on again/off again couples, Bieber and Baldwin, are ENGAGED. For many of us fans, the news came totally out of left field.

I mean, as far as I was concerned, the two were just hookup buddies who got together whenever Jelena was taking a break. Well, it turns out I was sorely mistaken.

Bieber's been harboring some seriously romantic feelings for Baldwin for quite some time now. In a 2016 interview with GQ, Bieber got extremely candid about potentially marrying her one day. In addition to admitting that they spend a lot of time together and referring to her as "someone I really love," he got real about his future with her:

What if Hailey ends up being the girl I’m gonna marry, right? If I rush into anything, if I damage her, then it’s always gonna be damaged. It’s really hard to fix wounds like that. It’s so hard. I just don’t want to hurt her.

Yep, that's right, people. Even back in 2016, Bieber was considering spending the rest of his life with Baldwin. So, as out of the blue as this may seem to the rest of the world, his feelings for her have been very strong from the get-go.

But just because he saw himself marrying her back then, didn't mean he was in any rush to pop the question. No, instead, he made it abundantly clear that he was going to do no such thing until he was really sure that he was ready to treat her like she deserves to be treated:

I don’t want to put anyone in a position where they feel like I’m only theirs, only to be hurt in the end. Right now in my life, I don’t want to be held down by anything. I already have a lot that I have to commit to. A lot of responsibilities. I don’t want to feel like the girl I love is an added responsibility. I know that in the past I’ve hurt people and said things that I didn’t mean to make them happy in the moment. So now I’m just more so looking at the future, making sure I’m not damaging them.

Hopefully he still had this respectable outlook when he reportedly popped the question to her this past week.

After an on again/off again relationship dating all the way back to 2014, Baldwin and Bieber finally became "on again" this past month when they were first spotted out and about together in Miami. Apparently, this time around Bieber was ready to get way more serious because he finally popped the question shortly after.

More like this
Justin Bieber's Quote About His First Year Of Marriage To Hailey Baldwin Is Unexpected
By Corinne Sullivan
Zac Clark & Tayshia Adams Are Wedding Planning & I’m So Pumped
By Lydia Wang
When Are Ariana Grande & Dalton Gomez Getting Married? Here's The Reported Tea
By Corinne Sullivan
Stay up to date