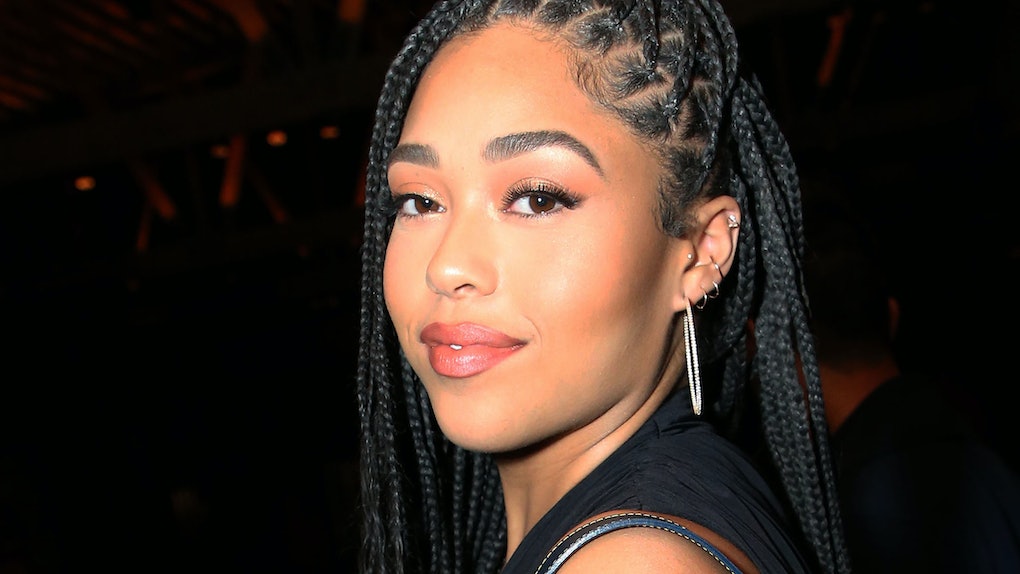 Jordyn Woods has left the building. I repeat, Jordyn Woods has left the building. And by building, I mean she's seemingly 86-ed Kar-Jennerland. Sure, we all heard the rumors that Woods had hightailed it out of her former bestie Kylie Jenner‘s compound awhile ago — you know, back when the massive fallout from the Tristan Thompson scandal was still shaking every single Keeping Up With the Kardashians fan to the very core. But now Woods has finally got a place to call her own, and it's even Instagram official. So does Jordyn Woods' Instagram about her new home mean her and Jenner are dunzo for good? All signs point to okurrr.

On May 19, Woods hit up her Insta feed to show off her new crib. Or maybe she just really, really liked the picture of herself perched on the edge of her sofa while decked out in a white robe and matching pair of kicks, which is totally what I wear on my feet when I'm chilling at home in a robe. Except not. Ever heard of slippers, sis?

Anyhoo, the pic also gives us a pretty good glimpse of a tiny corner of Woods' new space, which is decorated in neutrals and looks sort of cozy and modern with mountain views and a big wraparound balcony.

Not too shabby, right?

But apparently, tricking out the place hasn't been so easy.

"Finally my first piece of furniture arrived!" Woods captioned her post. "Designing homes is such a task but I’m having the best time doing it."

Pretty sure I know what Kris Jenner would have told her BTT (that's before Tristan Thompson, ya dig?):

Meanwhile, Woods' Insta followers seem to be totally down with this new development, and they wasted no time rolling up to the comment section of her post to share their supportive two cents.

"You got a house? Yes queen," wrote one.

"That's right!! Get your own identity! Break free!! Do you!!" added another.

"You had to leave the Jenner house so you could evolve," wrote a third.

And from a fourth: "Low key posting a picture of your new house for all the haters who said you needed Kylie’s money and were homeless. A WHOLE DAMN MOOD 👏👏."

The fact that Woods' is moving on shouldn't come as that much of a shock to anyone who's still following all the drama, since TMZ reported on May 19 that Woods finally picked all her stuff up from Jenner's house about a week and a half ago. The reason it took so long? Kylie was reportedly "super chill about the situation." But a source told TMZ that someone else in the fam noticed Woods' stuff lying around and thought it was "ridiculous and disrespectful ... like she was using Kylie's pad for storage." Hmmm. I wonder who that could be.

Elite Daily reached out to Woods and Jenner's teams for comment on the report about Woods picking up the rest of her stuff, but did not hear back.

Whether or not Woods moving into her own place means she and Jenner are over for good remains to be seen. But either way, I am really here for the way Woods is flying solo, and I'm truly happy to see her getting her life back together.

Best of luck in your new home, girl!