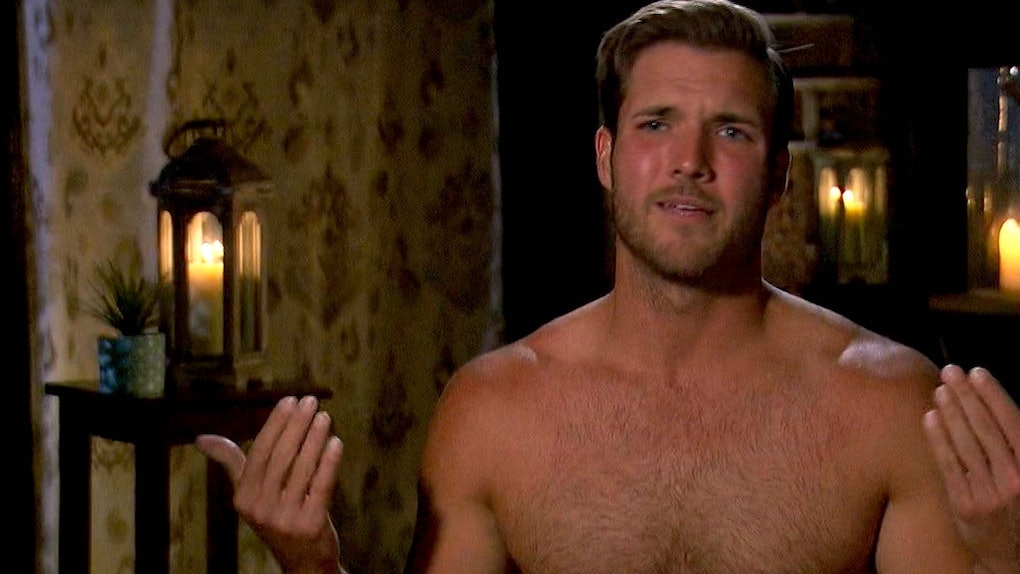 So far on this season of Bachelor in Paradise, Blake has been at the front and center in all the drama, but he's not the only one bringing the heat to the beach. Four new cast members arrived in Mexico for Week 2: Jordan, Christian, Mike, and Dean. And two of those guys arrived ready to duke it out, apparently. Jordan and Christian's fight on Bachelor in Paradise took everyone by surprise.

Jordan Kimball arrived in Paradise first, ready to "blow sh*t up," as Katie put it. As Bachelor Nation well knows, Jordan is no stranger to causing some massive drama in Paradise. He and Chris Harrison briefly went over the tension between Jordan and Jenna from last season of Bachelor in Paradise, including the time his threw a stuffed animal into the ocean. It's clear Jordan has the potential to lose his temper, and he showed that during his fight with Christian soon enough.

Christian Estrada arrived to the show with a less defined persona, since fans really only got to see him on one episode of Becca Kufrin's season of The Bachelorette. Although he got eliminated early on, he made a splash on the "Men Tell All" reunion special by having a heated confrontation with Jordan, arguing that he had a "real job" alongside his modeling career whereas Jordan was just a model. Clearly that rivalry has carried over into this season of Paradise.

Both Jordan and Christian immediately showed interest in Nicole when arriving at the beach, even though Nicole had already hit it off with Clay the previous week. Any time there's a love triangle (or really, a love square, in this case) on Paradise, it's never a good sign. In this case, it nearly led to Jordan throwing more stuff in the ocean.

Once he arrived on the beach, Jordan took Nicole on her second one-on-one date of the season. They went zip-lining and Jordan opened up to Nicole about his relationship with Jenna. But drama was clearly on the rise when Christian also asked Nicole out on a date, making Nicole the clear No. 1 choice for three different guys on the show... two of whom have a rough history with one another.

Clay was particularly hurt by Nicole accepting Christian's date invitation, as the two had one of the strongest connections of the show's somewhat-established couples up until Christian's arrival. When Christian picked Nicole, Clay sadly said, "When he grabbed her hand, it was like a knife to the heart." It did not help when Nicole and Christian clearly hit it off on their date, as the two went jet-skiing, spoke Spanish on the beach, and had a full-blown make-out session.

The tension finally erupted into an all-out fight during the cocktail party, as Clay got jealous over the connection Nicole seemed to have formed with Christian. In a talk after the date, Nicole told Clay she would like to see him be more assertive in getting her attention. During this convo, Christian walked over and asked Clay to leave him and Nicole alone so they could complete their date... and that's when all the drama began.

To try to keep things civil, Nicole stepped in to tell Christian she wanted to catch up with Clay, and he backed off, but everyone watching could tell something big was still about to happen. Although Nicole diffused the situation, she continued to make it clear to Clay she would like to see him be more aggressive, which clearly seemed to be the attributes that attracted her to Christian.

On the next night, Christian set up a piñata for Nicole on the beach, and Jordan immediately told Clay he should go punt it away, but Clay responded he just isn't like that. Jordan then encouraged Clay to at least step in on Christian and Nicole's conversation, and with Nicole's encouragement to be more assertive ringing in his head, Clay walked over to steal Nicole away. But the plan backfired when Nicole just looked uncomfortable.

Instead of making a scene, Clay walked away to vent to Jordan, who famously loves to make a scene. In the name of defending Clay, Jordan headed off to confront Christian and try to rip down the piñata, possibly to recreate his infamous stuffed animal ocean toss.

"Christian, I'm really sorry," Jordan said, not looking sorry at all. "Clay is a good friend of mine." But as Jordan reached for the piñata, Christian grabbed his arms to stop him, leading to a full-on physical altercation between the two. As the fight broke out between the two models, the screen went black and "to be continued" flashed across the screen. Way to leave the fans hanging, Paradise!

More like this
'Bachelor In Paradise' Season 7: Premiere Date, Cast, Filming, & More Info
By Rachel Varina
Peter Weber’s Quote About How ‘Bachelor’ Producers Get Contestants To Kiss Is Wild
By Abby Monteil
8 Facts About Lisa Delcampo On 'The Circle,' AKA Lance Bass' Assistant
By Rachel Varina
Stay up to date