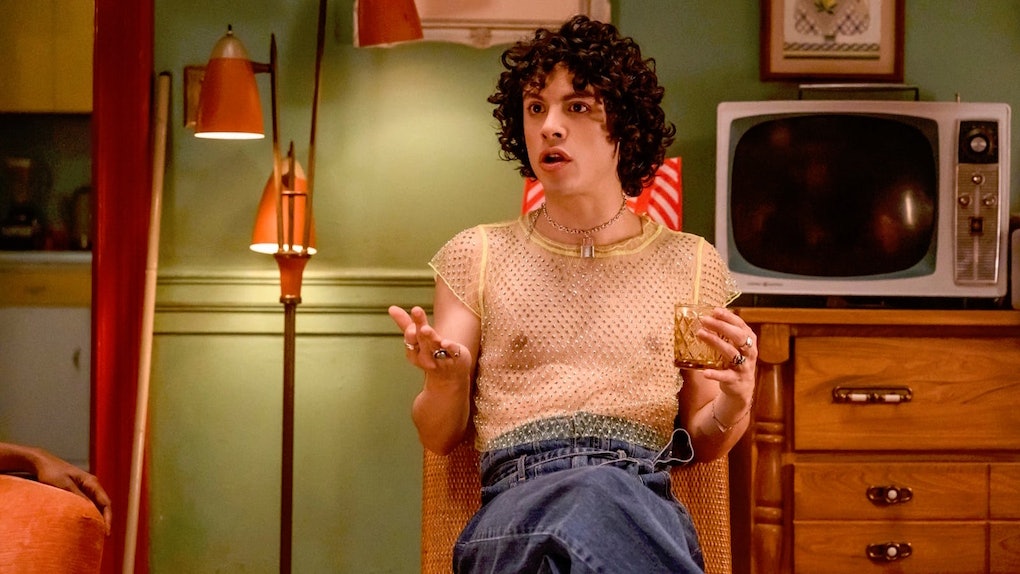 Katy Keene's May 14 episode was one of those season finales that makes fans hungry for a new season right away. The writers clearly have a lot planned for Katy, Josie, Jorge, and Pepper, but even the stars of the show aren't totally sure what could happen next. But it's not like they don't have ideas of their own; Jonny Beauchamp's Katy Keene Season 2 theories make it clear the cast is just as invested in the show's future as viewers are.

Spoiler alert: This post contains spoiler from Katy Keene's Season 1 finale, "Come Together." After a season full of twists and turns for Katy Keene's Fab Four as they struggled to follow their New York City dreams, each character got their own version of a bittersweet ending — some more bitter than sweet. Katy (Lucy Hale) managed to save Lacy's and even met her maybe-dad Leo Lacy, while Josie (Ashleigh Murray) had to send her boyfriend Alex Cabot (Lucien Laviscount) off to rehab and restart her music career with a newly honest Pepper (Julia Chan) as her manager.

But it was Beauchamp's Jorge who got the most ominous ending of all, as he came face-to-face with the developer who tried to buy his family's building: Hiram Lodge (Mark Consuelos). The reveal of the Riverdale baddie in the Katy Keene season finale was a big one, and it has fans (and actors) speculating what his appearance will mean for the future.

"I think next season is going to be all about saving the building and fighting Hiram Lodge," Beauchamp tells Elite Daily, guessing Hiram will definitely be a major part of Season 2.

Hiram potentially joining the second season of Katy Keene is a pretty big deal for a lot of reasons. For one, it raises the question of how often he may appear in Riverdale Season 5 if Consuelos is busy filming Katy Keene. But more interestingly, Hiram's presence threatens to totally change the tone of the show. After all, Hiram is at the core of the dark, murder-y elements of Riverdale, but Katy Keene has totally separated itself from those elements of its sister show by leaning more into brightness and optimism.

Beauchamp thinks Hiram's presence could change things, but not completely. "I think Katy Keene may take a turn actually and get a little darker, but we’ll always do it with that candy-apple red finish," he says.

Katy Keene already had a handful of Riverdale crossovers before Hiram's arrival. Sierra McCoy (Robin Givens) and Kevin Keller (Casey Cott) have already paid Josie a visit in New York, and Beauchamp is excited for more crossovers in Season 2. In particular, he really wants a certain HBIC to make her way to NYC: "I mean, I can’t help it: I love Cheryl Blossom. I stan Cheryl Blossom, and I’ve stanned her forever. I think she’s so gorgeous and I love her line readings."

Beauchamp would also love to see Jorge take a road trip to Riverdale and bring out his drag queen alter-ego Ginger to shake the town up ("very To Wong Foo-style").

But before Jorge can let down his hair, he has some unresolved dating drama to deal with. Jorge's relationships with both his firefighter boyfriend Bernardo and his longtime hookup Buzz exploded toward the end of Season 1 after they failed to make a throuple work. When Bernardo tried to win Jorge back, Jorge surprised fans by turning him down and opting to focus on himself. However, Beauchamp thinks both Buzz nor Bernardo have a chance to return in Season 2.

"The characters seem to have unfinished business, and also the fans were really shipping Bernardo and Jorge. But also we can’t ignore that some fans really like Buzz ... So I wonder if they’re both going to come back. I would not be surprised," he muses.

Jorge isn't the only one with some romantic troubles. Katy finally realized she wanted to be with KO at the end of the season, but when she rushed off to see him before his move to Philadelphia, she chose to let him go follow his boxing dreams.

"They’re both very career-driven. Katy’s really hitting the fast lane in New York and KO’s dream is really in Philly," Beauchamp says of Katy's decision. "So they parted for their dreams. But I really think KO’s coming back. It’s not the end."

Then there's Pepper and Josie, who ended the season with a new partnership. After parting ways with her boyfriend/manager Alex, Josie offered the manager job to Pepper, who was happy to take it. It seems like a good match, but considering Pepper's shady past, there could be some trouble down the road.

"You can take the girl from scamming, but you can’t take the scam out of the girl ... that’s a part of who she is," Beauchamp points out. "I think in the last episode we showed that we’re really here for Pepper and we love her no matter what, so I think she’s going to let us in, and I don't think she’s going to do that to us anymore."

If any of Beauchamp's theories become reality, Katy Keene is definitely in for some more drama, and Riverdale fans should be paying more attention than ever.