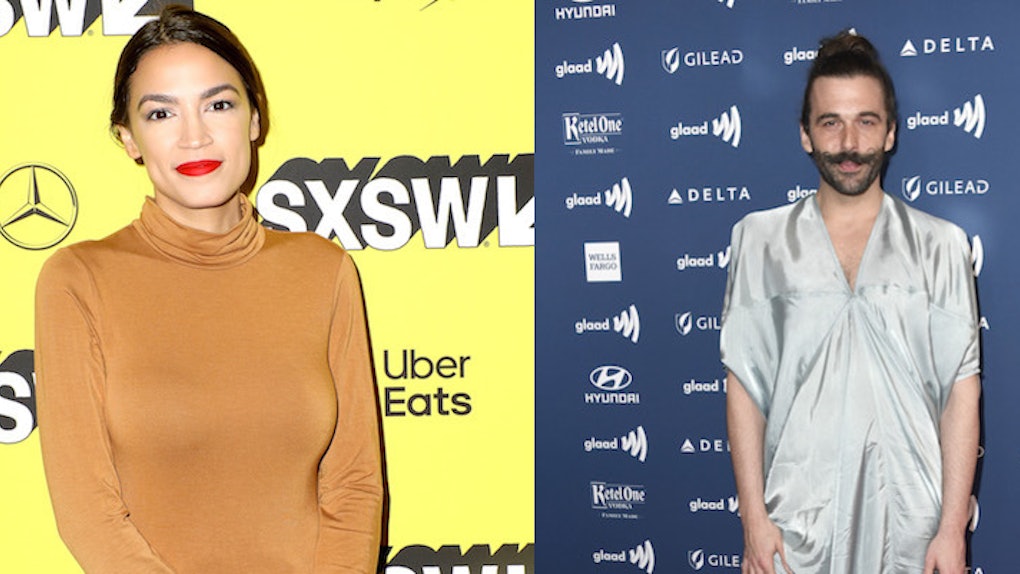 I don't know about you, but I've already blown through all of Queer Eye season 3 on Netflix (it only took a day), and I've been having some major withdrawal. But all that's forgotten (mostly) thanks to an Instagram post by one of my Queer Eye faves. Jonathan Van Ness' photo with Alexandria Ocasio-Cortez and Nancy Pelosi will have you cheering, "yes queens!"

Van Ness has been gracing our screens on Queer Eye for three seasons now, where he's known for tackling hair, upping everyone's skincare game, and rocking only the most fabulous of heels. But when he's not doing all that, apparently he's hanging out with the queens of Capitol Hill. On April 4, Van Ness posted a photo on Instagram that showed him with the rest of the Queer Eye crew, Alexandria Ocasio-Cortez, and Speaker of the House Nancy Pelosi. Let me tell you, this was probably not on purpose, but the three of them were rocking some major spring-time meets Valentine's Day vibes and now I'm thinking about what their crime-fighting/singing trio might be called. "Never been more proud," wrote Van Ness.

I also have never been more proud of something I was not even remotely involved in. Please just take a look at this:

But talking to LGBTQ+ youth wasn't the only thing the Fab Five had going on during their D.C. trip. Interior designer extraordinaire, Berk, offered to remodel Ocasio-Cortez's congressional office while in D.C. In an April 2 tweet, Berk wrote, "Hey @AOC! I’m in DC all week girl! Put me to work! 'Have time... will work for democracy!'" The freshman Congress member seemed up for it. Ocasio-Cortez replied the same day with an "SOS" and an invite to "swing by" the office. She wrote in her reply,

Swing by our office! We’ve barely had time to hang anything up, three of my staffers are expecting babies, and we’ve got a bach pad/warehouse type situation out here. SOS!(The good news is that people are leaving a rainbow of positive post-its on our wall so that’s cute)

Apparently, Berk has actually thought about how he might decorate Ocasio-Cortez's office. According to Architectural Digest, he plans to go all Scandal with it. Berk told the publication on April 3,

I see her office as looking like Olivia Pope’s place: something chic and modern but also highly functional. I know she works long hours, so I’d want it to be a place that she loves coming to and feels comfortable in

The post-its Ocasio-Cortez mentioned in her April 2 tweet to Berk are encouraging messages from her supporters. In fact, there were so many that she actually had to move them inside. Thankfully, Berk has thought about the Post-its too, according to Architectural Digest. “I love that so many people leave her Post-[it] notes," he told the publication. "So I’d like to create a dedicated space for all of her well-wishers to share their thoughts and messages."

TBH, now all I can think about is a spinoff episode where Berk is remodeling Ocasio-Cortez's congressional office. How amazing would that be?