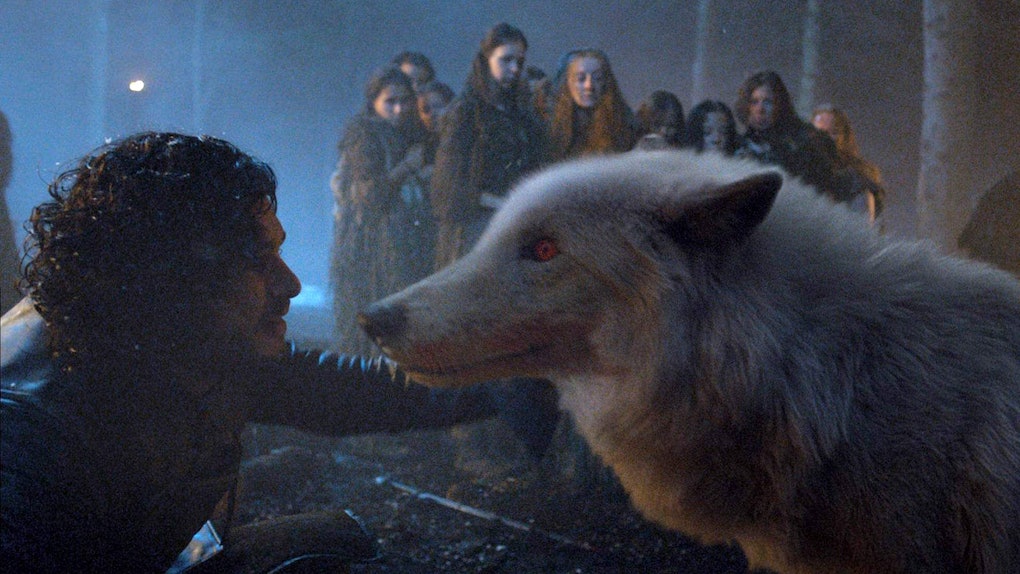 The Starks have a special bond with their direwolves on Game of Thrones, but none of them compare to Jon Snow's bond with Ghost. Although Ghost has been relatively absent in the final season of the epic fantasy series, the protective pup did get a major moment in the fourth episode. Spoiler alert: This post contains spoilers from Game of Thrones Season 8 Episode 4. Jon Snow gave Ghost to Tormund on Game of Thrones and it was the perfect ending for the white direwolf.

Ghost has been at Jon Snow's side throughout the run of Game of Thrones, making him the only direwolf to still be with his Stark into the final season, and definitely the most important of the direwolves. But Jon Snow finally bid farewell to his trusty canine companion ahead of the final battle against Cersei Lannister on the latest episode on Sunday, May 5. Ghost was hugely helpful to Jon in battle the White Walkers north of the Wall and also fought alongside Winterfell's army in last week's Battle of Winterfell, which sadly left him looking much worse for the wear in its aftermath. But now, Jon will be heading into his last battle without Ghost at his side.

After a booze-fueled celebration in Winterfell over the army's win against the Night King, Jon Snow had to say goodbye to his bestie Samwell Tarly and Gilly as they headed home, as well his Free Folk friend Tormund who decided to lead his people back above the wall. As he was saying goodbye to Tormund, though, Jon decided that Ghost would be best off leaving with him to head north. After all, direwolves are native to the far north, and Ghost always seemed most at home when he was above the Wall. Tormund agrees, and Jon takes one last look at Ghost before heading down to King's Landing.

There is still some hope that Jon Snow and Ghost may reunite in the future, though. When Jon describes how much Ghost loves the freedom of being north of the Wall, Tormund notes that Jon also seemed to love that freedom, too. Although Jon does secretly have the best claim to the Iron Throne, he has made it clear time and time again that he has no aspirations for power, and Jon's knowing look to Tormund seems to confirm that his ideal future would be living outside of Westeros' political nightmare and just chilling in the woods with his dog. Maybe once all this warring and Iron Throne-fighting is over, Jon will get the ending he truly wants and head back up north to reunite with Ghost.

As for now, though, Tormund seems like he will be the perfect new companion for Ghost. Plus, Ghost can probably help him out as well, since he is working through a bit of heartbreak after Brienne slept with Jaime rather than him. Tormund may not have gotten the girl of his dreams, but hey — at least he is going home with a really cool new dog! That's something!