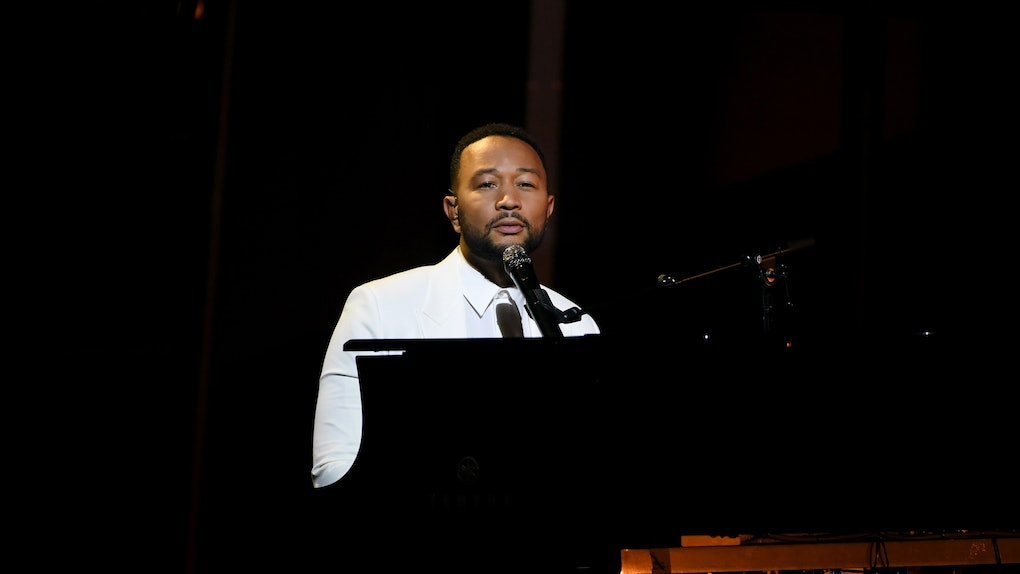 After John Legend and Chrissy Teigen's pregnancy loss in late September, the duo received an outpouring of support from the public, especially from people who had experienced losses similar to the couple's. Teigen originally announced she was hospitalized for pregnancy complications on Sept. 28 with a hopeful Instagram message, but, sadly, days later, she revealed she experienced a pregnancy loss. She penned an essay about the experience of losing her son Jack, and the strain it took on her emotionally on Oct. 27. Now, while doing press for his latest project, Teigen's husband is opening up about how he's processing the loss too. John Legend's quotes about dealing with the loss of baby Jack are heartfelt and hopeful.

The master songwriter and performer took some time away from social media since the loss of his third child with Teigen, but appeared at the Billboard Music Awards for a tearjerking performance of his song "Never Break," dedicated to Teigen.

Now, he's chosen to address many fans' concerns during interviews for his upcoming holiday movie. Legend wrote several songs for the upcoming Netflix holiday film, Jingle Jangle: A Christmas Journey, and has been doing interviews to promote the film ahead of its Nov. 13 release.

"Whenever we go through personal challenges ... I think we have to hold on to what makes us optimistic," Legend told ET about his perseverance during the aftermath of baby Jack's passing. He didn't mince words about the difficulties of the situation, however, he did offer some touching words about how the public's support has affected him and his family.

"We've heard from so many people who have gone through it too, and it's been encouraging to be getting so much love and support from so many people who have experienced similar things," Legend said of the public's support, adding that Teigen's post to social media had the same effect on families struggling with their own losses. In remembrance of Jack, Teigen got a tattoo of his name on her wrist.

While the couple is still processing their loss, the support from their fans has only fueled Legend with optimism; Despite the "tough year" he and his family have endured, he seems determined to keep moving forward.