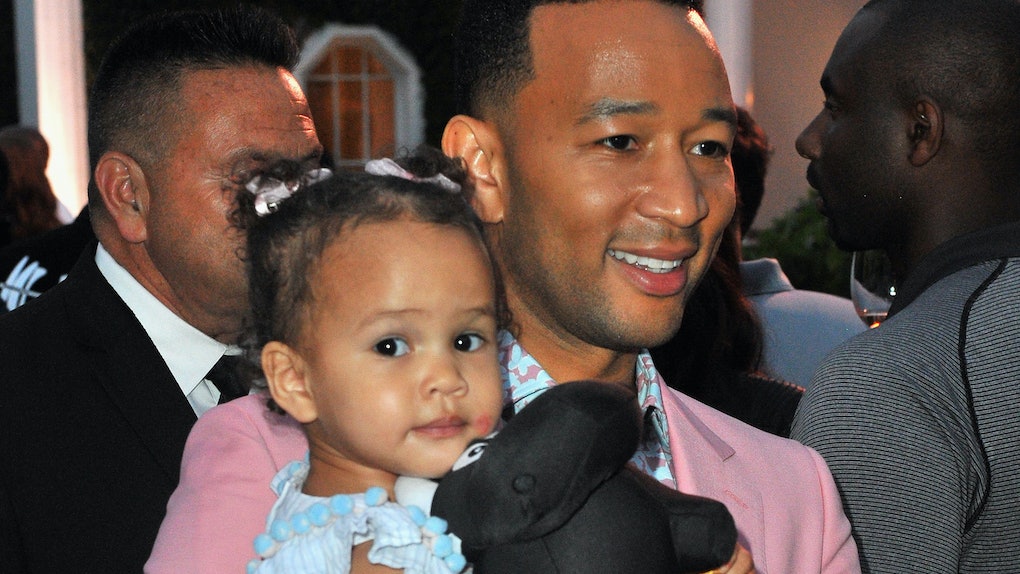 I mostly follow celebrities on social media to keep up with (and squeal at) cute photos of their kids, and there's no better couple to follow for adorable baby and toddler photos than John Legend and Chrissy Teigen. The duo is constantly posting snaps of their baby son Miles and two-year-old daughter Luna, and John Legend's Instagram posts before the weekend were no exception. You have to see John Legend's photos of Luna playing with a red wig, because this father-daughter moment is too sweet to handle.

On Friday, Jan. 26, John Legend posted three adorable photos on his Instagram featuring little Luna. The first one, simply captioned, "Friday night," is a selfie of the two smiling and sitting on a couch. Luna is leaning on her dad and resting her cheek on her hand, and Legend just looks so happy to be there with his little girl. The next two photos are part of one post captioned, "She loves this wig." The first photo of the gallery features Luna in a pink dress wearing a massive red wig reminiscent of Ariel from The Little Mermaid. In the second photo, Legend himself has put the wig on and Luna is grinning ear-to-ear, sans wig, in the selfie he took featuring both of them.

Here are the adorable family pics in all their glory.

After her husband posted the photos, Teigen posted the same photo of Luna in the wig and a slightly different selfie of Legend donning the red hairpiece to her own Instagram account, and she wrote, "[M]y babies are having too much fun without me." Luna appears to be laughing even harder in the photo Teigen shared, and I honestly don't know how anyone could ever top this adorable father-daughter moment.

According to People, Teigen is currently with restauranteur David Chang in Marrakech, Morocco working on a "secret project," so she couldn't join her family for all the wig-filled fun.

Beyond Friday's snaps, Legend's Instagram is filled with plenty of pictures of his son and daughter. On Jan. 6, he posted an adorable picture of Luna perched on his shoulders. A few days before that he shared an image of Teigen Luna on vacation and an adorable photo of Miles sporting a tiny mohawk around Christmas.

Teigen is also a seasoned professional at posting the most perfect photos of her children. A recent post showcased her and Luna at Chicago Kardashian West's birthday party wearing Minnie Mouse ears and a caption that said "Luna looking like she stole something. Happy birthday, Chicago!! Thank you for having us!!" Another photo that featured both Miles and Luna on a sandy beach was captioned, "[T]hese are my kids. honestly so tired of thinking of captions," which is so fair.

Legend isn't only a good dad but he's apparently a super supportive husband too. Last week, Legend helped Teigen untangle her ponytail which was recorded and posted for all of Teigen's Instagram followers to enjoy. Though Legend admitted, “This is very difficult," during the detangling process, he kept at it until he was ultimately successful. He was also in charge of dealing with her jewelry after the Grammy's last year because she was too tired and drunk. These two are serious #RelationshipGoals.

Whether he's helping Teigen untangle her hair or jewelry or trying on wigs and spending some Friday night time with Luna, it's undeniable that Legend is one of the sweetest husbands and dads around.