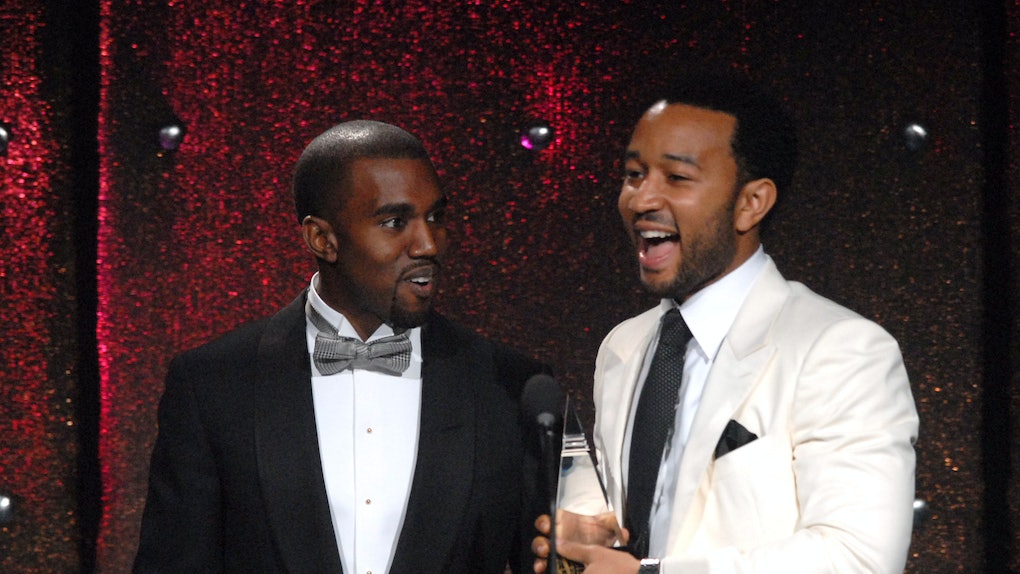 Leave it to John Legend to tell it like it is. The "All of Me" crooner got real about his controversial pal Kanye West during his joint interview with Chrissy Teigen for Vanity Fair's December 2019 cover story. John Legend and Kanye West's friendship status makes total sense.

Legend reflected on his relationship with West and revealed that the two aren't as close as fans thought and never really have been.

“I’m not trying to disown Kanye because I still love him and love everything we’ve done together creatively,” Legend explained to the magazine. “But we were never the closest of friends.”

As for the texts West previously made public on Twitter that showed Legend politely lecturing the rapper about his outspoken support for President Donald Trump, Legend went into detail about his feelings.

"I think what was always challenging about it was Kanye has never been political,” Legend shared. “I don’t think he knows one way or another what policies of Trump’s he likes. He just kind of embraced Trump’s blow-it-all-up spirit and the energy of himself being countercultural in supporting him.”

Legend and Teigen, who have often spent time with West and his wife, Kim Kardashian, also opened up to Vanity Fair about Kardashian's work with Trump on prison reform.

“It’s a cheap win for [Trump],” Legend said. “But the people being granted clemency are real people with families. So even if the clemency is won through his celebrity-whore tendencies, it’s still helpful for that family and that person. At the same time, he’s locking kids in cages and he’s a terrible human being...”

Teigen said of Kardashian's trips to the White House: "To be able to go in there and put whatever you hate about him aside to do this greater good for this person? I don’t know if I could physically muster that smile and handshake.”

However, despite their not-as-close-as-it-seems friendship, Teigen and Legend have spent a lot of time in the spotlight together. From celebrating holidays to birthday parties together and more, the two couples seem to enjoy each other's company.

In April 2018, West and Kardashian were on hand to celebrate Legend and Teigen at an intimate dinner party ahead of the arrival of their son, Miles. The baby bash was even held at Kris Jenner's house.

"I am crazy super anti baby showers for myself. Opening gifts in front of people makes me want to die. Receiving gifts makes me very uncomfortable because i feel blessed to the max already and I really hate writing thank you cards with my poor penmanship. But people I love trick me with dinner invites and they happen," Teigen captioned a sweet Instagram photo at the time. "Thank you to all friends on both coasts, for knowing me exactly. A mellow night of dinner. Cake. And love. That is all I could ever want for a perfect night. ❤️❤️❤️ thank you insanely generous @krisjennerfor opening up your home and getting me every carrot cake in the city and @jenatkinhair for knowing exactly how to lure me out of my home and exactly how to make me happy. ALL LOVE!"

Despite their political differences, it seems like Legend and Teigen aren't turning their backs on West and Kardashian, and those are the kind of friends everyone needs in their life.