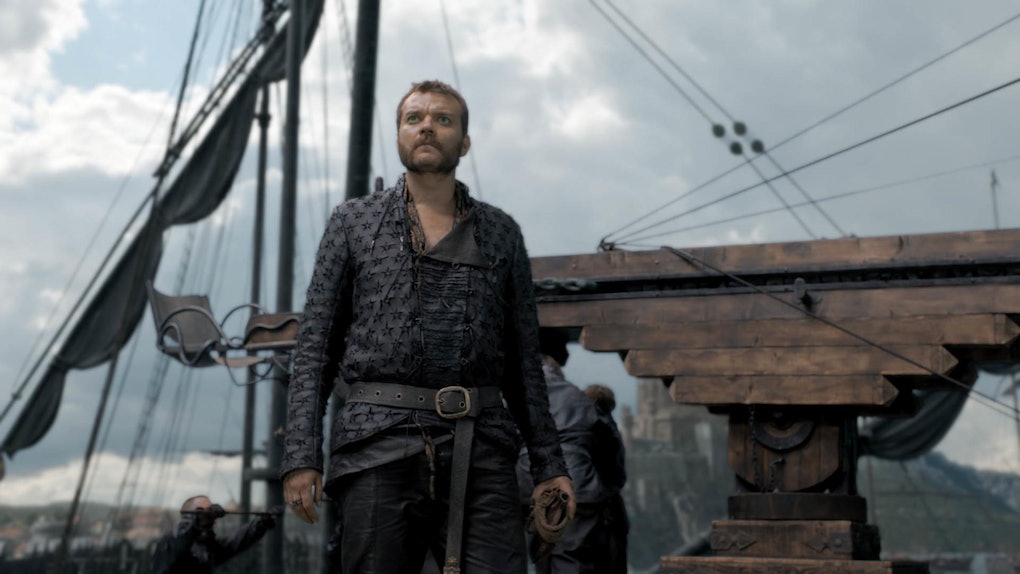 Jaime Killed Euron On 'Game Of Thrones' & TBH, I'm Not Mad About It

No one likes Euron. The self-proclaimed King of the Iron Islands has, much like Dorne, failed to thrill audiences the same way his character failed to thrill book readers. While Dorne crashed and burned early in Season 5 from an immediate overdose, the dislike for Euron took longer. His character started out decent before going downhill in Season 7, and after he killed Rhaegal last week on May 5's episode, that was it. Fans were done. Whatever happened in King's Landing in May 12's episode, Euron needed to go. Warning: Spoilers for Game of Thrones Season 8 follow. The good news was Jaime killed Euron on Game of Thrones, though perhaps not as fans were hoping.

One of the more obnoxious things that made Euron far less appealing was a sudden, out-of-the-blue sexual competition with Jaime over Cersei. Euron, as a dude gone mad from too much time at sea, was one thing. Euron as a wannabe sex god to the mad Queen was quite another. In the end, actor Pilou Asbæk's one-on-one scenes with Cersei actress Lena Headey actually made the bizarre pairing work. But as a set-up to compete with Jaime over her? Not so much.

Most assumed with Jaime's return to King's Landing, he would go straight to Cersei while Euron was burnt to a crisp by Drogon. But that's not how things worked out.

Euron survived his boats being lit on fire, an unfair plot point considering he was the one who took out Rhaegal. Being the sort who looks out only for himself, he didn't exactly hightail it back to Cersei, either. Hearing the sounds of Daenerys destroying the city, he decided to head away from the battle only to run into Jaime, who was following the path into King's Landing after he was locked outside the gates with the crowd.

Euron could have just kept running, but he's always been a jerk and had a real jealous hatred for Jaime. As Jaime tried to pass, he heard the sound of steel unsheathing. Euron attacked.

Bronn wasn't wrong about Jaime's fighting days, and better days were behind him. The fight was ugly from the beginning, and Euron definitely had the upper hand from the start. It wasn't long before he stabbed Jaime in the belly.

Euron made the biggest mistake though, the same one Oberyn did all those years ago. He stayed and crowed about it. And Jaime took advantage. He managed to pull himself up, stab wound and all, and drive his sword through Euron's guts, leaving the Iron Islander to die in the mud.

It's not the way most fans would have wanted Euron to die. Many wanted to see Drogon take him down. Many would have loved to see Jon Snow or Daenerys take him out. A few probably would have argued for Yara or Theon. But that's not how these things work in Westeros. Euron, like Oberyn, was an impetuous fool whose sexual jealousy was his downfall. He may have been left to die, telling himself he's killed the Kingslayer, but it's Euron who will die alone.