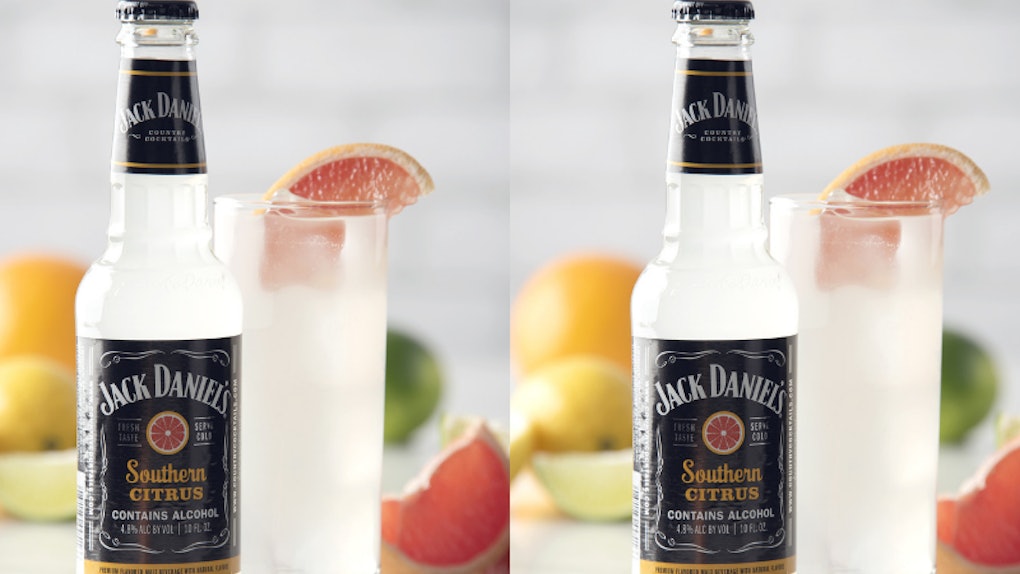 I'll admit that I'm definitely not the first (or even the last, really) to reach for a whiskey-based drink when summer hits, but a new offering from Jack Daniel's might just change that. Hopping on board the rise of malt beverages, Jack Daniel's' new Southern Citrus Country Cocktail features "soft hints of Jack Daniel’s Tennessee Whiskey" in a beverage that basically tastes like a medley of your favorite citrus fruits. With an ABV of just 4.8%, it's a lighter (and more drinkable) alternative that's about to become your new warm weather drink staple.

According to a press release shared on Tuesday, March 7, the beloved Tennessee-based whiskey company will be rolling out a tasty new addition to its Country Cocktail line that's inspired by the flavors of your favorite citrus fruits. With patio season just around the corner, I tend to find myself reaching for lower-ABV sips that are perfect for day drinking or a low-key summer night hanging out with the crew, and the company's specialty malt beverage line — which clocks in at about 4.8% ABV, or about the alcohol content of a beer — is perfect for keeping the fun going for longer. The Country Cocktails line-up already includes eight summer-forward flavors like Southern Peach, Watermelon Punch, and Lynchburg Lemonade, and its newest offering sounds just as drinkable as the rest.

Per the press release, Jack Daniel's Southern Citrus Country cocktail is described as "a blend of grapefruit and citrus flavors, featuring light and crisp citrus aromas." It promises the perfectly toe the line between sweet and sour, and you can expect your sips to be "complimented by soft hints of Jack Daniel's Tennessee Whiskey." Even if you're not a big whiskey fan, this flavored beverage sounds like something you'd happily sip while heading out for some day drinking or while relaxing poolside this summer.

Summer might not officially start until Friday, June 21, but Jack Daniel's is rolling out its tasty offering almost two months early, which means you can plan to grab a six-pack or two to bring to your Memorial Day BBQ if you want to get those patio season vibes started ASAP. Per the press release, the newest Country Cocktail flavor will hit retail and convenience stores "across the U.S. in early May," and the 10-ounce bottles will be sold in six-packs for about $7.99 per pack. I did the math, and that means you're paying about $1.33 per bottle, which is definitely comparable to the price of a six-pack of beers.

Friends of Jack Daniel's Country Cocktails will have a new flavor to reach for this summer. For Southern Citrus, we used the ripe medley of citrus fruits to create the perfect summer drink for easy entertaining at home or enjoying during your favorite warm-weather activities.

While there's no official release date, I'd start keeping an eye out on your next grocery store run as the Southern Citrus six-packs are slated to roll out in stores sometime in early May. Cheers to the start of patio season!