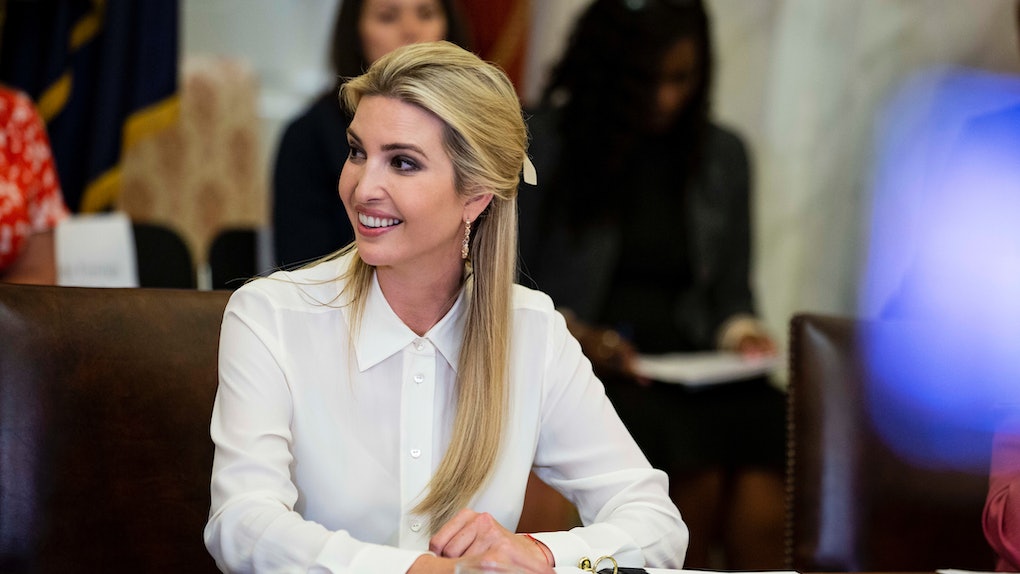 It's safe to say that nearly everyone is tuning into the September Democratic presidential debate, but one member of the first family is apparently choosing a different way to spend their time. While most of Twitter is sharing their commentary on the event, Ivanka Trump's tweet during the Sept. 12 Democratic debate wasn't about the candidates at all. Clearly she went in a different direction.

As the ten qualified Democratic candidates gathered in Houston, Texas to attend the Thursday, Sept. 12 debate, White House senior staffer Ivanka Trump didn't share commentary like the rest of social media. During the Democratic presidential debate on Sept. 12, Trump took to Twitter to share some photos of her meeting with national leaders of her Women's Global Development and Prosperity Initiative (WGDP). According to Trump's post, the White House staffer met with leaders from 18 countries, and the group took some celebratory selfies to commemorate the occasion. Trump's tweet read,

It was a pleasure to meet with the inaugural #WGDP @StateIVLP group of inspiring leaders representing 18 countries! This group of 17 women (and 1 man!) are committed to Pillar 3 - breaking down cultural & legal barriers to women’s economic participation around the world!

It's definitely great that Trump is still promoting her project, but it's some pretty unusual timing. On the night of Sept. 12, pretty much the rest of America was talking about the third Democratic debate, as the country decides who will go up against her own father in the 2020 presidential election. It looks like the first daughter, at least, isn't worried.

President Donald Trump created the WGDP in February 2019, whose mission is to "advance global women’s economic empowerment," according to the initiative's website. According to the government organization's website, this initiative aims to reach 50 million women in developing countries by 2025, and in July the WGDP announced its first funding that would sponsor 14 projects reaching 200 public and private sectors in 22 countries. So far, senior staffer Ivanka Trump has done most of the heavy lifting.

However, the organization is more complex than just funding. The organization's website lists three key pillars that make up WGDP, women prospering in the workforce; women succeeding as entrepreneurs; and women enabled in the economy. According to Trump's post, she met with the leaders who are a part of pillar three, who contribute to breaking down boundaries facing businesswomen across the world.

Truth be told, it's nice to see that actual progress might be happening in this initiative. The Associated Press first reported about Trump launching this organization in January 2019, around the time it was initially supposed to launch. However, it was postponed due to the government shutdown that lasted from Dec. 22, 2018 to Jan. 25, 2019. On Jan. 2, Trump shared a statement with the AP about the initiative. The statement read,

I look forward to continuing to work with the interagency and members of Congress on both sides of the aisle to advance women’s access to vocational training, fuel female entrepreneurship and lift legal and social barriers that restrict our full and free economic participation.

Even though she might not have commented on the Sept. 12 Democratic debate, at least she's distracted by important issues. Take that for what you will.