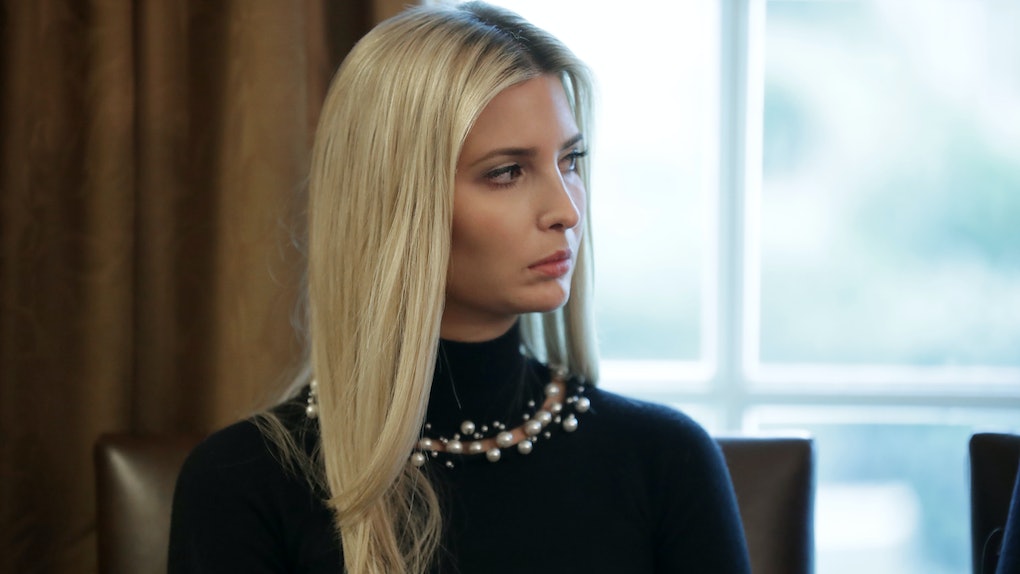 Ivanka Trump's Message On Holocaust Remembrance Day Is A Commemorative One

On Sunday, Jan. 27, the world remembered the 74th anniversary of the liberation of the Auschwitz-Birkenau death camp in what was then Nazi-occupied Poland. According to the Holocaust Memorial Museum, approximately 6 million Jews lost their lives during the Holocaust, and United States government officials reflected on the legacy of the tragedy in honor of Holocaust Remembrance Day. The first daughter was the first of the Trump family to share her thoughts on Instagram and Twitter with the hashtag #WeRemember, and Ivanka Trump's message on Holocaust Remembrance Day pays tribute to the "lives lost to evil," while praising the strength of those who fought back.

Sunday was a somber occasion for the 37-year-old, who converted to Judaism before marrying Jared Kushner, who has taken to social media on previous Holocaust Remembrance Days to reflect on the mass genocide of the Jewish people. On Twitter and Instagram, Trump shared a photo of herself touching what appears to be the Death Wall at the Auschwitz-Birkenau concentration camp, which was where prisoners were executed.

"Seventy four years ago, the remaining prisoners of Auschwitz-Birkenau were liberated. We recognize International Holocaust Remembrance Day to commemorate and honor the lives lost to evil and the strength of those who stood up to confront it. Never forget and Never Again! #HolocaustMemorialDay#WeRemember."

In April 2017, the fashion designer notably shared a Holocaust Remembrance Day statement where she emphasized the need to ensure that such a tragedy never happens again. It was in contrast to the White House's general statement that January, which was criticized for failing to mention Jews or anti-Semitism.

At the time, she tweeted, "I want my children to live in a world where every country and its leaders pledge to ensure a genocide like the Holocaust will never happen again. As we reflect on the Holocaust and its horrors, we must remember that we bear the responsibility to prevent such a tragedy from ever occurring again. We must live and lead by example, today and always."

This year, First Lady Melania Trump and President Trump both followed Ivanka Trump's commemorative message with posts of their own.

"On International #HolocaustRemembrance Day, let us pay tribute to those who were lost and reflect on the tragedy of the Holocaust during World War 2."

Meanwhile, the president took to the social media platform to post a photo of himself, the first lady, and Ivanka Trump attending a wreath laying ceremony at Israel's Yad Vashem in honor of the day of remembrance. He also shared a link to an official White House statement that read:

"On International Holocaust Remembrance Day, we hold in our hearts the memory of every man, woman, and child who was abused, tortured, or murdered during the Holocaust. To remember these men and women—those who perished and those who survived—is to strive to prevent such suffering from happening again. Any denial or indifference to the horror of this chapter in the history of humankind diminishes all men and women everywhere and invites repetition of this great evil. We remain committed to the post-Holocaust imperative, 'Never Again.'"

This year's Holocaust Remembrance Day comes amidst a growth in anti-semitism in recent years. According to findings from the Anti-Defamation League, hate crimes against Jews increased by 57 percent in 2017 and 41 percent of Americans surveyed said they'd never heard of Auschwitz, per Business Insider, making a day to remember those whose lives were lost in the tragedy more important now than ever.