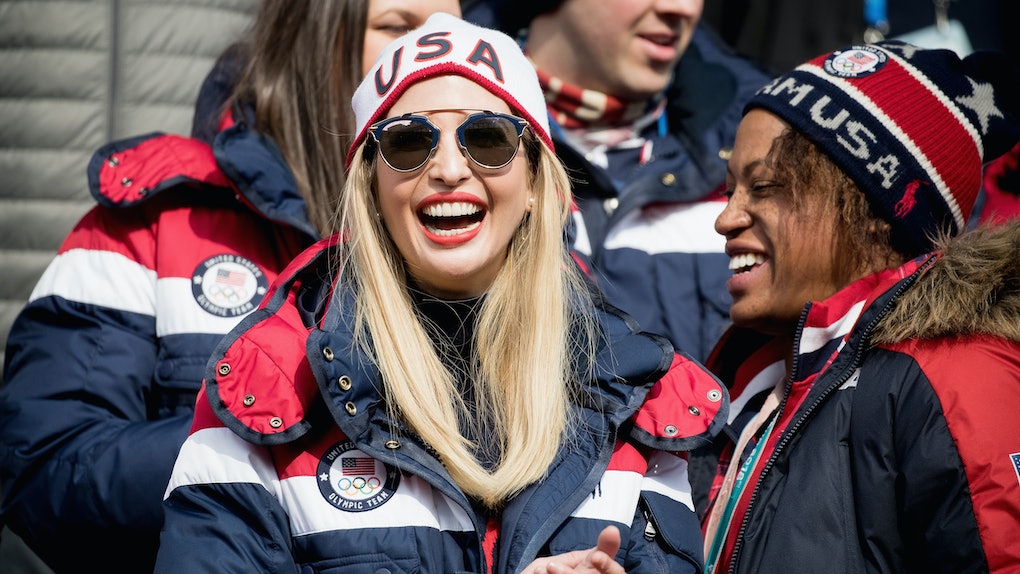 It looks like Ivanka Trump might be getting another perk in addition to her digs in the West Wing. President Donald Trump's new "deal" with China, might provide some benefits for the first daughter, according to Splinter. Ivanka Trump's company is exempt from new tariffs, reports say, so that's something.

President Trump plans to slap China's steel and aluminum industries with some new tariffs worth up to $50 billion dollars, but do you know what will be exempt from those tariffs? Clothing that's manufactured in China. You know whose clothing is manufactured in China? If you guessed Ivanka Trump's, congratulations, you are correct. Products from the Ivanka Trump line are made exclusively outside the United States in countries like Bangladesh, Vietnam, India, Indonesia, and, yes, China, according to PBS. What's more, China also approved three new trademarks for Trump's line in March 2017, so she stands to benefit from clothing being exempt from the new round of U.S. tariffs.

The government used an algorithm to determine which China-based industries should be exempt from the tariffs, to achieve "the lowest consumer impact," according to The Washington Post. They found that those industries just so happen to be consumer goods like clothing and toys. The Office of the U.S. Trade Representative released a statement talking about the tariffs. It reads,

The proposed list of products is based on extensive interagency economic analysis and would target products that benefit from China’s industrial plans while minimizing the impact on the U.S. economy.

To be fair, though, it's not just Trump's clothing line that will be exempt. All companies that fall under exempt categories will be spared. But it does smell a little fishy given the tumultuous history Trump has had with perceived "ethical issues" upon entering the White House.

When President Trump won the election, Trump took on an official role in the White House as adviser to the president. At the time she was also running her company and watchdog group Democracy Forward felt that it was unethical. So, Ivanka Trump started to separate herself from her brand, and even changed her social media accounts to be separate, before stepping down completely in January 2017, according to The Cut.

However, despite no longer being the president of her company, Trump still appeared to be using her public platform to make money for her fashion line, and Democracy Forward published a letter in January 2018 asking that the Office of Government Ethics look into it. Democracy Forward Executive Director Anne Harkavy said,

Ivanka Trump appears to be breaking ethics rules by using her official status to source advertisements that line her pockets. Her official duties are supposed to benefit American taxpayers, and she should not exploit this position for personal financial gain.

In December 2017, The Wall Street Journal took an in-depth look at Trump's outfits across her social media posts since she entered the West Wing in March 2017. They found that Trump was sporting her own brand in about 70 percent of posts. So basically, even though she's not running her company anymore, she's still a walking Ivanka Trump Fashion Line billboard.

Harkavy and Democracy Forward Senior Counsel Robin Thurston also pointed out that Trump knows about branding given her resume. The letter read,

As an experienced business executive in the world of lifestyle branding and marketing, Ms. Trump is almost certainly aware of the myriad ways in which her conduct feeds this ecosystem, and the ways in which she profits from it.

So, what does she have to gain from promoting a company she no longer runs? Thanks for asking. The company is in a family-run trust (looked after by her husband Jared Kushner's family) which means that she still gets paid by the brand as the owner. So, she might not "technically" be the president of her company anymore, but Trump still makes money off it, according to The Wall Street Journal.

The whole tariff thing could just be a huge coincidence, but it also seems awfully convenient if you ask me.