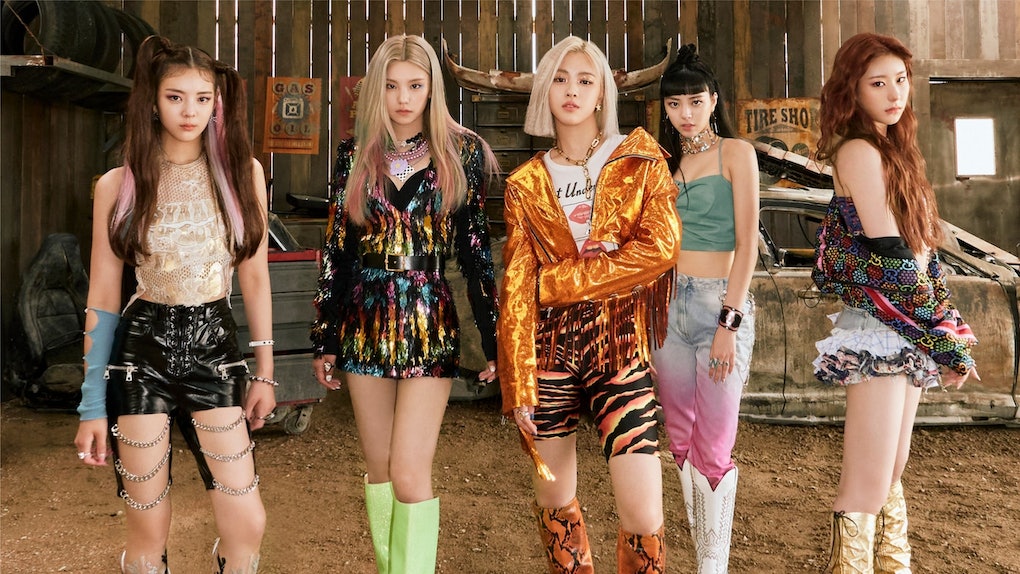 ITZY's "Not Shy" About Creating Their Own Path To Success — EXCLUSIVE

ITZY breathes positive energy into everything they do, from their song lyrics to their energetic personalities. It's what makes them stand out as one of K-Pop's brightest groups. They already know exactly who they are as artists, and they've amassed a large fan base, called MIDZY, who love who they are too. It's hard to believe the group only debuted in February 2019. Fans gravitated toward ITZY because their music promotes self-love. Now, with their latest single, they want to help MIDZY take that love to the next level. Whenever fans struggle to break out of their shells, they can listen to ITZY's "NOT SHY" because it's all about speaking up.

The track comes from ITZY's new EP of the same name, which they released on Aug. 17. With songs like "DON'T GIVE A WHAT" and "LOUDER," one look at their tracklist makes the message they're sending clear: Walk through the world with courage.

Out of all their new material, ITZY thinks "NOT SHY" best represents their album's theme. Some fans may think they're sending the same self-love message as their older songs, but Ryujin says there's one key difference. "'ICY' and 'WANNABE' concentrated on confidence and loving yourself, while 'NOT SHY' is more of a love song that asks you to express how you really feel," Ryujin explains to Elite Daily. "I believe that if you have confidence, so many things will change for the better because you act more positively, like love, for example."

"NOT SHY" isn't just about the lyrics and the beat — ITZY takes their own advice in their work, too. While so many K-Pop groups came before them, they don't try to recreate others' success. ITZY has climbed to the top on their own terms. "I think the reason that I was able to come this far was because I believe in myself," Yeji says.

The members of ITZY embrace their individuality as something that makes them stronger. Yuna says their self-expression shines most in their energetic performances, while Chaeryeong thinks their strengths are in their personalities and overall connection. "I think the synergy when all five of us are together is huge, even though we all have different personalities," Chaeryeong says. "That’s what makes us stand out from other groups."

ITZY's success stories keep rolling in. The music video for their debut single, "DALLA DALLA," accumulated over 17 million views in one day, making it the most-viewed video for a debut K-Pop group within 24 hours. Then, on Feb. 21, 2019 — just a week after their debut — they won their first trophy for "DALLA DALLA" on M Countdown, making them the fastest K-Pop girl group to score a win on a music program. In January 2020, they achieved a Rookie Grand Slam, sweeping the Rookie of the Year prizes at all five major Korean awards shows.

"I was so thankful, and it was incredible," Lia says of their impressive debut year. "I’ll return this love with good energy and good vibes to our fans, so that they will be always proud of us."

Of course, the job of rising to the top of the K-Pop charts isn't always an easy one. "I am motivated to share and do more since our fans really root for us, but that also leads to a lot of pressure that I put on myself, Ryujin admits. "However, the passion I have is much stronger than the pressure, so I pass through the pressure naturally."

Just like they say in their music, ITZY is confident they can get through anything, and they hope they can inspire fans to do the same in their own lives. "Our lovely MIDZY, hard times happen, and I know some of you might be going through them right now," Yuna says. "My wish is for all five of us ITZY members to be your energizer[s], and give you hope and strength to carry on with us. Our precious, one and only MIDZY, we love you."

ITZY's new EP, NOT SHY, is available on all streaming platforms now.