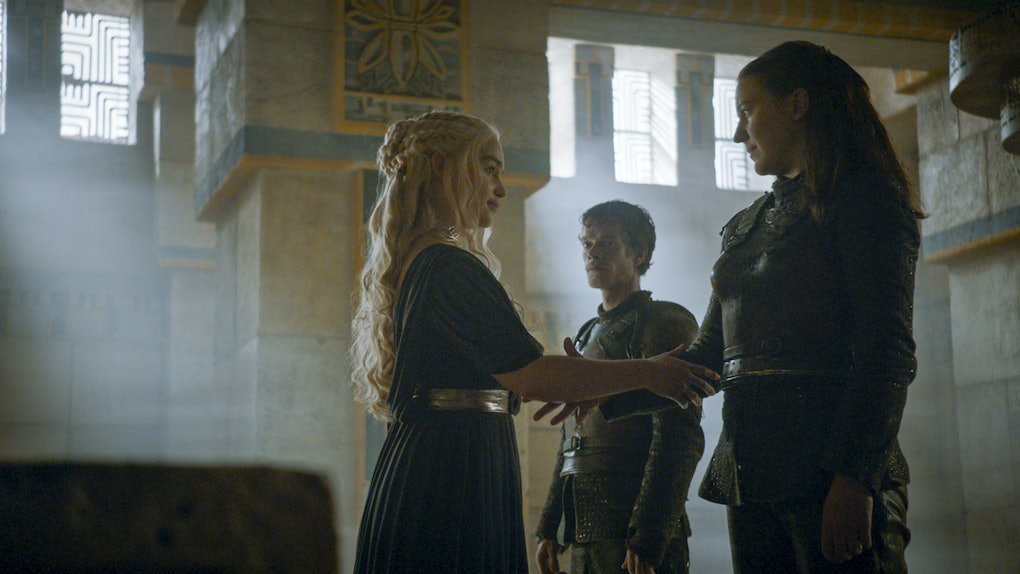 Is Yara Greyjoy In 'GOT' Season 8? Her Absence In The Trailer & Photos Is Worrying Fans

The promotion period for Game of Thrones Season 8 is officially in full swing. Twenty posters cover the majority of the surviving cast, and there's a trailer hinting at the deaths of a few more. However, one character seems to be missing from all the fun, Yara Greyjoy. Unlike the actors who play Euron and Theon, actress Gemma Whelan did not get a picture of her character on the Iron Throne, nor was she part of the Entertainment Weekly spread, or in the trailer. Is Yara Greyjoy in Game Of Thrones Season 8? Did she die off-screen?

This is a genuine concern for fans. The last time anyone saw Yara was back at the very beginning of Season 7. After drunkenly carousing with her crew, her chance at a fun night in the sack was interrupted by Euron's fleet attacking her ships on their way to Dorne. After slaughtering two of the Sand Snakes, and giving the other two over to Cersei as a gift, Euron said he'd be keeping Yara to torture and murder her.

However, at the end of Season 7 Theon, Yara's faithful brother gets word she's still alive and takes a crew to set sail for the Iron Islands to stage a rescue. Fans are hopeful he will succeed. Does her absence mean otherwise?

The good news is Yara's absence isn't some deliberate sign on the part of the production to indicate her character's deceased. In truth, the lack of photos is due to a far more mundane situation. Whelan's been busy capitalizing on her fame as Game of Thrones ends. Before taking the role of Yara, she was a comedian, and everyone knows in comedy, striking while the iron is hot is essential. But it's not the only reason she missed some of the photo shoots.

She also had a baby.

In fact, her Instagram has basically become a babygram since it happened. But her daughter knows her mummy when she sees her.

Fans who haven't been paying strict attention might not have noticed this though, because the rumor mill for "Where's Yara?" has been kicking into overdrive. So much so, Whelan wound up taking to Twitter to let everyone know she was gutted to have to miss the photoshoots, but she would be in the final season, not to worry.

It should be noted Bronn is also missing from the trailer. This is because he's not part of either of those sequences either, as he did not accompany Jaime north at the end of Season 7. (As for why he didn't attend the photoshoots, that is most likely a separate ongoing issue.)

The absence of these characters is due to the trailer's singular focus, not because they are dead. Hopefully, fans will see them all come April 14, when Game of Thrones returns to HBO.