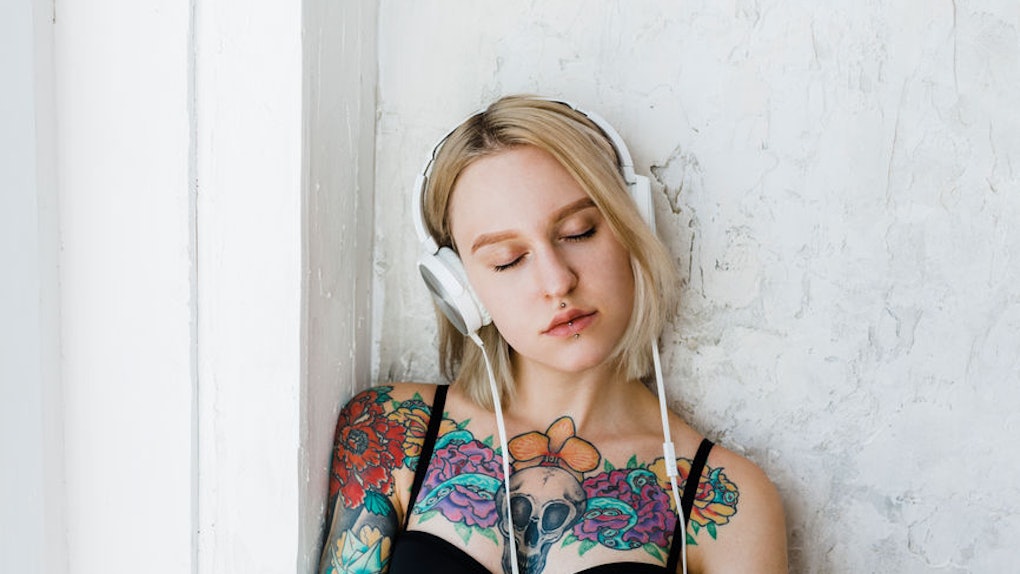 Is White Noise Bad For You? Experts Say It All Depends On How You Use It

It used to be impossible for me to fall asleep unless I had music playing through the night. I’d put my five-CD, disc-changing stereo on repeat, plug headphones into a miniature MP3 that I’d lay at the side of my pillow, and typically end up falling asleep within minutes. The music genre didn’t really matter, although I did somewhat prefer dance tunes to classical tracks. One sound I've never gotten into, however, is white noise. But, as far as new research is concerned, it might be a good thing I didn’t: White noise might be bad for you, in that it can cause that irritating ring that emerges from the crook of your ear — you know, the one that just won’t stop — and it all boils down to how things like loud, whining sounds, like those blaring out of white noise machines, affect your brain. In other words, if white noise has been your sleeping crutch, science is suggesting it might be time to explore the alternatives.

Now, if you or your parents owned a VHS system once upon a time, then you might remember the agonizing, screeching sound of static coming through your speakers at the end of a video cassette, or better yet, the snow screen when ~gasp~ your TV lost signal. That, my friend, is essentially what white noise is, but to get technical, it’s a combination of various noise frequencies that your ears can recognize and hear, according to hybrid mattress and innovative sleep system brand, Tomorrow Sleep’s definition.

White noise is actually everywhere — it’s in the buzzing of a commuter crowd making their way to the train; it’s in the rain drip-dropping outside your window. But these are subtle white noises you might not have even picked up on until now. White noise machines, however, deliver these frequencies loud and clear.

When I first read that listening to white noise through the night could be a major faux-pas for your health, I was honestly dumbfounded. How could something so natural be so bad for you? Well, this is how I’m understanding it: While white noise machines make it easier for light sleepers to drown out any background noise that would otherwise be loud enough to disrupt their sleep, that constant emission of high-pitched static can get to your head, and not in a good way.

In a review article published in the medical journal JAMA Otolaryngology—Head & Neck Surgery, researchers from the University of California, San Francisco explored whether or not white noise can cause tinnitus (aka that constant ringing in your ears). The team analyzed a series of past animal studies that suggested listening to white noise for long periods of time on a consistent basis can affect brain cells, in that it can cause the individual to experience tinnitus, according to ScienceAlert. The outlet explains that the animals were exposed to noise landing somewhere between 60 and 70 decibels (aka a unit of sound pressure), which, the researchers noted in their paper, is about the same level as white noise machines. The study authors also added that this decibel level has been considered "safe" by the U.S. Occupational Safety and Health Administration.

So, from what I understand, more studies need to be done on the subject, especially since these findings come as the result of analyzing only animal-focused research. But there is some truth to the theory, according to Robert Glatter, M.D., an assistant professor of emergency medicine at Lenox Hill Hospital, Northwell Health. He tells Elite Daily that one of the most common causes of tinnitus is long-term, as well as intense exposure to, loud sounds. It really just depends on how you’re using your white noise machine.

“When using a white noise machine at less than 120 decibels, there is minimal risk to your hearing or development of tinnitus,” Glatter explains. But on the other side of that, he adds, if you’re using a machine that is set to greater than 120 decibels every night, then you could potentially damage important hair cells inside your ears, which might eventually result in "temporary or even permanent hearing loss," he says.

So, is white noise bad for you? In some ways, maybe it can be, but in other ways, it seems pretty harmless. If you're someone who absolutely cannot fall asleep without your white noise machine on blast, or you're simply curious to experiment with white noise machines to help you doze off, talk to your doctor about the best way to go about it, and maybe even figure out an alternative that might not be as risky. It's important to be able to fall asleep, stay asleep, and wake up feeling refreshed, but it's also important to obtain that shut-eye in the healthiest, safest way possible.