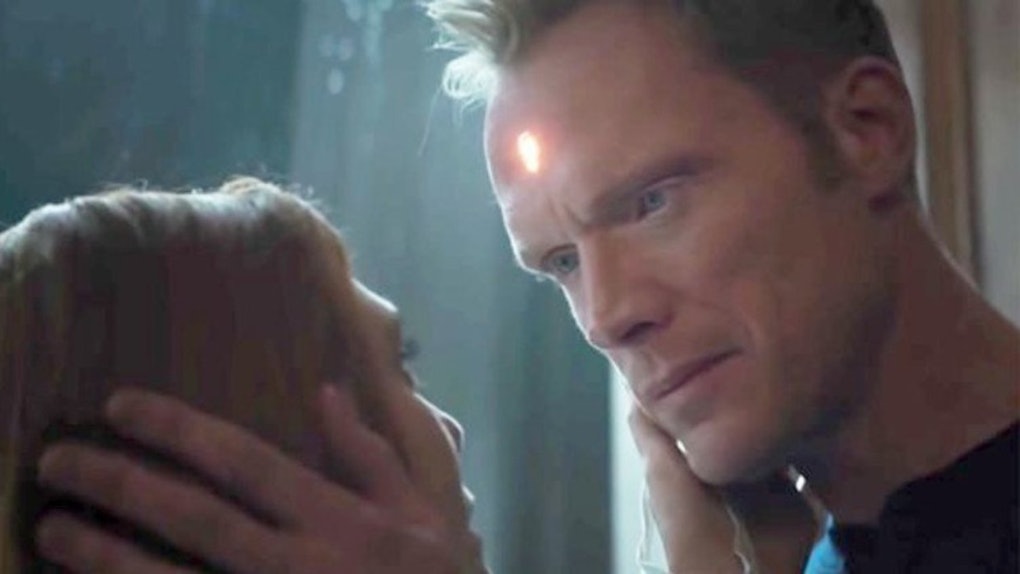 Spoiler Alert: Spoilers for Avengers: Infinity War follow. At the heart of the conflict in Avengers: Infinity War was a fairly new Marvel Cinematic Universe character, Vision. In possession of the Mind Stone, Vision was quickly targeted by Thanos' cronies early on in the film, and although he initially seemed out of the woods as Infinity War winded down, he still met a tragic end that stood apart from other characters' outcomes. So, with only the shell of his body left at the end of Infinity War, is Vision really dead?

Despite their brief romantic interlude in Scotland, Vision and Scarlet Witch/Wanda were quickly caught up in the Avengers' fight to keep the remaining Infinity Stones away from Thanos (Also, am I the only one who would've been more than fine with an entire movie of Vision and Wanda canoodling in Scotland?). Eventually, they, Captain America, Black Widow, Hulk, and War Machine made their way to Wakanda, where they hoped Shuri would be able to peacefully extract the Mind Stone from Vision. Wanda would then destroy the Stone without harming Vision, but the two women's quest was disrupted when Thanos and his army descended upon the kingdom before they were successful.

Such a time crunch forced Wanda to simultaneously destroy Vision and the Mind Stone, but Thanos found the pair moments before Vision's destruction. Using the power of his Stones, Vision turned back time in order to bring Vision back to life and kill him (again) by forcibly removing the Mind Stone from his head. Instead of evaporating into thin air like other superheroes, including Wanda, Vision's body remained on the ground, already lifeless.

Seeing as everyone's fate is quite up in the air for Avengers 4, it's not totally crazy to assume that Vision isn't really dead. Before his human days, the software that formed Vision was seen in Iron Man's AI system J.A.R.V.I.S., with both characters played by Paul Bettany. While Vision was established as a separate person from J.A.R.V.I.S, the fact that his body remains after his "death" suggests that the shell could be used for another computer system.

Throughout the film, characters also wondered if Vision could survive without the Mind Stone, and while Infinity War's ending suggested otherwise, there's always the possibility that the Avengers will discover a new solution in the next film. According to the website Looper, Bettany is scheduled for an appearance in Avengers 4 no matter what, hinting that Vision is either saved or seen in flashback footage. Bettany reportedly confirmed to the website that he filmed scenes for the next film, saying:

It felt like the biggest movie that I've ever made and will ever make, and we've still got to make the [next] one...The call sheets are bananas. When you see the list of cast members, you're like, 'How is anybody else making a film in Hollywood, this year? How are they getting films financed? Everybody is in this!'

Fans have long suspected that time travel will play a major part in Avengers 4. Their theories have only intensified thanks to factors like Benedict Cumberbatch confirming that he was one of the only cast members (if not the sole one) to read the entire Infinity War script. Given that Cumberbatch's Doctor Strange had the Time Stone before giving it to Thanos in exchange for Tony Stark's life, it was previously assumed that Strange would help save the day somehow. As he was one of the heroes to disappear at the end of the film, his fate is just as uncertain as Vision's is at this point.

Luckily, we still have a year to solidify our most valid fan theories. Avengers 4 is in theaters on May 3, 2019.