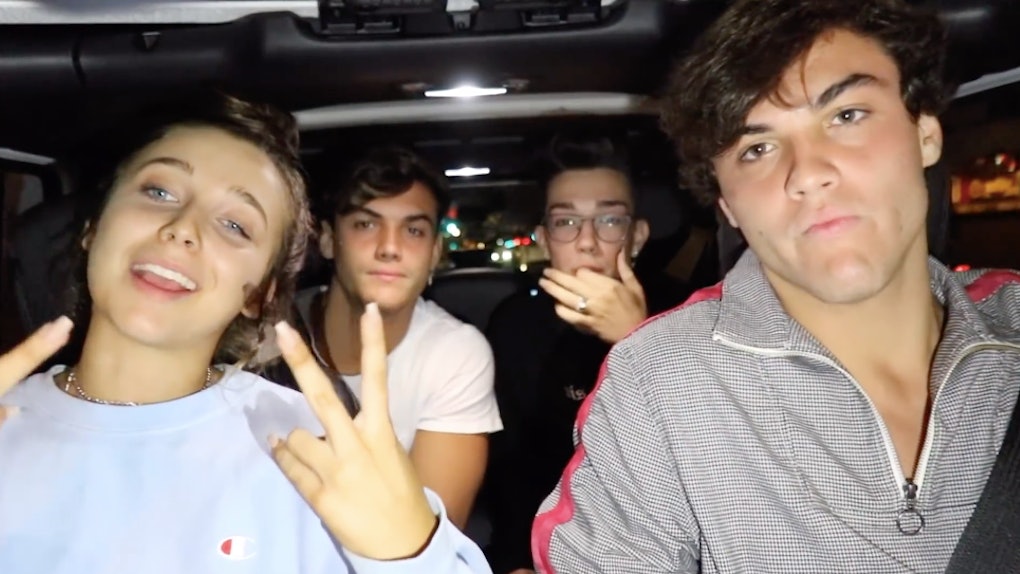 Is The Sister Squad Over? The James Charles Drama May Have Been The Final Straw

I was in a band in fourth grade. By which I mean three of my girlfriends and I decided to call ourselves "Supergirl Shine" and sing Disney songs at recess. I know — you're jealous of how cool we were. Anyhoo, one day my friend Brooke and my other friend Brooke (yes, we had two Brookes, keep up!) got in a huge fight over I have no idea what. But the Brookes basically stopped speaking, and "Supergirl Shine" never performed together again. Still bums me out every time I think about it, so I try not to. Ever since the Sister Squad unfollowed James Charles in the midst of all his drama with Tati Westbrook, though, I've had bad breakups on my mind. Is the Sister Squad over? Like, for real? Because I don't think my fourth-grade self can handle another epic group fallout. Who am I kidding — my adult self can't really handle it, either.

OK, so... I don't know where y'all have been if you haven't heard about all the YouTube drama going on right now, but Westbrook released what was essentially a 43-minute takedown of Charles on May 10 with her video, "Bye Sister," in which she charged him with (among other things) betraying her with his with SugarBearHair Instagram post and attempting to "trick a straight man into thinking he’s gay." Elite Daily reached out previously to Charles' team regarding Westbrook's claims, but did not hear back by the time of publication.

You can watch her full video here:

So yeah, this relationship is pretty much over. I just don't see any coming back from this type of takedown, do you? I mean, the backlash from Westbrook's video has just been so major. Charles lost about 3 million (and counting) subscribers on YouTube. He's been unfollowed by celebs like Shawn Mendes, Demi Lovato, and Miley Cyrus on Instagram. And fellow YouTubers Emma Chamberlain and The Dolan Twins have apparently all unfollowed him at this point, too.

In case you forgot, Charles, Chamberlain, Ethan Dolan, and Grayson Dolan make (made?) up The Sister Squad — a nickname that was born back in 2018 when the four-strong posse first started posting videos together.

Here's another video of the Squad — this one, a compilation of them in better times.

For the record, the relationship between certain Squad members was already all kinds of confusing in the months before the whole Westbrook situation went down, because it looked like Chamberlain and The Dolan Twins were distancing themselves from Charles. I mean, the foursome hadn't posted any new SS content since a video called "Christmas Wish Come True (Meeting Santa!), which was shared on Chamberlain's account back in December 2018.

And remember that time back in February when Chamberlain unfollowed both Charles and the Dolan Twins on Insta, which she later explained away as "a little social experiment for myself."

Fans definitely thought something was up, they just weren't sure what it was. But now that we're all living in a post-"Bye Sister" world, it looks like the pieces are starting to click into place.

Take a look at some of these tweets:

It's not looking good, sisters!

Oh, and here's something else — It turns out that not a single Sister Squad member follows Charles on Insta anymore. Not a single one.

For what it's worth, the Dolan Twins still follow each other on Insta, which I guess isn't all that surprising, given that they're brothers and all.

But while Ethan only follows 36 people on his account, Chamberlain is still one of them:

And Grayson — who follows 38 accounts — still has Chamberlain on there, too:

Emma follows both boys on her account, so I guess her "little social experiment" is finally over.

Anyhoo, it looks like everything is cool with the Dolan/Chamberlain posse, who recently rolled up to Coachella three-strong.

And the trio was also together getting their flips on at some kind of gym on May 15:

The fact that Chamberlain and the Dolan Twins were hanging out together in the middle of all this drama, but didn't speak out publicly on Charles' behalf says a lot, if you ask me. So sadly, it really does look like the Sister Squad — at least, as we knew it — is dunzo.

At least we'll always have their official family portrait.