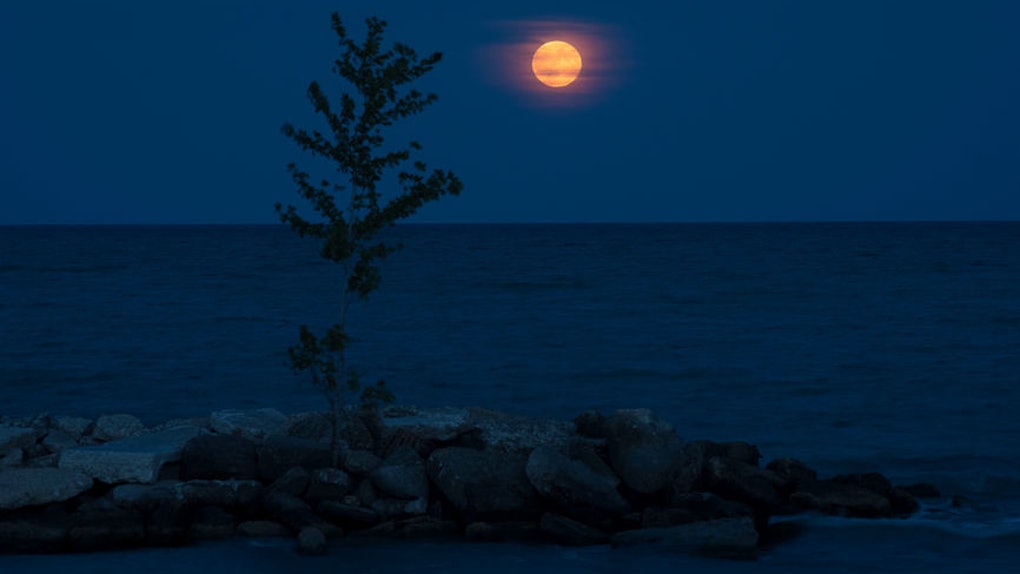 Is The Blue Moon Actually Blue? Here's Where You Can See May's Full Moon

There's a powerful lunation headed our way, and it will adorn the velvet night on Saturday, May 18 at 5:11 p.m. ET. This will be a blue moon, as it is the third full moon of the season. Now, I'm sure you're wondering, with a name like "blue moon," is the blue moon actually blue? The short answer is no, and while the moon may seem like it changes colors from time to time, it actually stays the same color year round. Truth is, the different colors people might view from earth depend entirely on the particular viewing angle, not to mention the composition of the earth's atmosphere. So you could be standing in one spot and view the moon in one color while the person standing next to you may see a different color. It's no wonder this celestial phenomenon continues to create such intrigue.

The term "blue moon" goes beyond the 1943 song, written by Richard Rodgers and Lorenz Hart and popularized by Grease, and the commonly-used phrase "once in a blue moon." The term "blue moon" offers another way of describing a second full moon occurring during one calendrical month in the year. It also is used to describe what happens when there are four full moons in one season (as is true in this particular instance); the third of these full-moon series is referred to as a blue moon. And it won't surprise you that neither of those descriptions have anything to do with the color blue.

All that said, you shouldn't have an issue seeing this full moon firsthand. (For those of you interested, you can view the local times of this celestial event here.) And while we wait for the blue moon, let's take a closer look at this lunation's essence and its overall meaning. The blue moon will occur in the sign of Scorpio, and even if you're somewhat intimidated by the water sign's darkness and smoldering intensity, remember in the end that Scorpio only wants one thing: for us all to rise from our own ashes, like the phoenix.

Remember, a full moon is a symbol of balance, as it takes place when the sun directly opposes the moon. In astrology, the moon is seen as feminine, given its intuitive nature, and general representation of the shadow self. The sun, on the other hand, is considered masculine, as it is our ego and soul purpose in the physical dimension. (The topic of gender, in regard to these luminaries, is far more complex but we'll leave it at that.)

With the sun in practical Taurus, opposing the moon in slithering Scorpio, themes related to life and death will be prominent during this time. Use the time between now and the blue moon to think back to when the new moon in Scorpio occurred in November 2018 — the things you felt then will come full circle nw, serving as a culmination of sorts.

Given that full moons are a symbol of completion and harvest, you may come face-to-face with hidden realities during this full-moon phase. After all, Scorpio rules all that's hidden while Taurus represents the practical and mundane. I don't doubt these luminaries will each shed light on whatever's been quietly brewing beneath the surface in your everyday life.

With Scorpio's planetary ruler Pluto and retrograde in Capricorn, alongside Saturn and the South Node, you'll being asked to release what no longer aligns with your soul truth. And since Taurus governs all things related to beauty, pleasure, money, and values, some of us might feel forced to make the necessary sacrifices as part of our soul evolution. Finding the will to really step out of your comfort zone is key during this time, so use it well.