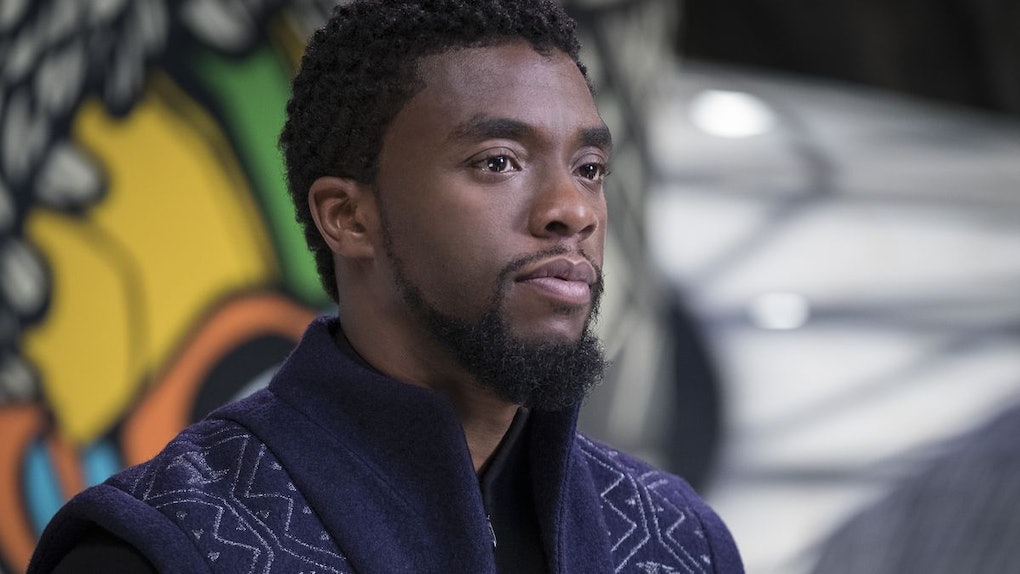 Is T’Challa In ‘Avengers 4’? Black Panther Met The Dreaded Fate In ‘Infinity War'

When Avengers: Infinity War finally reached its segments taking place in Wakanda, the entire audience at my screening was loudly celebrating. Some of the movie's most enjoyable parts were with the beloved Black Panther characters, but things ended on a sour note for some of them. Spoiler Alert: Spoilers for Avengers: Infinity War follow. By the end of the film, Thanos' mission to eliminate half of humanity was underway, and T'Challa seemingly fell victim to the disintegration spreading among the Avengers. However, with his fate a little more ambiguous than other characters', is T'Challa in Avengers 4?

The superheroes descended upon Wakanda for their final faceoff against Thanos, and they devised a plan for Shuri to carefully extract the Mind Stone from Vision and then have Wanda destroy it. The idea failed when Thanos turned back time to remove the Stone himself, brutally killing Vision in the process. Gathering all six Infinity Stones allowed for Thanos to begin vanishing half of humanity, starting with the majority of the heroes nearby. We saw Wanda, Bucky, Falcon, and more gradually disintegrate, and across the universe, even Doctor Strange, Peter Parker, and the Guardians vanished. In the end, only the original Avengers, Okoye, and War Machine seemed to remain, but there are likely other characters who we never caught a glimpse of but still survived Thanos' power surge.

However, for T'Challa, things played out a little differently. In his attempts to physically defeat Thanos, the villain fought back, throwing T'Challa heavily to the ground. T'Challa then seemed lifeless on the ground, but he also vanished, obviously upsetting Okoye, who caught a glimpse of the disappearing act.

The details of T'Challa's "death" are definitely suspicious, fueling speculation about the part he will play in Avengers 4. The Avengers could obviously rescue him somehow, bringing him back to life. Going off the fan theories about time travel's role in the next film, he could appear in flashback footage that the remaining Avengers manipulate somehow.

We're not sure about the context of T'Challa's appearance, but Chadwick Boseman is definitely included in the cast lineup for Avengers 4. Both he and Letitia Wright, who plays Shuri, were spotted on the set of the untitled sequel last fall, confirming both of their involvements in the grand finale Avengers film. Although it's not clear how many other Marvel characters the Black Panther crew will encounter in Avengers 4, Boseman has spoken about how enjoyable the crossover moments are, telling Screen Rant:

It’s fun to see, especially because we have not had a lot of opportunities to work together and when you look at actors that you respect and revere and you see them doing their things it’s not just about the characters but the cast members. It’s fun to listen to people tell stories. It’s a lot of pressure because if you have in another situation, I don’t have time to joke when we are shooting Black Panther, it’s serious all the time. But in this case you don’t have all the weight on your shoulders, so you have more comfort. We’re sharing the weight. Which is actually what’s happening with the superheroes as well, because they could not deal with Thanos alone. I think there is a lot of comfort in having people who are so good around you.

As for the possibility of a Black Panther sequel following the next Avengers film, nothing has been confirmed, but Marvel Studios president Kevin Feige told Collider that it's Black Panther director Ryan Coogler's call:

We definitely want Ryan to come back and that’s actively being worked out right now. When will it be? A lot of it will be when Ryan wants to and not rushing anything, but I think we have an idea of when it will be.

Until Coogler gives us a hint about a Black Panther sequel, I'll be rooting for T'Challa to make it through Avengers 4 unscathed. We all say, "Wakanda forever" for a reason, right?

More like this
'Black Panther: Wakanda Forever': Release Date, Cast, Trailer, & More Details
By Ani Bundel
TikTok's #NotTheMainCharacter Trend Shows The Supporting Role You Connect With Most
By Marisa Casciano
These Tweets About Amy Adams' 'Woman In The Window' Are Brutal
By Abby Monteil
Stay up to date