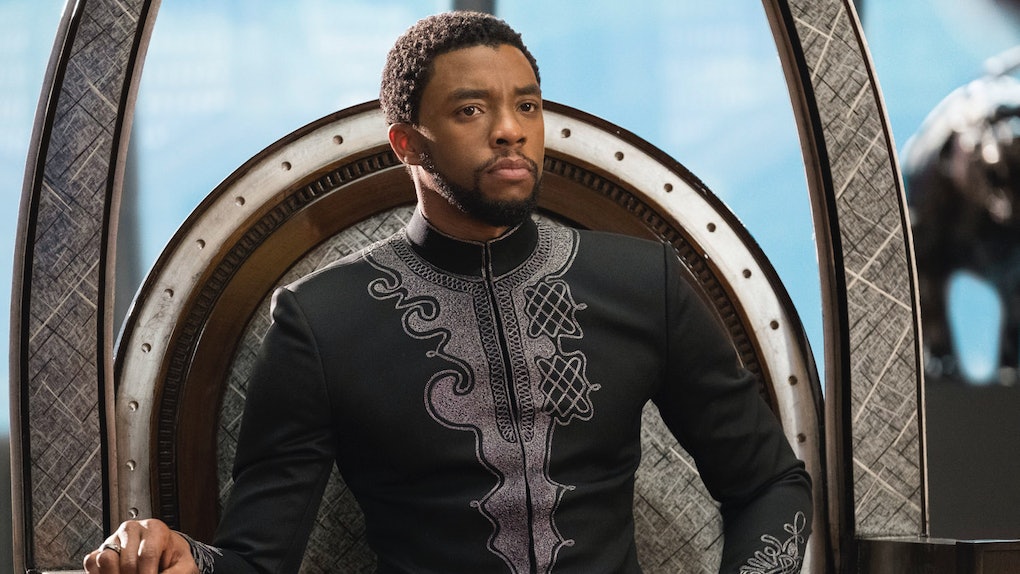 Is T'Challa Dead After 'Avengers: Infinity War'? The Black Panther May Be Gone Forever

Spoiler alert: Spoilers for Avengers: Infinity War follow. I'd call the ending of Avengers: Infinity War a bloodbath, but no blood was actually shed in the all-telling battle between the Avengers and Thanos' army in Wakanda. Instead, the power Thanos gained after capturing all six Infinity Stones appeared to cause the majority of the superheroes present to vanish without explanation. While most of the other characters slowly turned into a dirt-like substance and eventually disintegrated, the circumstances of how Black Panther's T'Challa met his end were slightly different. So, with a specific detail of his "death" in mind, is T'Challa really dead after Avengers: Infinity War?

T'Challa was one of the leaders in the group's epic battle against Thanos' soldiers, seeing as it took place on his home turf, and he stayed active in the war until its climatic shift once Thanos removed the final Stone from Vision. In the Avengers' last attempts to defeat Thanos, T'Challa tried to attack the villain, but was hit, falling painfully to the ground. He was sprawled on the ground, motionless, even when the rest of the gang began disappearing. Eventually, the power hit him as well, vanishing him from his own kingdom.

The survivors of the disappearing act — Captain America, Black Widow, the Hulk, Thor, War Machine, Okoye and Iron Man (in a separate location from everyone else) — then huddled around Vision's body, only emphasizing the hopelessness of the moment.

When it comes to all of these "deaths," every bit of info has to be taken with a grain of salt. The franchise couldn't have truly killed off everyone, right? Could this mean that T'Challa is actually alive? Will we get a "psych!" from him just moments into the Infinity War sequel?

The theory is definitely possible. As of last fall, it appeared that T'Challa, as well as other characters who vanished at the end of Infinity War, was due for a guaranteed appearance in Avengers 4. Screen Rant reported that Chadwick Boseman was on the untitled sequel's set, suggesting that his character just took a bad hit to the head and passed out at the end of Infinity War. However, given the fact that time travel is suspected to play a major role in Avengers 4, this Boseman sighting could mean that flashback footage is being filmed with other supposedly deceased characters.

Following the release of Avengers 4, Phase Four of the Marvel Cinematic Universe is also set to begin. What we know about the projects included in this phase hint that several characters will turn out fine in the next Avengers film. A Spider-Man sequel is supposedly starting directly after Avengers 4 ends, and while they're not all confirmed, sequels to the most recent Marvel films, particularly Doctor Strange and, yes, Black Panther, would be strong contenders for this new period of time. We're not going to pretend that another Black Panther film will be done without T'Challa, are we?

It sounds like Boseman is also up for plenty more appearances as T'Challa, which certainly helps Marvel's top decision-makers determine where the universe's storyline goes. In an interview with Variety, Boseman revealed that he wasn't worried about being typecast as a superhero:

I'm willing to believe that Avengers 4 will include a complex time-jumping story that ensures T'Challa's safety, but we probably won't see an easy route to that point of achievement. Since Marvel loves to tease us, we're likely to believe that T'Challa is dead for some time.

More like this
'Black Panther: Wakanda Forever': Release Date, Cast, Trailer, & More Details
By Ani Bundel
TikTok's #NotTheMainCharacter Trend Shows The Supporting Role You Connect With Most
By Marisa Casciano
These Throwback Jennifer Lopez Movies Are Such A Blast From The Past
By Ani Bundel
Stay up to date