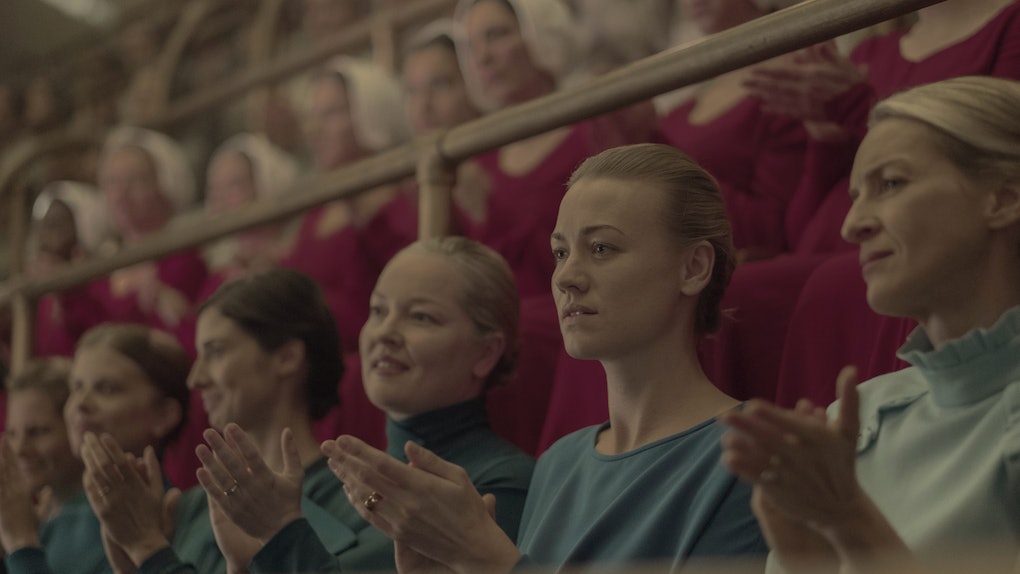 Is Serena Joy Good? This 'The Handmaid's Tale' Theory Is Making Fans Question Everything

The original The Handmaid's Tale novel presented a world viewed exclusively through Offred's eyes only. From her perspective, there was little chance of escape and less hope, as a fertility slave to Commander Waterford. She emotionally abused daily by his mean, infertile wife. When The Handmaid's Tale Season 1 began, Serena Joy Waterford's character was much like her counterpart on the page. But as the series has progressed, other sides of her are revealed, and now, after this week's episode, fans are starting to wonder: Is Serena Joy good? Warning: Spoilers for The Handmaid's Tale Season 2 follow.

One of the benefits of bringing The Handmaid's Tale to the big screen is viewers are treated to a third-person perspective of what's happening in Gilead. That's been a boon for characters like Emily. On the page, when Ofglen gets taken away, Offred never sees her again. On screen, she's had an entire adventure.

It's also provided more shading for characters like Serena Joy. From Offred's perspective in the books, Mrs. Waterford is both much older and simply ghastly. But the show has aged the character down to become someone who is within 10 years of Offred. Seeing things from Serena's perspective, viewers learn a lot of her abusive behavior is the old adage of crap rolling downhill.

In the books, it is suggested Serena Joy was a televangelist type, who preached the coming of Gilead. (Also, "Serena Joy" is actually her stage name. Her real name is Pam.) In the show, Serena is her real name. She was one of those who was instrumental in the creation of Gilead, but not just from a preaching standpoint, but active in the Sons of Jacob, working on the initial plans to create the Gilead government.

But when it came time to enter the new world she worked so hard to build, Serena found herself shut out of the halls of power. Her own arguments were used to trap her in a totally unfulfilling role of "Wife," forced to raise children she can't even have because she took a bullet to the ovary for the cause.

One of the other revelations in Season 2 is a weakening of Commander Waterford as a character. In his home, he's still a manipulative and emotionally cruel man. But outside, viewers have been privy to how much a beta male he is among his peers.

Taken together with Serena Joy's intense frustration with being marginalized and forced to sit in a corner, while a man who is not as worthy as she is is out there failing in the eyes of his peers, this week's twist was a long time coming. With Fred in the hospital, and the family in need of protection, suddenly, Serena is the one giving the orders. She tracks down Nick and has him help her forge papers to have Commander Cushing arrested before he can accuse them of treason.

Serena and June discover there is a desperate truth in the adage "the enemy of my enemy is my friend." More importantly Serena is seeing Offred (or June) as the asset she really is: A good editor who can help her write these orders and step into the role her husband occupies of running Gilead.

As Serena sits in the Commander's chair, viewers can see power suits her. This is where she belongs. But it can't last.

Fred will come home from the hospital, and he will freak out when he realizes his place in the family has been usurped. Serena will be forced to knuckle under to him again. Forced back into second-class citizenship, will Serena see the value in Offred's continuing rebellion? Perhaps finally, she will realize the loss of America was not the glorious revolution she thought, and step up to help take Gilead back down.