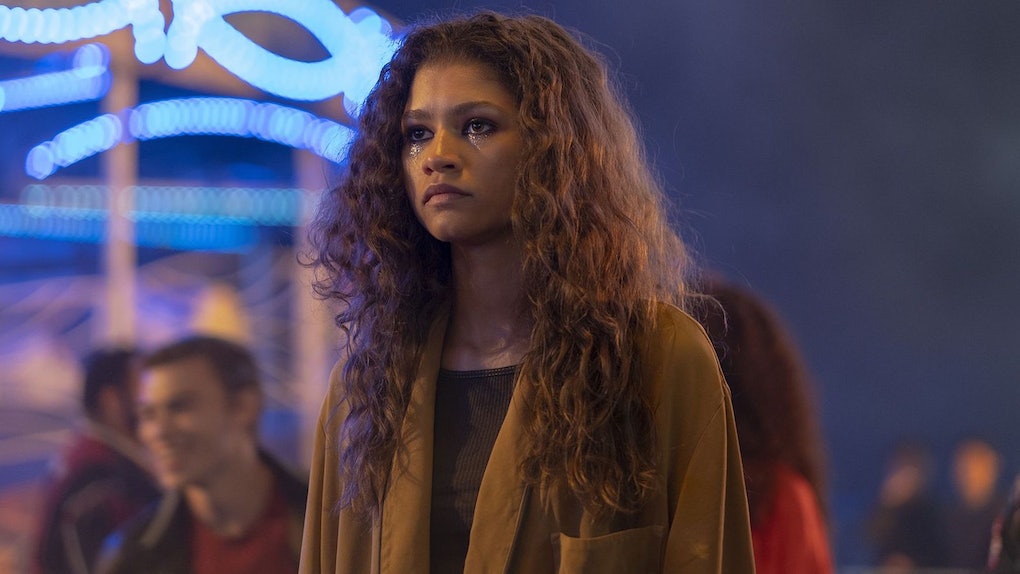 Is Rue Already Dead On 'Euphoria'? This Fan Theory Is Twisted But Convincing

There is so much going on in HBO's new teen series Euphoria, but some fans think that the trippy new show is already teasing out its big finale twist. The show centers on Zendaya's character of Rue, a drug addict trying to get clean, and although her attempts to stay sober for her loved ones appear to be working, Rue may already be doomed. That is because a popular fan theory suggests that the main character is already dead and retelling the final days of her life as a retrospective. So, is Rue already dead on Euphoria as fans have suggested, or is the theory too far-fetched? Let's get into it.

Spoiler alert: This post contains mild spoilers from the first three episodes of Euphoria. Although Euphoria jumps around each episode to focus on the story of a different teenager at the same high school, the show is always narrated by Rue. This narrative device has raised a lot of questions among fans of the show, since Rue relays personal information about her classmates that she would never be able to know, like secrets about Nate's inner life and Kat's private online hustle. Of course, the narration could just be a stylistic decision with no bearing on Rue's actual knowledge, but it has led some fans to theorize that Rue may be dead and is narrating the story as a spirit able to see everything that she could not see when she was alive.

There have been a couple suspicious moments that seem to lend themselves to this theory, as well. Of course, the most glaring is that the series begins by showing Rue had overdosed and nearly died, which sets up the very real risk that she could die if she relapses. Rue also introduces herself as an unreliable narrator, which seemed to be attributed to her heavy drug use, but could also be because she is in the future trying to recall events from her past. And finally, when Fez refuses to sell Rue any more drugs, she pointedly exclaims that she will hate him until the day that she dies.

If this theory turns out to be true, then it heavily implies that the season finale of Euphoria will feature Rue's death. The fact that the eighth and final episode of Season 1 is entitled "And Salt the Earth Behind You" fuels this theory even more.

Of course, Rue's potential death in the first season finale then brings up major questions about whether or not Euphoria will continue with a second season. There are certainly other interesting characters that the show could follow in a follow-up season, but it is hard to ignore that Season 1 has hinged so much on Zendaya's lead role. Another route that the show could go if it wants to continue could be to focus on a new cast of characters, similar to the British teen series Skins, which Euphoria is often compared to.

Fans will just have to wait to see if Euphoria confirms this theory or not in its second half of Season 1 episodes.

More like this
This 'Stranger Things 4' Theory About Eleven's Past Is Super Dark
By Ani Bundel
The 'Cruel Summer' Season 1, Episode 5 Promo May Hint At That Mirror Theory
By Rachel Varina
Netflix's 'Bridgerton' Spinoff About Queen Charlotte Will Deliver So Much Royal Drama
By Cianna Garrison
Stay up to date