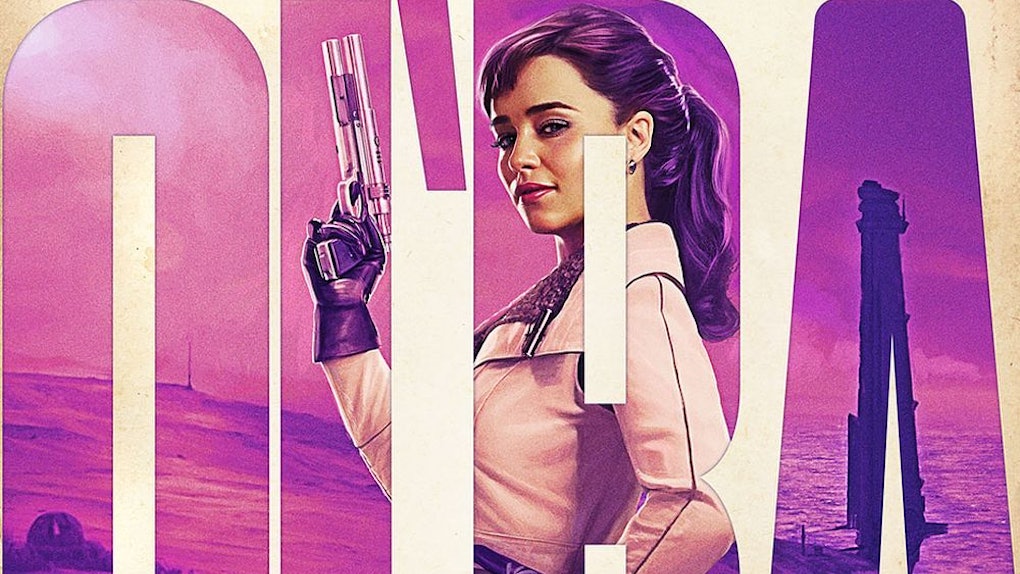 Is Qi’ra A Sith? 'Solo: A Star Wars Story' Ends On A Major Cliffhanger

Fans walked into Solo: A Star Wars Story thinking they knew how this song was played. Han turns to smuggling as a way to pull himself out of a terrible childhood. On his journey, he meets his BFF-to-be Chewie, finds his childhood love Qi'ra, is introduced to Lando, and winds up winning the Millennium Falcon. But the end of Solo wound up with a surprising twist, linking Han's adventure with not only events in the future, but the events of the past as well. Moreover, they left audiences with a huge question: Is Qi’ra a Sith? Warning: Spoilers for Solo: A Star Wars Story follow.

When Han finds Qi'ra, he discovers in order to get off Corellia, she's thrown down her lot with a gang known as "the Crimson Dawn," run by Dryden Vos. Vos is the big time gangster Beckett is working for, and the enormous shipment of coaxium they fail to get is for him. But Vos is actually just a medium-sized shark in these Imperial infested waters, one who answers to an even larger fish, which, as is hinted all throughout the film, is some arm of the Empire. The coaxium isn't for Vos, it's for his employers.

Han's plan to keep the coaxium out of the hands of the Empire so Enfys Nest can start a rebellion, as well as free Qi'ra from under Vos' thumb, doesn't quite go as designed. But for all the unexpected twists and turns, the outcome he desires does occur: Vos is dead, and the coaxium leaves the planet with Nest.

What he doesn't foresee is Qi'ra, once freed from Vos' control, would choose to stay and head up the Crimson Dawn herself, instead of grabbing her chance at freedom and the terrible uncertainty that comes with it. When Qi'ra makes the choice to stay and call in Vos' death, declaring herself the head of the Crimson Dawn, viewers finally discover who she's working for: Darth Maul (still played by actor Ray Park).

For Star Wars fans who have only seen the movies, this might come as a serious shock. Darth Maul was a vaguely explained baddie from Star Wars: The Phantom Menace, who worked for Attack of the Clones' antagonist Count Dooku. Maul's main functions in Phantom Menace were to be a "Man In Obviously Evil Makeup" and announce Anakin Skywalker was "The Chosen One" before Obi-Wan cut him in half and killed him.

So how is Maul still alive? When it came time for the Star Wars animated TV spin-offs, he was too good of a bad guy to just get rid of. So the canon rewrote the ending, saying he survived because he was too strong in the Dark Side of the Force and the lightsaber "cauterized" his wounds (or something). Instead, he was sent into exile after "the loss of his legs." He's been wearing cybernetic legs in the cartoons for years, all while bedeviling those on the side of good.

So does this mean Qi'ra is a Sith? In short: No. The Sith are the Dark Side's answer to the Jedi. Qi'ra doesn't have Force powers. I'm not saying she isn't an impressively trained fighter in the scene where she kills Dryden, but this is a sword, not a lightsaber. She's just been very well trained in the art of murdering people with oversized knives. That does not make her Force-sensitive or trained in the way of the Dark Side.

So why choose to answer to Maul, if she's not one with the Dark Side? Beckett answered this already: Qi'ra is a survivor. As she tells Han, everyone answers to someone, and the point of the game isn't to win. It's to stay alive and in it for as long as possible. She got herself off Corellia by making a deal with the devil. It's the devil she knows, and it's the devil she's sticking with.