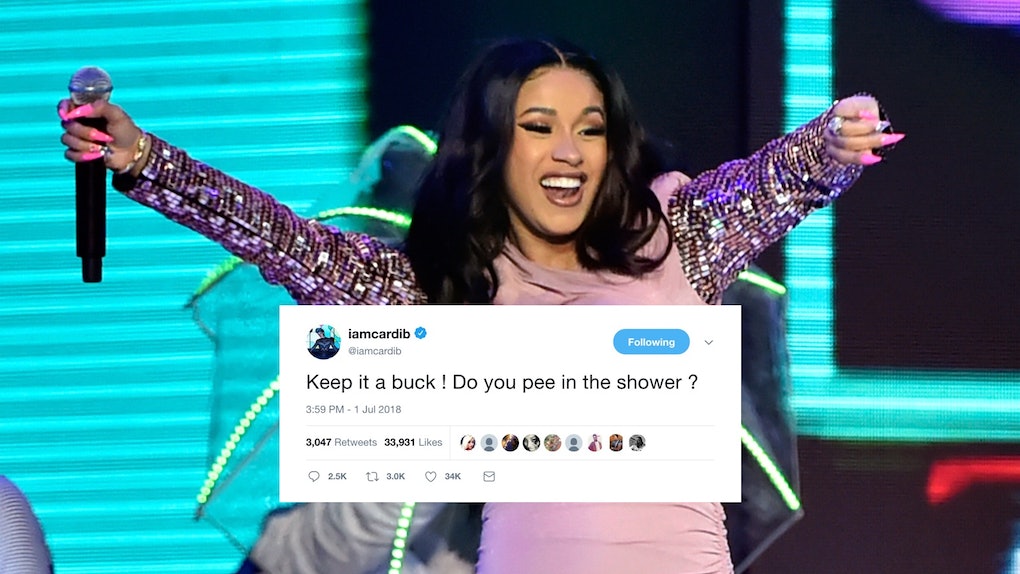 Is Peeing In The Shower A Bad Thing? Cardi B's Tweet Probably Has You Wondering, So Here's The Deal

Cardi B is one of very few people in her industry who is authentically, unapologetically herself in a way that inspires fans to feel like they can live their lives unashamed of who they are, too — no matter what dirty little hygienic secrets they may be harboring. When the 25-year-old rapper asked fans on Twitter if they pee in the shower on July 1, I was half face-palming, half reading responses in between my fingers. I mean, if you have to go, you have to go, right? Still, I’m wondering if peeing in the shower is a bad thing in terms of, you know, personal hygiene. Even if you really have to go, should you resist the temptation and hold it until you’ve washed up and can get to a toilet, instead?

Trust me, as someone who’s dealt with a bad case of IBS all her life, I know all about funky bathroom behaviors. However, there’s a difference between accidents, emergencies, and just straight-up being too lazy to turn off the water, hop out of the shower, and pop a squat on the toilet. You don’t even have to throw on a towel if you don’t want to. Look, if you’re trying to save time in the morning, I guess I can understand peeing in the shower to save an extra few minutes — but I’m just thinking about your health here.

When Cardi B asked her Twitter followers if they pee in the shower, the masses were quick to weigh in.

In case you're wondering, Cardi's fans aren't wrong: Peeing in the shower is totally normal, healthy, and even great for the environment.

Don’t @ me for saying this, but I’ve actually never peed in the shower, if not for any reason other than being too shy or feeling too awkward about it, so props to all of you out there reading these tweets and nodding along in agreement. Personally, I’ve always thought peeing in the shower was just something you did not do. Showers are for washing, toilets are for doing your business — right? Apparently, though, I’ve been misinformed, missing out, or a combination of both, because it turns out a lot of people pee in the shower and live to tell the tale. In fact, if you pee in the shower, you might actually be a genius.

Letting your pee go and flow down the shower drain is no faux-pas, my friends, and if you thought it was a lot for 2,000 people on Twitter to support the idea, check this out: According to Shape, a 2016 survey from Angie’s List revealed that a whopping 80 percent of adults have peed in the shower at least once in their lives. What's more, Philip Werthman, M.D., a urologist and director of the Center for Male Reproductive Medicine in Los Angeles, California, told the outlet it’s actually not as gross as some might assume: While it's true your urine is full of bacteria, Werthman explained, so is the sweat trickling down your forehead and in between your chest after a workout. “At the end of the day no one is getting sick, so it's fine,” he told the magazine.

The man makes a compelling argument, and I mean, if you’ve ever peed your pants from laughing so hard (now that I’ve definitely done), what’s the first thing you did as soon as you got home? You probably hopped into the shower, right? I guess it’s the same concept. Still, it’s totally OK if the mere thought of urine trickling down your leg freaks you TF out. You don’t have to pee in the shower, but you also don’t have to feel weird about releasing a tinkle once or twice (or all the time) behind the shower curtain either.

And while I'm on the subject of urine being sanitary, I might as well debunk the myth that wiping with a piece of dry toilet paper is the most efficient way to clean up after using the ladies' room, too. Think about it: There has to be a reason why women are encouraged to wipe front to back, and that’s because toilet paper kind of just moves bacteria around a bit, and isn't always successful in fully cleaning up these sensitive areas.

After you go to the bathroom (especially for women), OB-GYN Alyssa Dweck, M.D., told Men's Health, the goal is to reduce the risk of grime weaseling its way into the wrong area down there and causing some kind of infection. Of course, this isn’t to say you should be pooping in the shower (that’s another article for another day), but rinsing with good ol’ H2O is likely going to be a lot more hygienic than dabbing with rolls of toilet paper.

Plus, peeing in the shower is not only OK, it's actually really eco-friendly, so you can pat yourself on the back for doing something good for the environment and saving money on your water bill. You probably don't think about it on a regular basis, but according to the U.S. Environmental Protection Agency, Americans use about 300 gallons of water per day. Twenty-four percent of that usage comes from flushing the toilet, while only 20 percent comes from the shower. Now, I'm not great at math, but from the looks of it, if all of us were to use the shower as a toilet, too, a lot less water would be wasted, and that in and of itself amazing.

Hm, maybe it's time I did my part for the environment, too.

More like this
25 Instagram Captions For All Your Shot Girl Summer Pics
By Corinne Sullivan
TikTok's Viral Ranch Pickles Recipe Is A Big Dill, & So Are These Other Pickle Recipes
By Marisa Casciano
These Tweets About “Disaster Girl” & Her $500K NFT Are Hype For Her Reward
By Cianna Garrison
Stay up to date