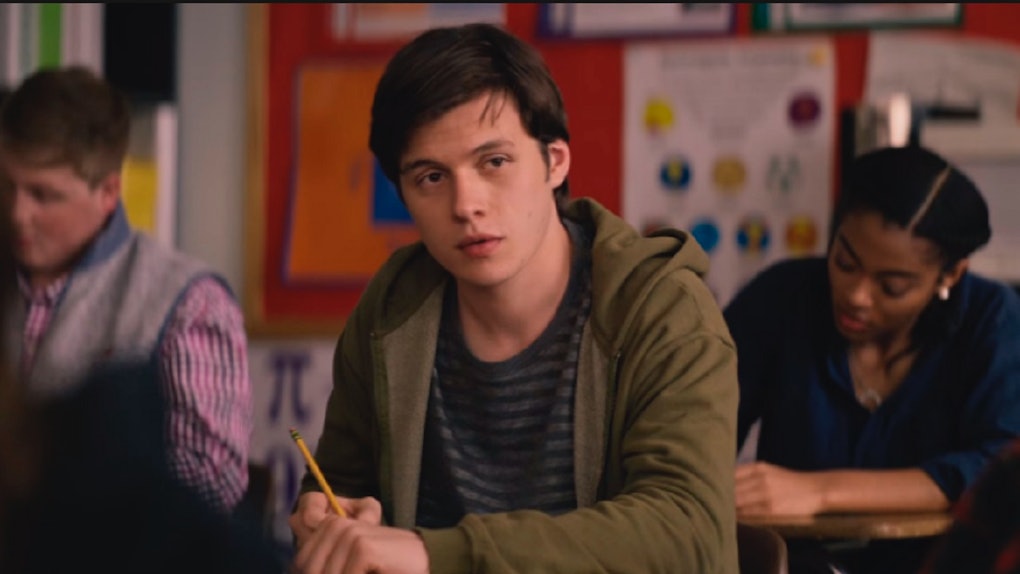 Is 'Love, Simon' Based On A True Story? Fans Are Loving The Coming-Of-Age Film

The new film Love, Simon has provided what the film industry seems to have lacked previously: a contemporary gay teen romance. Spearheaded by Life As We Know It director Greg Berlanti, Love, Simon introduces viewers to its titular character, a closeted gay teenager whose emails with an anonymous classmate in the same situation soon threaten to expose his true identity. The coming-of-age film debuts on March 16, but fans are already loving the movie's message. Given how universal the concept is, is Love, Simon based on a true story?

Maybe this is just me, but I love going into a movie knowing as much as possible about its origins and how it came to be. Did cast members talk to real people who, like Simon, grew up gay in a southern community? Were any similar movies recommended to the cast before filming began? Less seriously, did any younger cast members ask Jennifer Garner to recreate the "Love Is a Battlefield" scene from 13 Going on 30?

Blame it on being a part of the Harry Potter generation raised on behind-the-scenes featurettes, but I crave the obscure details of a movie project. With Love, Simon joining such an underrepresented genre, here are five things to know about the film before you see it in theaters.

1. The Movie Is Based On A YA Fiction Book

Becky Albertalli's debut novel Simon vs. the Homo Sapiens Agenda was originally released in 2015 to overwhelmingly positive reviews. In addition to writing YA novels, Albertalli is also a clinical psychologist who once helped lead a support group for gender-nonconforming kids in Washington, D.C.

Her second book, The Upside of Unrequited, was published in 2017, exploring other aspects of teenage anxiety. One of the book's characters is even loosely connected to Simon vs. the Homo Sapiens Agenda, and Albertalli has hinted that her third book will take place from another familiar character's POV. Maybe these sequels even have a chance of receiving movie adaptations!

2. Jack Antonoff Played A Huge Part In The Film's Soundtrack

Not only did he executive produce the movie's soundtrack, musician Jack Antonoff also worked on several of the film's songs with his band Bleachers. Recently performing "Alfie's Song (Not So Typical Love Song) on The Tonight Show Starring Jimmy Fallon, Antonoff actually co-wrote the song with Harry Styles. Antonoff, who is used to working alone, spilled about co-writing "New Year's Day" with Taylor Swift, but his reflection on working solo definitely applies to working with Styles too:

When I first started writing, I always wrote my own songs, which was a lonely process. I only work with one other person, so you can say something and not feel embarrassed.

3. 'This Is Us' Producers Wrote The Script

Yup, you read that right. This Is Us co-executive producers and showrunners Isaac Aptaker and Elizabeth Berger were in charge of adapting the original novel into a movie. The pair have co-written some of the most heartbreaking This Is Us episodes, including "The Car," "Jack Pearson's Son," and the Season 1 finale "Moonshadow." They also wrote this week's Season 2 finale "The Wedding," so it's safe to say that Berger and Aptaker can totally deliver huge emotional bombshells. I don't know how faithful Love, Simon will stay to the book, but you might have to bring some precautionary tissues if Berger and Aptaker adapted the story.

In an interview with Vanity Fair, Berlanti, a gay man who understood the importance of telling this story, talked about his mother's influence on the film. Previously diagnosed with stage IV lung cancer, her impact unconsciously came across in some of the film's heartfelt moments with Jennifer Garner, who plays Simon's mother. Speaking about her death, Berlanti said:

5. Young Cast Members Chose To Do The Film Because Of Its Potential Impact

It looks like Love, Simon is the perfect solution to filling the This Is Us-shaped hole in our lives once its finale airs this week. Audiences may be more likely to cry happy tears, but those are sometimes the best kind, right?