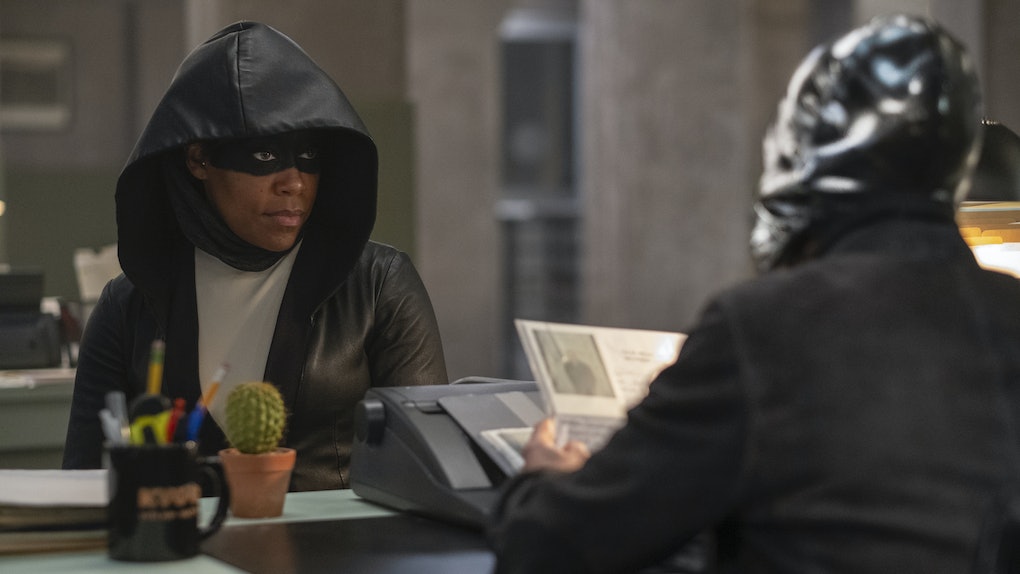 Is Looking Glass Dead On 'Watchmen'? The Truth Behind 11/2 Might've Killed Him

Watchmen has had its share of cliffhangers. From Episode 2's removal of Will Reeves via what looked like an alien spaceship, to Episode 3's return of the SUV with mystery pills, this show knows how to keep the audience coming back. But Episode 5 took it a step further, leaving viewers wondering, is Looking Glass dead on Watchmen?

Warning: Do not read on if you're not caught up. I'm totally serious. So many spoilers for Watchmen follow.

This week's episode focused on the story of Wade Tillman, aka Det. Looking Glass. In Episode 4, Laurie Blake said that superheroes wear masks to hide from the pain, and for Tillman, it's true. He never got over being one of the sole survivors of 11/2, protected from the psychic blast by the mirrors that surrounded him inside the carnival funhouse. He lives in terror of the next "alien monster," falling through a dimensional hole, killing millions, which is why he has a bunker and an alarm system at the ready.

His "reflectatine" mask is an homage to his survival, but he also believes will keep him safe when the next "big one" hits. That's why he never takes his mask off. It's also why his wife left.

Divorced and living alone, Tillman devotes his off-hours to running extra-dimensional anxiety support groups. It's there he meets a beautiful blonde who takes him drinking. But as she and her friend drive off, a head of lettuce falls out of the truck, marking this as the 7th Kalvary truck that killed a cop in the season premiere.

Tillman tails them, only to discover they're playing around with a portal just like the one supposedly responsible for the alien monster teleporting into NYC. Also, they're expecting him.

The Kalvary is run by Sen. Joe Keene Jr., who claims to be trying to control the group. But Keene laughs at the idea they're planning to drop a squid on Tulsa. Instead, he puts on a video for Tillman; one Keene first saw a couple of weeks after becoming Senator.

It's Adrian Veidt, recorded 30-odd years ago, on Nov. 1, 1985, addressed to Robert Redford, to be played on the occasion of his inauguration in 1993. Veidt claims he engineered Redford's election. Tillman realizes in horror the one-eyed squid that hits NYC the next day is sitting behind Veidt. It's proof he was behind the hoax. It also proves these small portals that can barely send a basketball into the next room had nothing whatsoever to do the tragedy. No wonder Keene laughed.

Tillman is shattered. He sits at his desk the next day, a shell of his former self, his face still covered. He does as Keene ordered, setting Sister Night up to walk into a trap, where Blake arrests her for impeding the investigation and sheltering Reeves from justice. As Angela frantically downs her grandfather's pills, lest they fall into the wrong hands, Tillman watches as his only friend in the world is dragged off.

Arriving home, Tillman discovers the new squid alarm he ordered, which he starts to toss in the trash, before thinking better of it. But as he goes inside, the 7th Kalvary pull up, armed with shotguns, and storm the house.

Will Tillman fight back? Hide in his bunker? Escape? Or will he brokenly just let them take him out?

More like this
8 Theories About The 'Gossip Girl' Reboot That Simply Must Come True
By Rachel Varina
'Cobra Kai' Season 4: Netflix Release Date, Cast, Trailer, Plot, & More
By Ani Bundel
What Happened To The Waterfords In 'The Handmaid's Tale' Season 3? A Lot, TBH
By Ani Bundel
Stay up to date