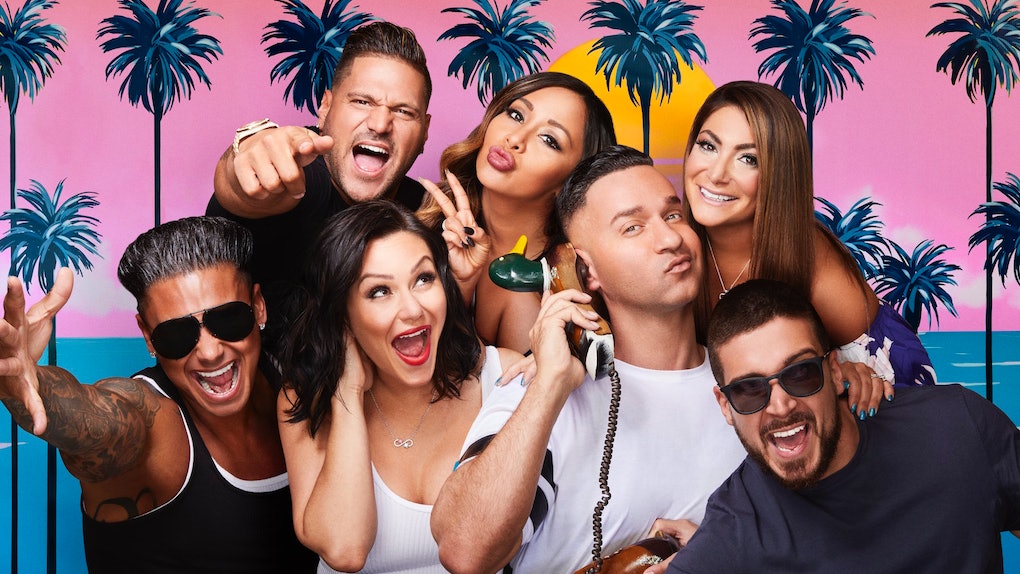 Is 'Jersey Shore Family Vacation' On Hulu? 4 Ways To Stream The Epic Reboot

At the moment, only the original MTV series is on Hulu, so if Jersey Shore Family Vacation somehow isn't doing it for you, you can throw things back to the cast's Florence fails, Shore Store sales, or Seaside Heights shenanigans any time. Perhaps the show having a spot on Hulu means that Family Vacation will end up on the streaming site eventually, but it's still a little early for it to pop up on major streamers like Hulu or Netflix.

But if you happen to miss out on the new show on Jerzday Thursdays, there are still plenty of ways to stream Jersey Shore Family Vacation so you know just how much GTL-ing the cast is up to nowadays.

On iTunes, you can currently buy a $20 season pass to Jersey Shore Family Vacation that allows you access to all current and future series episodes in HD. For SD versions, the pass runs at $19. Individual HD episodes, including pre-season retrospective footage about the original series, are available for $2.99 each, while SD episodes each cost $1.99. I can't imagine the last time I bought a TV show for my iTunes library, but if I miss a key episode's airing on MTV, it may have to be my go-to spot to catch up.

Like with iTunes, Vudu offers a $19.99 flat rate to buy the entire first season of Jersey Shore Family Vacation in SD. You can buy a single episode for $1.99 or $2.99, depending on its quality, while the reflection episodes are offered for free. Signing up for a Vudu account is totally free, so you can spend as much or as little as you want on Jersey Shore Family Vacation episodes without worrying about a new regular streaming charge.

OK, so actual episodes of Family Vacation have yet to appear on MTV's website, but I feel like they're bound to pop up sometime soon. Right now, only the Road to Vacation retrospectives are available to stream on the site. If you're interested in revisiting Jersey Shore's craziest hookups, big blowups, or "Snooki-est moments," then turning to MTV for these episodes is your best bet. God knows that network websites never get as much streaming traffic as they used to back in the day, so why not help out MTV's Jersey Shore money pit directly?

UPDATE: The episodes are available on MTV.com

Sadly, Jersey Shore Family Vacation isn't free for Prime users yet, but at least it's still available to stream. Amazon Prime users can buy the entire season in HD for $20, while each high-definition episode is available for $2.99. I have my fingers crossed that Amazon has put its onscreen episode facts to use with Family Vacation and has inserted stats about the cast's history at the shore. "This is the first time Snooki has eaten pickles since Jersey Shore finished" - wouldn't that kind of insight be great?

So, although you'll probably have luck with finding the show on any On Demand hubs your TV has, it looks like you have to shell out some cash to stream Jersey Shore Family Vacation at the moment. But it's totally worth it, right?

More like this
10 Unanswered 'Gossip Girl' Questions The Reboot Def Needs To Explain
By Rachel Varina
'Sex And The City' Reboot: Cast, Premiere Date, Trailer, & More News
By Dylan Kickham
In 'Riverdale' Season 5, Toni Topaz Is The Black Superwoman Without A Cape
By Erika Hardison
Stay up to date