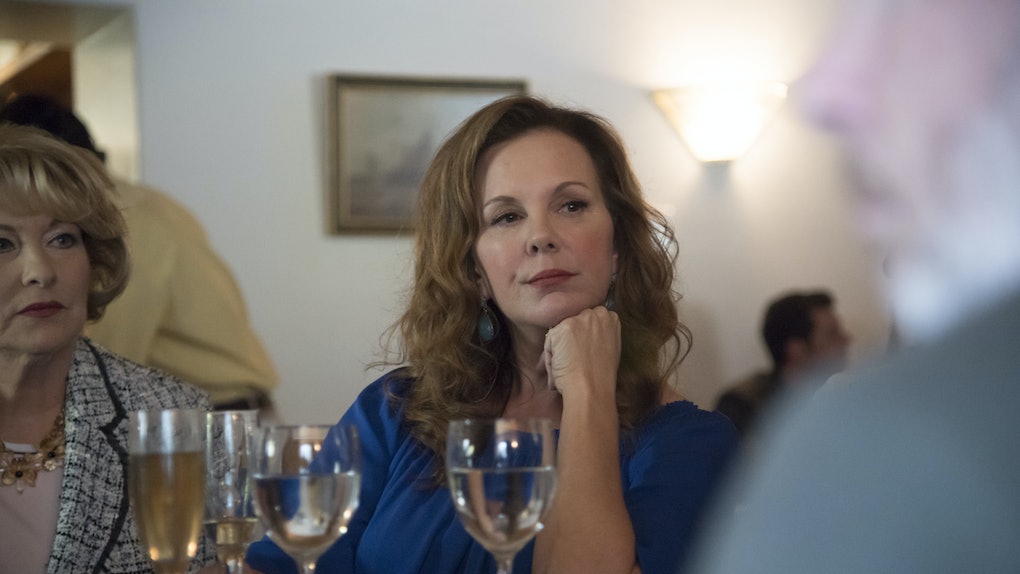 Is Jackie A Suspect On 'Sharp Objects'? Her Behavior Is Eerily Mysterious

Since Camille got to Wind Gap to investigate the murders of two teenage girls in Sharp Objects, there have been some assumptions about who committed the crimes. One: It's a person who lives in Wind Gap. Two: It's someone the girls knew well. Three: It's a man. That last one is due to the murderer's calling card, which is pulling out the victims' teeth. But what if by assuming it's a man, the cops are missing the murderer right under their noses? For instance, should Jackie be a suspect on Sharp Objects? Warning: Spoilers For Sharp Objects follow. This post only discusses the happenings in the TV series so far.

Jackie, played by the fantastic Elizabeth Perkins, is one of the first people to greet Camille when she arrives back in Wind Gap and one of the few who seems genuinely pleased to see her. But she's not Camille's age, she's a peer of Adora, Camille's mother, and she seems to consider herself an adopted aunt of sorts, even though, so far, none of Camille's memories from her childhood include Jackie.

At first, Jackie mostly seems to be a town gossip, a pot-stirrer who lives for the juiciest gossip and dropping it in just the right ear. But as the story has gone on, Jackie's talent for showing up at just the right moment to rescue Camille suggests she knows a lot more than she's letting on.

The first time viewers saw Jackie pull a rescue walk up for Camille was at the Keene funeral, but it wasn't a difficult one. The Keene house isn't exactly big, and the women confronting Camille weren't exactly quiet about descending on the classmate who got out of this town while they didn't. Jackie's timely rescue was merely a kindness.

But then this week's rerun of Jackie to the rescue seemed almost too good to be true. Camille finds herself confronted by Kirk Lacey, the drama teacher Amma was flirting with last week. Her flashback to Wind Gap's "End Zone," and the prying eyes of her former high school peers suggests this might have been the high school boy who didn't take no for an answer and told the town about it.

But then, just as Camille finds herself stuck in the conversation, up walks Jackie, once again protecting Camille when she needs it most.

What does Jackie know about Camille? Why doesn't Camille have any memories attached to Jackie? As far as fans know, Jackie has been there since Adora was a teenager, watching the twisted little family grow, but from a safe distance. She notes, like the rest of the town, she is invited to the Crellin house on Calhoun Day, but never allowed inside.

Camille admitted this week she doesn't know who her father is. But Jackie might. Interesting when she saw Camille head for Detective Willis, her first words were: "The Crellin girls sure do like their boys with badges."

Viewers saw how much Adora liked hanging out with Vickery last week. Is Jackie implying it might have once been something more? If so, it makes the conversation with Mrs. Vickery take on a different tone, no?