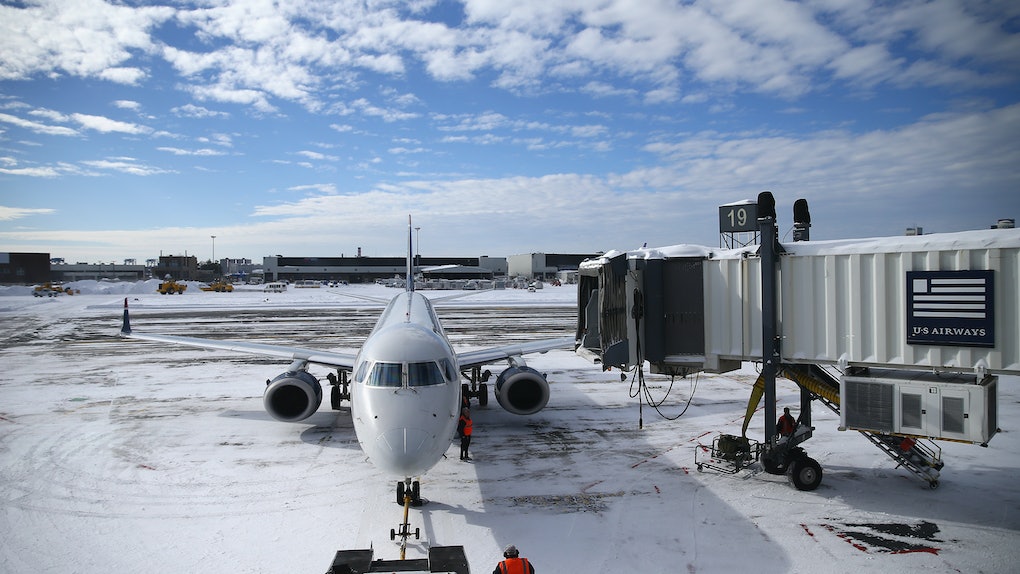 Is It Too Cold To Fly? Here's How Planes Are Affected By Freezing Cold Weather

Despite the fact that we're technically only about a week into winter, some parts of the country are definitely feeling the chill already. Those of us living in the northern part of the United States know that the air has been, um, a bit nippy over the last week or so. While this gives everyone an easy excuse to stay in and cozy up with some hot cocoa and Netflix, it also presents problems for people who haven't yet wrapped up their holiday travel. If you're leaving a cold city in search of warmer weather to ring in the New Year, you may be asking yourself, is it too cold to fly? Unfortunately, it can be... kind of.

The problem isn't exactly that it's too cold to fly. After all, planes typically fly at 35,000 feet, where the air can be below -60 degrees Farenheit. The cold never bothered planes anyway, at least not once they're up in the air. But when they're on the ground and preparing for takeoff, extra chilly temps can have a big impact on the engines, aircraft parts, and the runway.

The most common problem for airplanes in cold weather is deicing the plane and the runway. This problem appears in virtually all sub-zero temperatures, but deicing is necessary in order for a plane to be able to take off. Thankfully, maintenance crews are well-equipped for deicing, but certain temperatures can make the process slower. According to PrivateFly, in extreme temperatures, maintenance crews work 20 minutes at a time before heading back inside for health and safety reasons.

Less common problems include issues with frozen aircraft parts and difficulty starting a plane. Again, maintenance crews are well-equipped to handle these issues and can work to fix frozen brake pads or warm up a plane's engines. It's just a matter of time and efficiency. In 2014, passengers at an airport in Igarka, Russia were asked to help push a plane onto the runway, due to the plane's frozen brake pads. Don't panic; this was an extreme case, where the ground temperature was less than -60 degrees Farenheit. You likely won't spend your last hours of 2017 on the tarmac.

However, some passengers are currently facing delays and cancellations due to the cold weather. On Thursday, Dec. 28, ABC News 7 in Chicago — where temperatures are well below freezing — reported that over 80 flights were canceled out of Midway Airport. Although the skies have been clear for a few days, some airlines are taking precautionary measures, including Southwest, which proactively canceled dozens of flights based on the temperatures alone. Even passengers whose flights haven't been canceled are still feeling the cold's wrath: Midway had 107 delayed flights by 3 p.m., and O'Hare delayed more than 300.

If you're planning on traveling by plane over the next few days in a region that is facing colder temperatures, be prepared for potential hiccups. Check your flight's status before you depart for the airport in case you face any major delays; nobody wants to be stuck in the airport if they don't need to be. If your flight is delayed or cancelled, there's good news and bad news when it comes to figuring out your next move.

The bad news is that weather cancellations or delays do not make you eligible for any sort of special compensation. Because weather is considered an "Act of God" and out of the airline's hands, most do not offer more than a refund or the next available seat to your destination. The good news is that some airlines will kindly offer flexible ticket changes, full ticket changes, a ticket change without penalties, and full and/or partial refunds. It's definitely a good idea to look into your airline's specific policies before you head out.