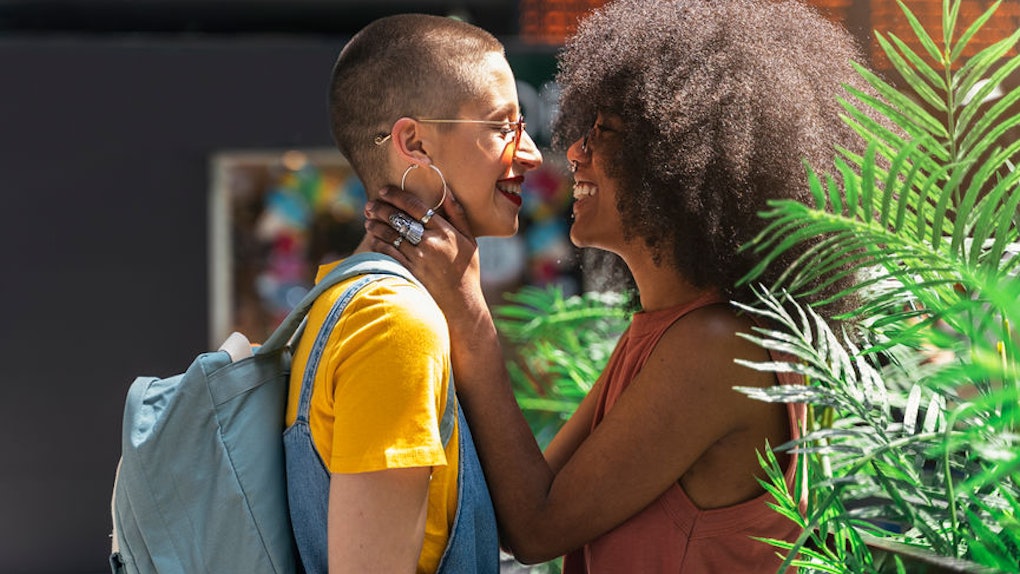 Is It OK To Not Know If Your Partner Is "The One"? 10 People Explain Why It's Totally Normal

There are about a million and one love stories that begin with two people who "just knew" that the other was the one right from the get-go. But... is it OK to not know if your partner is "The One"? I mean, let's be real. Most of us have a hard time picking what we're going to have for lunch on any given Tuesday, are we really expected to just know with every fiber of our being who we want to spend the rest of our lives with the moment we lay eyes on them?

Well, in a recent Reddit thread, a young woman asked fellow Redditors a great question: Is it OK to not know if her boyfriend is "the one"? And, oh man, did people deliver with some fantastic words of wisdom. She even updated the post after reading the responses to explain how deeply their words impacted her: "I’ve been so focused on 'dating to marry' which is still my goal but you guys have helped me realize that focusing so much on figuring out whether someone is 'the one' just leads to frustration and a lot of times I focus too much on doubt rather than his presence and the relationship," she wrote.

"Your comments have really warmed my heart and put me in such a cheery mood," she continued. "Wishing you all the absolute best with your significant others."

OK, so are you ready to come to her same life-altering realization and to have your heart feel all warm? Great! Because I have their best pieces of advice here for you. Read along and prepare to feel fantastic.

Love Is A Process

Yeah, they're full of sh*t.

I love my wife. The thought of being without her now makes me feel like I'm standing on the edge of a cliff with the wind pushing hard at my back. If something happened to her I'd have to learn how to breathe all over again. She's in me so deep I'm not sure how my heart would even beat without her. She makes me so happy I don't have words for it.

I remember the first time I saw her. I remembered her name, but that was about it. She introduced herself to a roomful of people, we didn't talk until days later. We became friends not long after that.

Within months I really liked her, but it was much longer before it became love, really actually love, and much longer still before I was sure that I'd love her forever.

It's completely okay not to know that they're "the one". COMPLETELY.

The thing people feel at first sight is, at most, lust, or infatuation.

It can lead to love. Love can start there. But it can just as easily end up at incompatibility or toxicity.

A functional relationship doesn't just happen. You have to communicate, you have to learn to understand each other, know the things the other person needs to feel loved and cared for, know that they care just as much about you feeling loved and cared for. You need to learn how to resolve it when you disagree.

Even If You Know Day One, You Might Be Unsure On Day 500

I knew on Day One. Not so much on Day Three Hundred. Definitely knew on Day Five Hundred and Thirty-Three, but reaallllllyyyyy doubted it three days after that. Okay, I'm making these numbers up obviously, but my point is, even if you know on day one, it's not like there's never doubts. Or moments where you're like "can I really live with a man who leaves his towels on the floor for the rest of my life?" (spoiler alert: with his/hers bathrooms, YOU CAN!) Some people click in a really intense way on day one. My fiance and I did. But nobody's path is so linear and simple that you just spend every day since day one in a kind of perfect bliss. Other people - like you! - might be more of a slow burn together. That's no less a recipe for success. If anything, it's probably healthier and more realistic. For you, it sounds like you know that you're young and have a lot of change ahead of you, so you don't know what role that's going to play. That's fine, and does not in any way mean the two of you are doomed. Your mature perspective is more likely to have a positive benefit on whatever direction the two of you go than some kind of deep, cosmic "knowing."

All You've Really Got Is Your Best Guess

Engaged here (not sure if I count). There's no guarantees in "love." People change, feelings change, relationships change... it's impossible to know that the person you're with is who you'll stay with forever. The best you can do is find someone that feels right and work hard at improving yourselves together, hoping it sticks. Good luck to ya.

There's Really No Such Thing As "The One"

"The one" is such a problematic idea. I don't think there's just one person out there for everyone. That would be sad--what if your first spouse dies, is another spouse just going to be less loved? Less of a good fit for you?It also makes it seem like long term relationships are easy. Even the healthiest relationship takes work. Everyone's got their shit. Every person has something that will make you doubt them. It's work sorting out the green, yellow and red flags. It's work figuring out which problems can be managed and which ones are dealbreakers. It's work deciding whether a relationship is worth the effort. It's work just maintaining your relationship's balance day to day! In my experience, people who say stuff like that are either being disingenuous about how their relationship works because they like to present a romantic picture to the world, or they are ignoring things they shouldn't be. When I was in my early 20s I didn't know sh*t. I think that's totally normal. You might be with this person until you're 80, you might not. You don't even know who you're gonna be in 5 years, let alone 50. I wouldn't worry about it.

No, Seriously. It's Really Not A Thing!

I had "love (strong attraction) at first sight" once. That day was etched into my memory, classic "saw him from across the room" and was like daaaaamn who is that and for some reason just couldn't tear my eyes away. Something about him just from pure appearance just hit all my buttons. Instant crush from day one, we became friends and then finally dated (which felt like a dream come true obviously, WOW was I head over heels). But, ya know, turns out we weren't a good match and had pretty strong incompatabilities in some pretty fundamental areas. Lasted less than a year and then it was done. The "one" is a myth. There's way too many people on this planet, it would be depressing as hell if "the one" was actually a thing, because the vast majority of people would never, ever meet their "true partner." The truth is, there's some people that are better for you, and some that are worse for you. The odds are very good that there's more than one who could become the love of your life, that you could live happily ever after with.

Just Take A Breather And Enjoy What You Have

There is no 'one'. Relationships don't work like that, and anyone who says they do is either a hopeless romantic or trying to impress someone. Relax. Enjoy what you have. Don't create problems that don't exist.

So, I've heard this one bit of advice and I think it's really potent. Love isn't a noun. It's a verb. Love isn't a thing that just exists and you have to find it, it's a thing that you and your partner are actively doing. You don't get fit by just hoping you'll exercise. You get fit by actively doing exercise. Likewise, you aren't gonna just find "the one". You have to actively make "the one".

It's OK To See Someone Just Potentially Becoming "The One"

On my first date with my now husband, I knew he COULD be the one. Our relationship was certainly of the slow burn variety, we had a couple serious talks about whether we wanted to continue or not. These talks really let us explore what we wanted in life and from each other. They were super uncomfortable and we came close to splitting a couple times. Not because we were fighting or anything, but because we still weren’t sure if the other was the One. But fortunately we didn’t listen to the societal pressure about how true love is this Big Thing like in the movies. We just kept dating, supporting each other through family issues and new jobs, traveling together, and just enjoying each other. Eventually we moved in together and got married, and we’re very happy. We did it at our own pace and just did what made sense for us.

Real Love Requires Getting To Know Someone Deeply

The people who say that have a sad, shallow idea of what knowing a person means. Apparently they knew someone well enough to be sure they wanted to die by their side after just an introduction?!

Some People Will Never "Just Know"

I realized long ago that I just wasn't the type of person who would "just know" or have any of the other instant, dramatic rushes of emotional clarity some people talk about. Life is complicated and I'm a bit of an overthinker. I did 99% know that I wanted to marry my husband when we finished our talks about marriage and he officially asked me. So that was after we talked about serious stuff like kids, jobs, houses, religion, illness, disagreements, etc. Then there was always 1% doubt like "what if he is secretly a lizard person" or "what if this is all a dream" because I'm just never a 100% sure person. I was like 5% on the day we met because I just don't trust people that much. I was also in a relationship before where I ignored like 500 red flags. I was dumb but I would just chalk it up to "nobody is perfect and nobody is ever 100% sure" but eventually I realized I was actively avoiding ever talking about marriage or kids with this person because I WAS sure they were the WRONG choice. I just didn't have the guts to end it. So I think it can go both ways. And either way covering up logical facts like "He just spent $600 at a bar 2 weekends in a row" with blind emotion like "but I love him" is dumb. Edit: I'm also not saying people who are young don't know what they want, but it can be hard to be completely sure of big life decisions when you're younger. For me, my values changed when I got older and it helped me know what I wanted long term. It's okay to not know and to want to wait until you do know.

See? I told you this would leave you feeling fantastic.