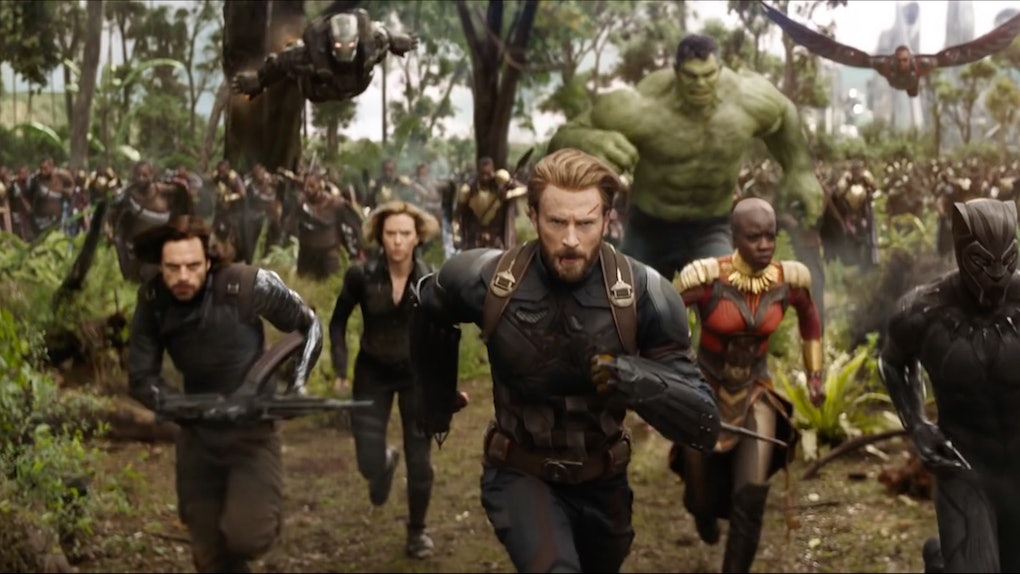 Is Hawkeye In 'Avengers: Infinity War'? He Doesn't Make An Appearance In The Trailer

The first Avengers: Infinity War trailer is here and it's got every superhero from the Marvel Cinematic Universe all coming together... well, almost all of them. The first look at Infinity War assembles most of the Avengers — Iron Man, Captain America, Thor, the Guardians of the Galaxy, Black Widow, Scarlet Witch, Vision, Hulk, Doctor Strange, Black Panther — but there is one glaring omission. Where is Hawkeye in the Avengers: Infinity War trailer!? Seriously, Clint Barton is a founding member of the Avengers and one of the staples of the franchise, but he 's nowhere to be found in the new trailer. Now some fans are even concerned that Hawkeye may not even be in Infinity War at all. So what's going on here with the Hawkeye-less trailer? Let's get into it.

On Wednesday morning, Nov. 29, Marvel dropped the very first look at next year's Avengers: Infinity War, featuring all the major heroes in its ever-expanding cinematic franchise meeting up to take on an intergalactic warlord named Thanos. The new clip had a ton of exciting moments in it, such as Iron Man meeting Doctor Strange, Black Panther reintroducing Captain America to the team, and Thor meeting the Guardians of the Galaxy, but one thing that stood out to Marvel fans everywhere was who wasn't in the trailer. No Ant-Man, no Nick Fury, still no Captain Marvel, but most glaringly, no Hawkeye!

Check out some of the fan response to the lack of Hawkeye in the new Infinity War trailer below, and then we can get into it:

With no sight of Hawkeye in the new trailer, some fans aren't sure that the master archer will even show up in the new movie. Well, rest assured, because Avengers: Infinity War will definitely have some Hawkeye in it, although from the looks of this trailer, he probably won't be a major part of it. Jeremy Renner has been doing press for Infinity War, and the movie is listed on his IMDb page. Not to mention he just appeared in his Hawkeye get-up along with the rest of the Avengers cast on the cover of Vanity Fair to promote the upcoming movie. So like, yeah — Hawkeye is definitely part of Infinity War.

But since he's not in the trailer at all, we can probably assume that Hawkeye will only be a small part of the new movie. If the trailer is any indiction, the major players will be Captain America, who has returned from saving the Winter Soldier in Captain America: Civil War, Iron Man, who we see forming an alliance with Bruce Banner and Doctor Strange, and Black Panther, who we see bringing all the rest of the heroes to Wakanda with him. And of course, anyone with an Infinity Stone in their possession is also going to be a big part of the new movie, seeing as Thanos is dead-set on collecting all six of them. That includes Loki's Space Stone, Vision's Mind Stone, and Doctor Strange's Time Stone.

With all the focus on the millions of other heroes, it sounds like there's not going to be a lot of space for Hawkeye in the new flick. Just as a reminder, we last saw Clint Barton in Captain America: Civil War, when he took Captain America's renegade side in the faction that split off from Iron Man's side. Hawkeye spent the last portion of the movie held in captivity at the super prison known as the Raft, alongside Cap's other teammates Ant-Man, Falcon, and Scarlet Witch. But at the very end of the movie, Captain America returns to bust them out.

Avengers: Infinity War will hit theaters in May of 2018.