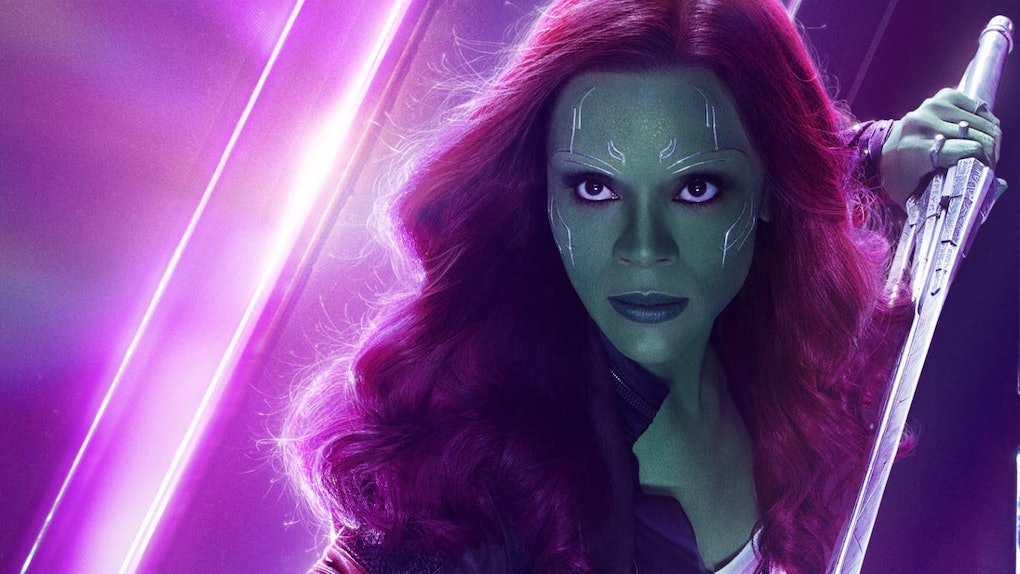 Is Gamora Really Dead? This 'Avengers 4' Theory Has Fans Convinced She'll Be Back

Avengers: Infinity War ended with a decimation of the enormous cast, promising a reset to begin the follow-up movie, The Still Untitled Avengers 4 Film, which comes out a year from now. But with the loss of so many heroes, and a huge undertaking in defeating Thanos still to come, Marvel buffs have been digging through the rubble to find any clues which might help solve the problem. One theory rests in Thanos' vision at the end of the film, and called into question something fans had assumed really happened. Is Gamora really dead? Or is her spirit somewhere still in the space between universes? (Go ahead and assume this post will contain spoilers from Avengers: Infinity War from here on out.)

At the end of Infinity War, the casts from nearly every stand-alone Marvel film have lost at least one member. But the film series which lost the most cast members was Guardians of the Galaxy. With the exceptions of Rocket Raccoon on Earth and Nebula on Titan, the entire cast was done and dusted by the time the credits rolled, except Gamora. Her death had come earlier, a sacrifice traded for the Soul Stone. Unlike her compatriots, who viewers assume will their deaths undone, Gamora's looked pretty final.

But Gamora's broken body lying at the bottom of a cliff on Vormir isn't the last time she's seen on screen. When Thanos snaps his fingers, for a moment he leaves his body and the reality on Earth and finds himself someplace unknown, a place that could easily be the same way-station where Dumbledore and Harry Potter once walked in The Deathly Hallows, just with an orange makeover.

This is the Soul World, the place where the those sacrificed to the Soul Stone reside. There, he sees a vision of Gamora, as a child, as she was when he first saw her.

Thanos then comes back to himself and transports away.

So this means Gamora isn't really dead. Her soul is trapped into the Soul World, a pocket dimension inside the Soul Stone. it also made her immune to the results of Thanos' finger snap. By sacrificing her to receive the stone, he also accidentally made sure she would survive any effects from it.

So Gamora is alive, albeit in child form, and trapped inside one of the stones in Thanos' now mangled glove. It may sound funny, but this actually makes reaching her far easier than trying to resurrect those who have blown to bits. If the remaining Avengers (lead by Nebula) manage to get inside the Soul Stone and pull Gamora back out, giving the crew something Thanos wants more than anything, the daughter he sacrificed for absolute power, and she's on their side.

How exactly she winds up defeating Thanos is still up in the air. In the comics, Nebula goes mad and attempts to steal the Infinity Gauntlet. Thanos winds up having to team up with the remaining Avengers to stop her. It's doubtful this is going to happen here though.

The more likely answer is Gamora's return will upset the balance of the universe Thanos was striving so hard to achieve. It may even help Captain Marvel to rip time and space enough to undo Thanos' genocidal act. Either way, the chances of getting to see Captain Marvel, Black Widow, Oyoke, Nebula, and Gamora all team up together is worth waiting for.

The Still Untitled Avengers 4 Film arrives one year from now, on May 3, 2019, in theaters everywhere.

More like this
This Video Of Disneyland's Marvel's Avengers Campus Is Super
By Cianna Garrison
10 Quotes From Netflix's 'Enola Holmes' That Are So Freaking Relevant
By Rachel Varina
What's Leaving Netflix In May 2021? Say Goodbye To Some Faves
By Ani Bundel
Stay up to date