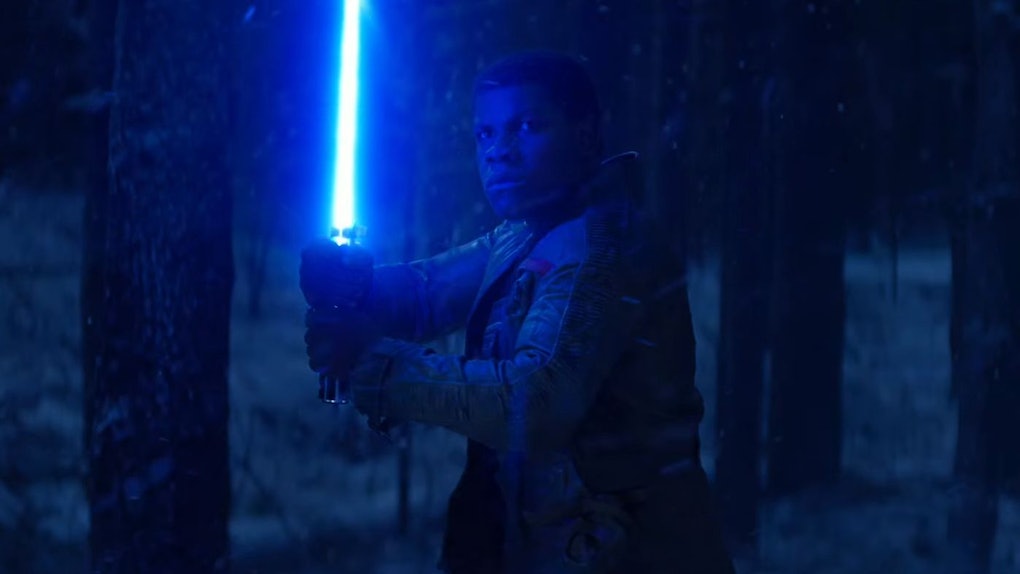 Is Finn A Jedi? The 'Star Wars' Character Has Fans Asking Questions

Star Wars: The Force Awakens, like any good opener for a trilogy, left fans with as many questions as it did answers. We learned what happened to Han and Leia, we met their son Ben. We found Luke Skywalker, and we have an idea of what made him self-exile. But we still don't know what happened exactly that turned Ben Solo into Kylo Ren. We don't know who Rey's parents are, or if she will follow the path of the Jedi. We also have questions about Finn. Is Finn a Jedi? It certainly seemed like he might be at least Force-sensitive when he picked up that lightsaber and faced down Kylo Ren.

Perhaps a better question is: "Will Finn become a Jedi?" Being a Force-sensitive person does not automatically confer Jedihood upon a person. Anakin wasn't a Jedi when he pod-raced around the track. He had to be trained. Same with Luke. His leaving Master Yoda before his training was complete meant that he was always a Jedi with an asterisk next to it. Leia never trained in the movies (though she did in the now-defunct expanded universe novels.) Technically, she's not a Jedi either. There's only one Jedi right now in the Star Wars universe, and he's "The Last Jedi" until further notice: Luke Skywalker.

John Boyega also pointed out to Digital Spy that being a hero in this universe doesn't require Jedi training.

There are loads more stronger characters in the Star Wars universe that can go up against Jedi and they don't necessarily have to be a Jedi. I think it would be more interesting if they had more than one person be a Jedi – but I think that that is the one of the unspoken laws of Star Wars. They only have one who has to go away and train.

We know that Rey is going to find Luke in order to deal with all these Force sensitive feelings she's having. She wants answers, and more importantly, she wants training. She wants to be a Jedi.

Luke, as we've seen from the trailers, will at first refuse her. Though where that leads, we don't know. Perhaps Luke will acquiesce to train Rey, before renegging and wigging out and going all unreliable Luke on her. But would he be interested in training any one beyond her?

On the whole, it's doubtful. But I don't think the universe cares two figs what Luke wants. There are quite a surprising number of force-sensitive individuals in our cast. Poe Dameron, for instance, according to the backstory the comics have given him, was raised with Force trees in his backyard, and his exposure to them is why he's such an amazing pilot.

Finn also has shown quite a few signs of Force sensitivity. His instant bonding with other Force-sensitive individuals, including Poe, Rey and Han Solo, gives us a sign. There's also his instinct to stand up to Kylo Ren. And of course, his abilities with a light saber.

So, will we see Finn get trained along with Rey? Or perhaps instead of Rey, if she abandoned Luke and goes to train with Kylo Ren and the Dark Side? Could we see Luke decide to train someone who is not Rey?

Or perhaps, Finn and Poe are meant to be the generation that will pick up the pieces. If Rey does come out of the other side in the final movie and rejoins the light (and maybe bring Kylo Ren with her), they will be looking for another generation of warriors to train. Perhaps they will look to train them as Jedis, or perhaps they will train them as something new altogether, leaving the past behind and creating warriors that embrace both the Dark and the Light.

But whatever happens, we have a feeling that so many Force-sensitive characters running around isn't a coincidence. Finn (and his buddy Poe) still have large roles to play in the saga. We have a feeling we haven't seen the last time Finn will draw out a light saber and stand and fight.

More like this
10 Quotes From Netflix's 'Enola Holmes' That Are So Freaking Relevant
By Rachel Varina
17 Tweets About Simu Liu In The 'Shang-Chi' Teaser, From Proud 'Kim's Convenience' Fans
By Dylan Kickham
Kristen Wiig Is Making A Musical About Cinderella's Evil Stepsisters For Disney
By Dylan Kickham
Stay up to date