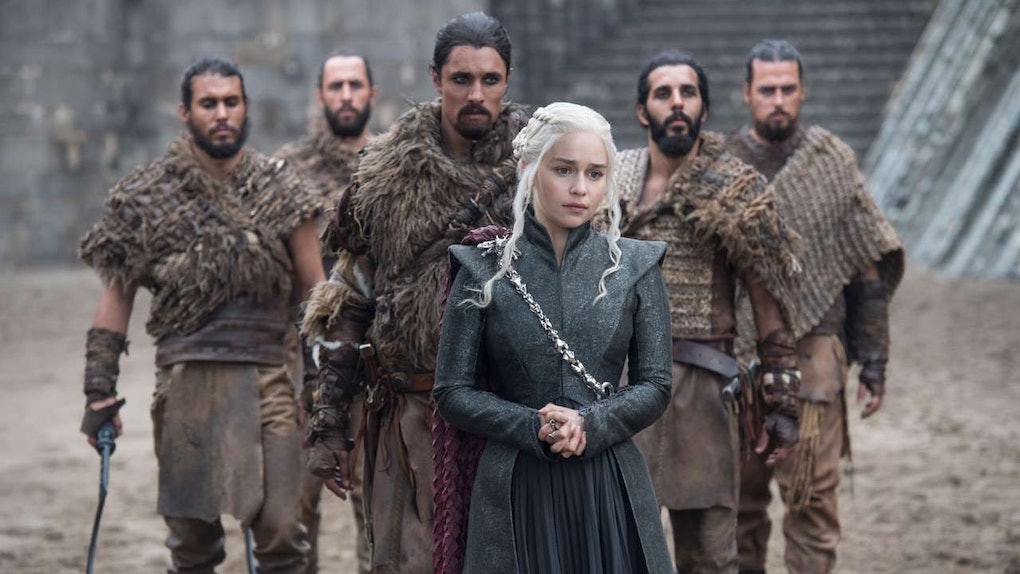 Is Dothraki A Real Language? 'Game Of Thrones' Fans Can Learn To Speak It Themselves

Game of Thrones prides itself on creating a world so realistic that viewers wish they could book their own trip to the Seven Kingdoms. Between its intricate locations and immersive languages, the fantasy drama has particularly fueled dreams of the Iron Throne in the lead-up to the series' final season, premiering April 14. If you're on the lookout for Game of Thrones-themed activities to enjoy before the series finale, get your pen and paper ready. While you probably won't find a Daenerys doppelganger speaking it IRL, Dothraki is a real language, and you can learn it alongside your marathon viewing of past seasons.

Known as the special tongue of the Dothraki, the unique language appears throughout the series in exchanges between the nomadic warriors. Die-hard fans will have picked up on common Dothraki titles such as "Khal" and "Khaleesi," and if they've listened closely, maybe they can even translate a word or two of the language on their own. It's easy to believe that Game of Thrones author George R.R. Martin penned the entire language, but seeing as he was attempting to finish the book series during the series' filming, the creative team hired someone else to craft the language.

While planning the series, producers D.B Weiss and David Benioff wanted to flesh out Martin's original use of Dothraki for TV. In 2009, they partnered with the Language Creation Society to hold a contest in which the winner would develop this language. David J. Peterson won, and since then, he's produced every Dothraki phrase that hits the screen on Game of Thrones, basing his decisions upon the books' details and Weiss and Benioff's guidance. How's that for a resume builder?

Peterson has crafted such an extensive database of Dothraki that much of its vocabulary and grammar has never even been used in the show. If hardcore Thronies want a way to celebrate the return of Game of Thrones, they can dive into this uncharted territory by ordering Peterson's Living Language guide of how to speak Dothraki. Originally published in 2014, Living Language: Dothraki offers insight on its grammar, vocabulary, and culture.

For $20, fans can purchase a book and CD package that includes 250 vocabulary words, written exercise questions, and a Dothraki dialogue. The guide's CD focuses on pronunciation, Dothraki phrases, and grammar breakdowns. A Dothraki language app and a year-long subscription to an online course are also available. Basically, if you never caught on to Spanish or French in high school, Living Language has plenty of resources to help you master this popular tongue.

In addition to bringing the Dothraki language to life, Peterson also developed the series' Valyrian language. It's safe to say that Game of Thrones fans know just how devoted the cast and crew is to making authentic work, and Peterson's devotion to the characters' use of words is a key example.

"[Weiss and Benioff] are huge fans of the books, and from the beginning it’s been their goal to ensure that the whole thing comes off perfectly," he said in a 2010 interview. "They felt that a full language was necessary to bring the Dothraki to life on screen. In general, I think that Hollywood is taking notice of the fact that, more than ever, fans crave authenticity."

Here's to seeing more instances of this realism and the Dothraki culture in Game of Thrones' final episodes. Season 8 of Game of Thrones premieres on Sunday, April 14 on HBO.