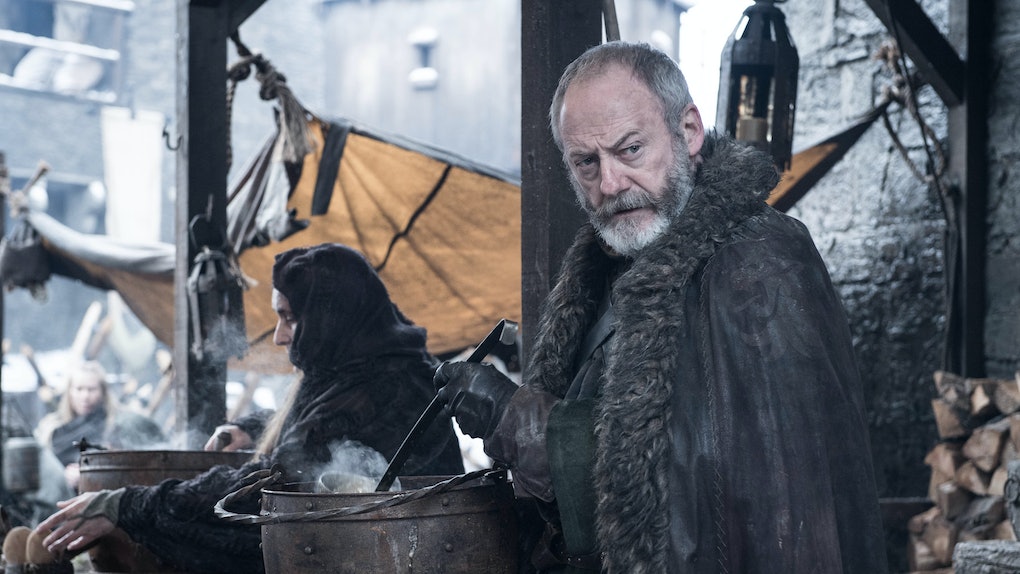 Is Davos Going To Die In 'Game Of Thrones' Season 8 Episode 3? Here's Why Fans Are Worried

The modern fantasy genre came out of a group of writers in the post-War landscape, many of them using these stories to help process their experiences in WWI or WWII. As part of that process, the novels often contain great battles, like Helm's Deep in Lord of the Rings. As heir to that tradition, Game of Thrones is also full of epic fantasy wars, the biggest battle of which the show will stage in Episode 3 of Season 8, killing many beloved characters, like Davos Seaworth. Is Davos going to die in Game Of Thrones? Fans are anxious.

Unlike most of the cast in Westeros, Davos exists in a funny in-between status. He's not high born like the Starks or Jon Snow. However, he's not part of the lower classes anymore, like Gendry. He was pulled up by Stannis, taught to read by Shireen, and learned how to be a valuable emissary while he was about it.

Most men of his upbringing who wind up in a position like this do their class jumping via the military, like Grey Worm. However, Davos isn't a soldier. He was just a smart man who was lucky to be recognized for his intelligence by someone who didn't care for class markers and took advantage of his luck.

It's that lack of military training that has fans worried though. That and few comments Davos actor Liam Cunningham made as part of the run-up to Season 8.

On RTE One's The Late Late Show, hosted by Ryan Tubridy, Cunningham responded to a "Congratulations" on his survival with a "...so far."

The audience immediately ooohed at the idea that this could be a spoiler. Cunningham rushed in to interject that he doesn't mean anything by that. He's not saying his character dies, he not saying he lives. However, considering the nature of the show, everyone should get a "...so far" when talking about their ongoing survival on the show. And yet, he does note that fans should never forget the phrase "Valar Morghulis."

Davos certainly has less plot armor around him heading into this battle than, say, Jon Snow or Daenerys. In a series that's planning to take out quite a few beloved characters before the credits roll, his would be an easy one to slot into the Battle of Winterfell. Considering the scene in the Great Hall last week, where Davos, Tormund, Pod, Jaime, Tyrion, and Brienne sat around and talked, it would make sense if Davos were on the "non-surviving" half of that group.

Moreover, I am a whole lot less convinced Davos will go than, say, Tormund or Pod. One of the reasons Davos is still here is because he's a survivor. He does not fight when he knows he will be a liability. Considering his decades as a smuggler should have taken him out if not his experiences with Stannis, his ability to keep on living is one of his core traits.

Still, Game of Thrones knows the most substantial choices come from subverting all viewer's expectations. If Davos seems likely to survive, that's a death sentence for sure.