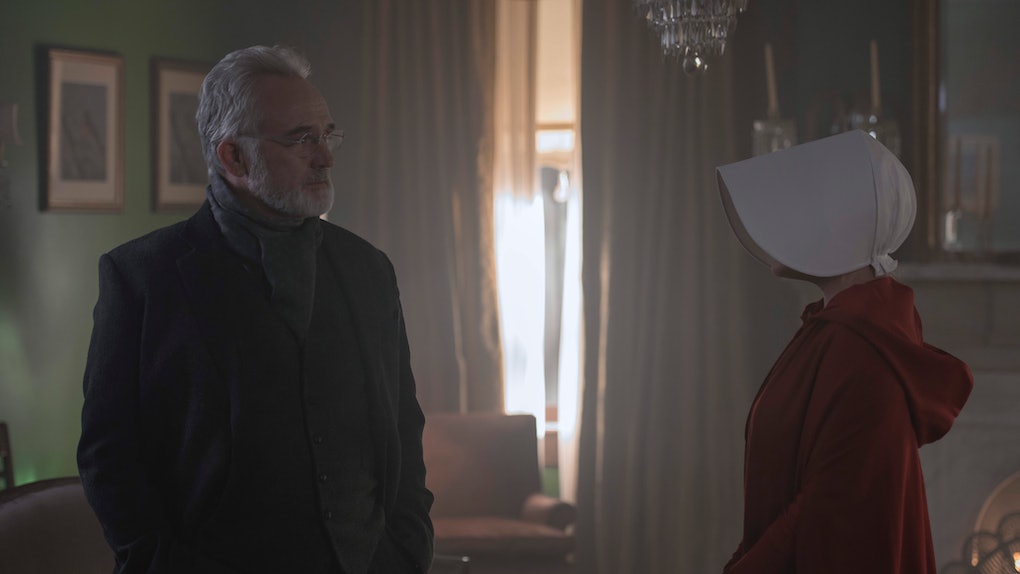 Is Commander Joseph Lawrence Good Or Evil? 'The Handmaid's Tale' Fans Have Questions

The Handmaid's Tale started off as a story set in the Waterford household. The lead cast of characters included Commander Fred Waterford, his wife Serena Joy, their chauffeur Nick, their Martha Rita, and their handmaid, known as "Offred," after the man she served. Offred's real name is June, and it's her adventures viewers have followed over two seasons. But recently, a new Commander, arrived on the scene, Commander Joseph Lawrence, the supposed architect of Gilead's economy. But is Commander Joseph Lawrence good or evil? Warning: Spoilers for The Handmaid's Tale Season 3 follow.

By the end of the first episode of the new season, the Waterford household has fallen to pieces. The loss of Nichole and the sense of the walls closing in around Serena Joy drove her over the edge. In a helpless rage, she set fire to the marital bed where she slept with her husband, and where they impregnated June. The house fire took the building down with it.

Though everyone survived, it was now a household divided. Serena Joy was sent to live with her mother. Waterford was demoted. Nick was promoted and given orders to leave the city and head to Chicago, where rebel Americans had taken the city. And June was Offred no more. After a short stay in the Red Center, she was reassigned, to Joseph Lawrence's house, where she would now be known as "Ofjoseph."

As fans will recall in Season 2, this is the same house Emily was assigned to before, and there are definitely perks that come along with it. Lawrence's wife, for instance, hates Gilead, and clearly would tear the system apart brick by brick if the world would let her. That means no ceremonies, no pregnancies, and no harassment. Also, Lawrence mostly looks the other way when it comes to his Marthas, and it becomes abundantly clear the resistance network is all but openly operating out of his kitchen.

Since June came back with the idea of tearing down Gilead from the inside, or at least rescue Hannah trying, this seems, at first glance, like the ideal home base for her. Perhaps Lawrence will even pitch in and assist. After all, a handmaid needs allies.

However, it's not going to be that simple.

Lawrence is, after all, the guy who dreamed up the philosophies of Gilead in the first place. He's emotionally detached from situations. Lawrence may stop Aunt Lydia from attacking June but then wanders off musing about the amount of electricity those cattle prods deliver. He treats both the Marthas and June like a cat would a small injured predator caught in between its paws, willing to test their loyalty, and misogynistically sneer at them when they fail to impress — and sometimes even when they succeed.

But as Waterford notes to June, Lawrence is, above all, a survivor. If his family's in danger, all bets are off. He proves this when he throws one of his long-time Marthas to the Guardians to protect his wife. Lawrence may not be wholly evil, but he's not the safe harbor fans were hoping June had found. In the end, the only people she can really trust in Gilead are women.

This article was originally published on June 4, 2019

More like this
10 Questions The ‘Schitt’s Creek’ Finale Left Unanswered
By Rachel Varina
Who Is Cleo On 'Outer Banks'? Carlacia Grant Is New To Season 2
By Ani Bundel
7 'Game Of Thrones' Spinoff Ideas HBO Should Def Consider
By Ani Bundel
Stay up to date