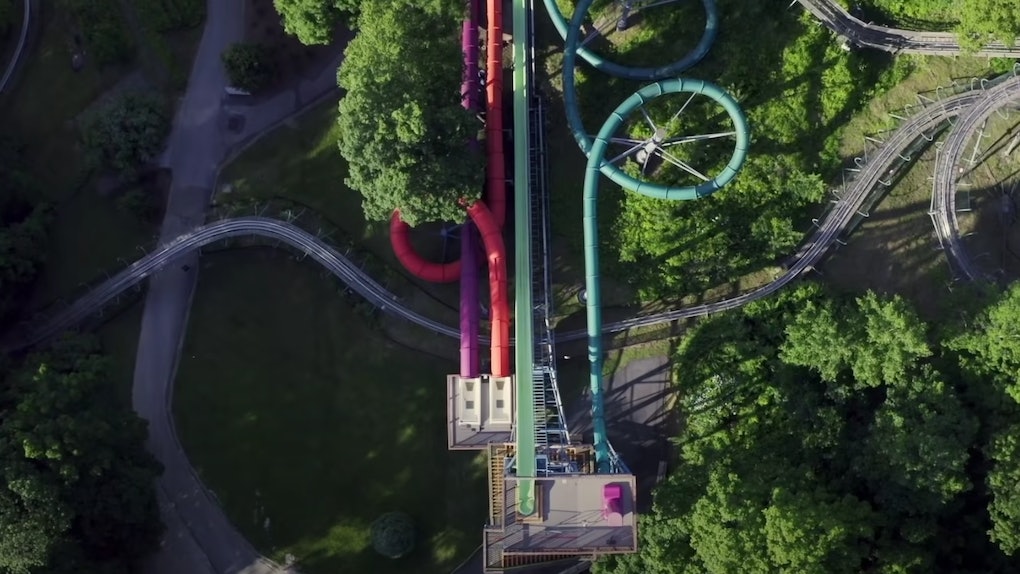 For most people, summer means sunshine and swimming pools. If you were from New Jersey in the ’80s, however, it may have meant some bruises (or worse) at the infamous Action Park, nicknamed "Class Action Park." The theme park was known to basically be a "rule-free" space, which resulted, according to numerous reports, in a heap of injuries, lawsuits, and even deaths. If you've watched HBO Max's new documentary, you're probably wondering if the subject of Class Action Park is still open, and how Mountain Creek Waterpark fits into the equation.

It's not too often you get a true crime story mixed with waterslides, but that's exactly what made the storied Action Park so alluring. Basically, the founder, Eugene “Gene” Mulvihill had a lot of money and connections in Vernon, New Jersey, where the park is (yes, "is" — I'll get to that). In 1987, he created Action Park, which quickly became notorious for allowing guests to be at the center of all the action, especially when it came to dangerous rides.

“My dad’s whole idea was to do an amusement park differently, not where you just got strapped in and twisted around, but one where you controlled what was going on," Gene's son Andy told Mental Floss in 2018. "You can have an awesome time, but you can also hurt yourself if you don’t use good judgment."

In order to get insurance for the park (because companies were understandably wary to insure a place where people seemed to get injured on the reg), Mulvihill created his own insurance company called Great American Recreation. But then came the legal issues.

In July 1980, an Action Park employee named George Larsson had an accident on a one of the rides after-hours. According to NJ.com, his ride went off track, he hit his head, fell into a coma, and died days later. And that is only one of the reported lethal incidents; according to the New York Times, there were six deaths at the park between 1978 and 1996.

After a whole bunch of lawsuits resulting from these deaths, plus a 1984 insurance fraud indictment (as reported by the Times), Great American Recreation declared bankruptcy. The park closed in 1997.

The very next year, a Canadian resort company called Intrawest purchased Action Park and renamed it Mountain Creek Waterpark. After major revamps, the dangerous rides that made the park infamous were finally removed. Thirteen years later, in 2010, Mulvihill bought back the park, opting to keep the new name.

After Mulvihill died in 2012, his son Andy took over; in 2014, the younger Mulvihill reverted the park's name back to Action Park. The rebranding was short-lived, however, because in 2016, a different family purchased the park and changed the name. Again. This time, it was changed back to Mountain Creek Waterpark, which is how it remains. For now, at least...

While the park is currently open (with capacity caps due to the coronavirus pandemic), it's not going to have the same danger as it did back in the '80s, since there are newer, much stricter safety standards in place. But hey, if there's less of a chance of finding out firsthand why they called the wave pool the "grave pool" back in the day, that's probably a pretty good thing.

More like this
These 'The Nevers' Theories About That Flying Ship Are Absolutely Bonkers
By Ani Bundel
Who Are The Touched In 'The Nevers'? Their Abilities Are Completely Wild
By Ani Bundel
This 2021 'Game Of Thrones' Season 8 Trailer Is So Confusing... & So Good
By Ani Bundel
Stay up to date