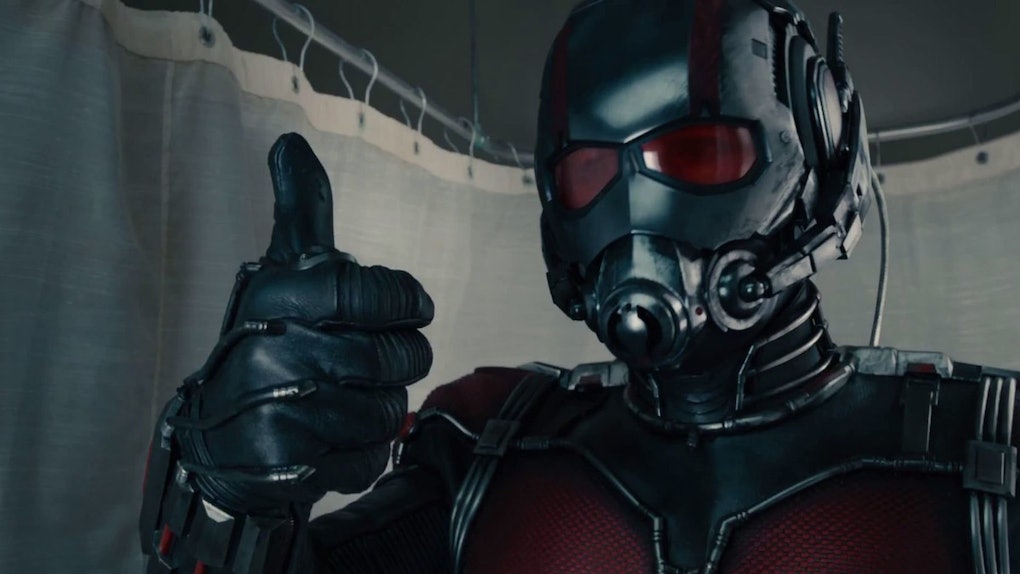 Is Ant-Man In 'Avengers: Infinity War'? He Doesn't Make An Appearance In The Trailer

The first trailer for Marvel's Phase III climax, Avengers: Infinity War has arrived. Against all odds, this terrifying exercise of just how many superheroes one can cram into a single two-hour movie without causing a gravitational collapse of the digital pixels they're printed on actually looks to be a good movie. But while some fans are hyperventilating over Cap's new facial hair and Bucky's Wakandian Butter shampoo'd 'do, others are searching the cracks for one small but important character. Fans are wondering if Ant-Man is in Avengers: Infinity War.

We haven't seen much of the smallest (and sometimes largest) superhero the Avengers have on their team since the "Superhero SquareOff Showdown" in Captain America: Civil War (affectionately also known as Avengers 2 1/2: The Smell Of Civil Liberties).

The last we saw of the tiniest Avenger, he had just been sprung from prison, along with Hawkeye, Falcon, and the Scarlet Witch. As far as we know, he's in hiding, though if that's with Hope Van Dyne or just with the others from Team Cap remains to be seen.

Both Falcon and Scarlet Witch are given clear shots in the trailer. Hawkeye is not, we only see Jeremy Renner once, from the back. But if everyone else who escaped from the island is there, why not Scott Lang?

The good news: Paul Rudd is on the roster of stars confirmed to be in this film. But that list is *long*. It includes, but is not limited to (deep breath):

Look, everyone is in this movie, okay?

The fact is, when it came to making the trailer, and making this look like a movie that we all want to run out and see when arrives on May 4 of next year, they had to cut things to tell a coherent tale.

They also want to emphasize certain characters over others. Iron Man, Thor, Hulk, Captain America, and Black Widow: They've been with us since the beginning, since before the first Avengers film brought the team together. Many suspect this two part film will also be the swan song for most them, if not all.

Then there are the "marked for central to the plot" characters for this film. Thanos is searching for the Infinity Stones. Loki owns at least one, in his staff. Vision definitely owns one, front and center in his head. Audiences have to see them, and be reminded of this fact.

Finally, there are the newbies who've just arrived, the ones who are fresh in our minds. Those are characters like Doctor Strange, who has a spectacular cameo in Thor 3, and newbies like Spider-Man, a character Marvel moved heaven, earth, and several bank accounts at Sony to bring to this tale. They're characters like Black Panther, whose movie comes out directly before this one. Those are the Avengers who will be picking up the pieces, and taking on the mantels of those who exit the franchise when this story ends.

That means characters like Ant-Man, who arrived mid-Phase I. He's neither old nor new, and he owns no stones. He's going to be shunted off to the side. Even the Guardians of the Galaxy, who are the big addition to the team after having two of their own films, but also no stones, are only granted a short cameo at the end.

So don't worry about Ant-Man. He'll be there, somewhere. He might even actually be in this trailer, just too small to see.

More like this
The 'Zola' Movie Trailer Will Have You Reliving The Iconic Twitter Story
By Dylan Kickham
This Video Of Disneyland's Marvel's Avengers Campus Is Super
By Cianna Garrison
Emma Stone's 'Cruella': Premiere Date, Trailer, Cast, Plot, & More
By Abby Monteil and Dylan Kickham
Stay up to date