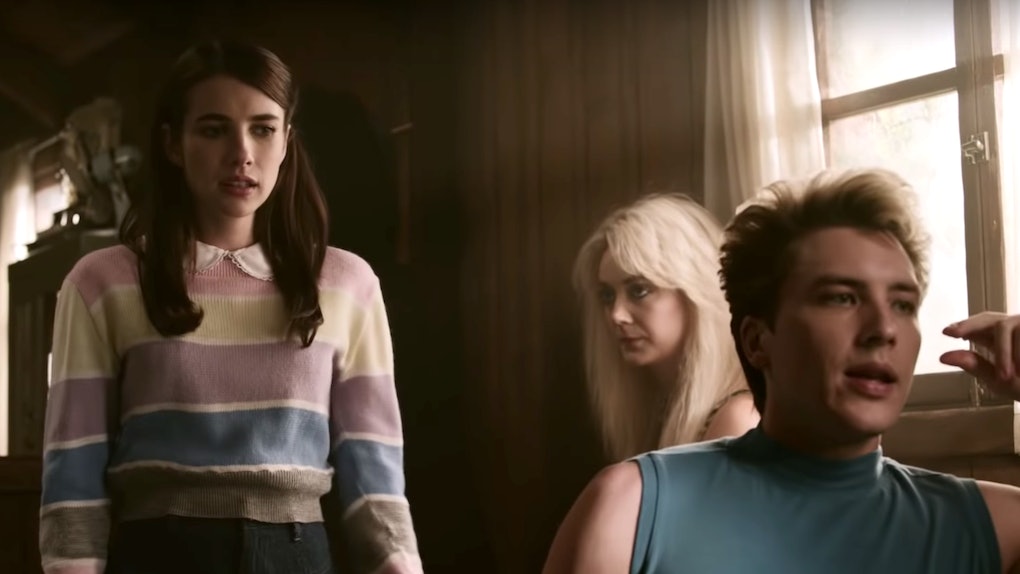 Is 'American Horror Story: 1984' Based On A True Story? Fans Are Already Scared

The new season of American Horror Story is about to descend upon fans, and per usual, most of the details about the season have been kept a mystery. Fans have gotten a cast announcement, a ton of thematic teasers, and a trailer to hint at Season 9's horror story, but nobody knows what is really in store for viewers when AHS: 1984 premieres. Some fans are even wondering if American Horror Story: 1984 is based on a true story. Although the anthology series has never truly centered on a true story before, it has included elements from real-life horror stories in past seasons. However, this time, it looks like AHS is going to go all-in on fiction rather than reality, since it is all about celebrating the campy slasher movies of the '80s.

Not much is known about the plot of American Horror Story: 1984 just yet, but the '80s slasher movie theme of the new season seems to very clearly confirm the new story will draw more from iconic fictional stories than anything that really happened. Trailers have revealed that the new season will be set at a summer camp called Camp Redwood, and while there are plenty of real summer camps that share that name, it seems like the show's camp was invented and given its name for its bloody connotation. Trailers also mention a dangerous, escaped killer named Mr. Jingles, which is a reference to the undead mouse from Stephen King's novel The Green Mile.

Recently, Ryan Murphy released the new season's title sequence, which actually does include some real people. Jane Fonda's iconic aerobics workout flashes on the screen a few times, as well as a quick shot of Ronald Reagan — two people definitive of the '80s.

Although Jane Fonda herself has not been announced to be in the series, it does seem like her exercise influence will play a major role in AHS: 1984. Cody Fern's character is introduced as an aerobics instructor very much in the vein of Fonda in the trailer, with Emma Roberts, Gus Kenworthy, Billie Lourd, and DeRon Horton all taking his class.

The trailer also seems to confirm this main cast is entirely comprised of invented characters who are not based on anyone in real life. This is business as usual for American Horror Story for the most part, although the series has included characterizations of actual historical figures in past seasons, including: the Black Dahlia, Delphine LaLaurie, Marie Laveau, the Axeman of New Orleans, John Wayne Gacy, Aileen Wuornos, Jeffrey Dahmer, Andy Warhol, Valerie Solanas, Marshall Applewhite, David Koresh, Jim Jones, Charles Manson, and Sharon Tate, among others.

So, although AHS does predominantly create its own characters and stories each season, the show has been known to incorporate some true events into its twisted tales. Fans will have to wait to see whether AHS: 1984 brings in any real-life '80s horror or the show just sticks to fiction for its inspiration.

American Horror Story: 1984 will premiere on FX on Wednesday, Sept. 18.

More like this
Here's How To Vote For The Next 'American Horror Story' Theme Among 6 Options
By Cianna Garrison
'All-American' Star Samantha Logan Is Putting Herself First
By Rachel Varina
The 'This Is Us' Season 5, Episode 14 Promo Teases Another Beth Story
By Ani Bundel
Stay up to date