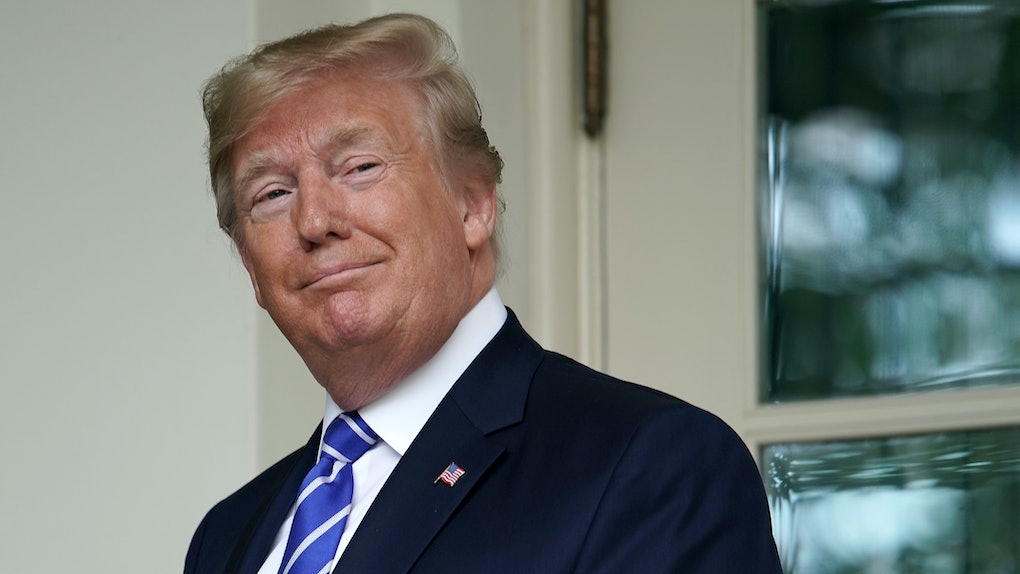 Is A Recession Coming In 2019? Donald Trump Apparently Isn't Worried

Over the past few months, there have been rumors flying that the United States could be seeing another recession. Just 10 years after the end of the Great Recession, another economic decline could be a serious problem for Americans, but there's been no confirmation as of yet. However, as rumors increase, one has to wonder: Is a recession coming in 2019? One thing is for sure, the president isn't worried.

In recent weeks and months, there have been a few indicators that might suggest the United States could face another recession in 2019. One of the biggest indicators is Trump's rocky relationship with China, and increased tariffs that have impacted U.S. importers and raised the prices of goods. In addition, stocks have taken a hit over the past few days, with the Dow dropping over 800 points on Wednesday, Aug. 14. Even though there's been talk of a recession, President Donald Trump and his administration have pushed back against the idea. On Monday, Aug. 19, Trump took to Twitter and claimed in a series of tweets that the economy is "very strong" and proceeded to claim Democrats are "willing" it to be bad ahead of the 2020 presidential election. He wrote,

Our Economy is very strong, despite the horrendous lack of vision by Jay Powell and the Fed, but the Democrats are trying to “will” the Economy to be bad for purposes of the 2020 Election. Very Selfish! Our dollar is so strong that it is sadly hurting other parts of the world...

... The Fed Rate, over a fairly short period of time, should be reduced by at least 100 basis points, with perhaps some quantitative easing as well. If that happened, our Economy would be even better, and the World Economy would be greatly and quickly enhanced-good for everyone!

Mark Mazur, economist and director of the Urban-Brookings Tax Policy Center, notes that factors such as unemployment, manufacturing, and stock market fluctuations indicate a possible recession. However, the problem is that there's no way to know for sure if a recession is on the horizon until it's too late.

"One of the problems is that [recessions] always come with a lag, and so you never know you've entered a recession until way after it has occurred," Mazur tells Elite Daily in an interview. "That's why you see a lot of speculation about what might happen. Even when we had the Great Recession in 2007 to 2009, it probably was half a year or so after it started that people realized they were in the throes of a recession. It's a science after the fact. Going in, it's hard to predict."

What are things to watch out for? "Unemployment typically goes up [in a recession], so fewer people have jobs, so that's one way it affects people," Mazur tells Elite Daily. "Usually stock market goes down, so people have less wealth, but it's a lot broader than that." He also notes signs seen in previous recessions, like lay-offs in automobile manufacturing or other manufacturing industries, not to mention a general lack of business profits.

Besides the president, other top Trump staffers have also discussed the rumors. Director of the National Economic Council Larry Kudlow stated on Sunday, Aug. 18, that the United States' low unemployment rate indicates that the economy was still in fine condition. However, CNBC reported on Monday, Aug. 1 that manufacturing in the United States is the lowest it's been since 2009, which could be a problem seeing as manufactured goods make up half of U.S. exports. According to an Aug. 21 report from the Bureau of Labor Statistics (BLS), the country has an unemployment rate of 3.7%, dropping from 4% at the beginning of the year.

"If you're Larry Kudlow and you're in the White House then [you] say 'look, unemployment is low,' which it is," Mazur says. "You're saying consumer spending is up, which it is, so you're saying all is right with the world."

While things such as manufacturing rates and stock market declines are indicators to a recession, according to Mazur, it's Trump's trade war with China that has companies worried. The two countries have been negotiating a trade deal over the past year and a half, and initially in May Trump proposed that the United States implement a 25% tariff on $200 billion worth of Chinese goods. Needless to say, that proposal didn't go over well with China. On Aug. 1, Trump dropped down tariffs to 10% of $300 billion imports coming from China, but Trump has stated they won't take effect until Dec. 15. Tariffs are fees paid by U.S. importers so that goods can enter the country, a fee which is then passed on to consumers — meaning goods being imported into the U.S. may come at a higher price tag, since it'll become more expensive for goods to enter the United States.

This trade drama may indicate warning signs, particularly in specific industries. "Soybean farmers are having more difficulty with their products because one of their biggest purchasers, China, is no longer purchasing them," Mazur says. "A number of companies that rely on components from China [are] dealing with higher prices for those products and try to figure out if they want to raise their prices or find a different supplier. You're in the early stages of people trying to find these things out."

But Mazur reiterates that actually predicting a possible recession is difficult. "This is a hard one, because you're trying to predict out into the future on how bad things could get," Mazur says.

Despite this back-and-forth with China, Director of Trade and Manufacturing Policy, Peter Navarro, told CBS on Sunday, Aug. 18, that these trade negations will not impact U.S. consumers. "If we have 10% tariffs on $300 billion worth of goods, that's $30 billion. ... One-fifth of 1% on the consumer price index. ... It's nothing," Navarro said.

In short? As the public continues to question whether a recession is making its way to the United States, the possibility is still very much in the air.

"That is a crystal ball question," Mazur says. "It's a hard one to get out and make a strong prediction on."

Clearly Trump and his team are doing their best to make sure U.S. citizens aren't worried about a possible recession. Keep your eye on the news, just in case.