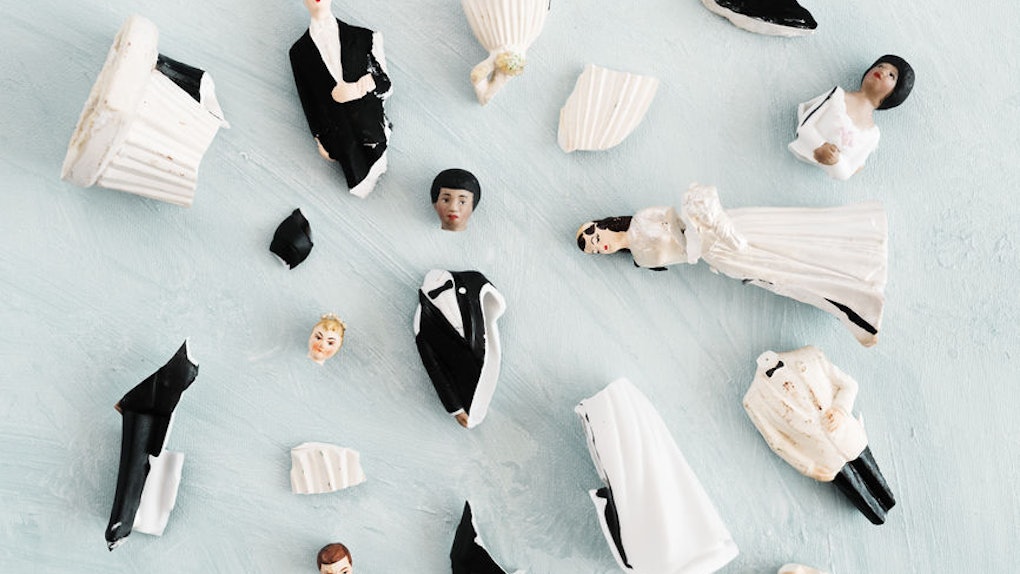 If You See These Red Flags Before Getting Married, Think Twice Before Tying The Knot

Getting married is pretty much the biggest commitment you can make to anyone throughout your entire life. Needless to say, a decision to do something like that probably shouldn't be taken lightly. But how are you supposed to know whether or not your relationship is marriage material?! Well, the best way is to seriously consider any reasons that lead you to believe it's not. Fine-tune your senses and use the advice of these people on AskReddit to help you steer clear of these red flags before you get married.

If they cheated on someone before, odds are they'll do it again.

During a discussion, she commented on how a couple years prior she slept with a guy that she really liked. The timing seemed wrong, since I knew she was dating another guy around that same time. When I asked if she had broken up with the one guy before she slept with the other, her response was "In my mind I had."

Sometimes being mean is just that.

She wasn't mean, she was "honest".

It's important to be compatible financially.

Insisting on a wedding dress more than i could afford. Refusing to understand it was too much for me

If you're not sure, it might not be right.

I married my first wife extremely quickly. She wanted to get married, I didn’t want to break up.

The day of my wedding, my friends asked me how I was feeling, and my response was “Well, I can always get divorced. “

Don’t settle. Marry someone you really, truly love and can see spending your life wife. That you’ll still want to hang out with when you’re both old, and fat, and infirm.

If your partner pulls a Tristan Thompson, watch out.

I was on bed-rest while pregnant with our son, due to preterm labor (5 months). I was told no sex as that could start the labor again. Even though we were living together and engaged, and the child was his, he decided that since I was not putting out, under doctor orders, that it was not considered cheating to go have sex with a 19 year old. We were married 15 years and he never would agree that he cheated. It was my fault for withholding.

You should be absolutely positive about this decision when you walk down the aisle.

My gut feeling that I was marrying the wrong person, as I was walking down the aisle.

You should be excited to spend time with your significant other.

I enjoyed my time away from him more than time with him. I would get super depressed when i knew he was going to be home from work soon. I brushed it off as being "antisocial" or "independent".

But now I'm with someone who I'm still excited to see every single day after 7 years and I'm still antisocial and independent.

The apple usually doesn't fall far from the three.

Her family. I thought a rose had grown from sh*t. I was wrong. It was a sh*t garden that grew nothing else.

If his own mom doesn't have faith in him, neither should you.

Before we got married, his mom said "If you ever get divorced, we will know it was because of him and not you." Huge red flag, and all I thought was "Wow, what a mean thing to say about your own son!"

You should probably know your bae's middle name before tying the knot.

When we were filling out the marriage certificate in the courthouse I remember thinking, “huh, so that’s your middle name.”

Trust your friends if they tell you this person isn't a good choice.

A few friends who knew her told me “Don’t do it. She’s a liar”. In hindsight they were totally right.

I found out after my divorce all my friends (and family) thought it was a mistake. I wish they’d told me beforehand, but I guess I ignored lots of other red flags...

Your partner should never scare you.

Once, about a month after we moved in together, he got angry and he got REALLY dark and even somewhat scary. I dismissed it as an aberration, a one-time thing that didn’t reflect how he “really” was. Big, big mistake.

My gut told me he was a good guy, but apparently my gut was broken.

Lies about small seemingly insignificant things, but often. If they can lie about something small, but often, they definitely can lie when it’s something big. Small example; meet my ex-wife’s friend and she introduced her as her sister. No problem with this, except when her “sister” needs to barrow money and what not. Didn’t even find out she wasn’t her sister until years into the marriage.

If your mom sees your union as the "biggest mistake of your life," it's probably not the best sign.

Standing around five minutes before the wedding starts my mother says “if we get in the car and leave now I will never say another word, you are making the biggest mistake of your life”

The best advice I can give? Go with your gut. If you have a feeling something's off, odds are you're right.