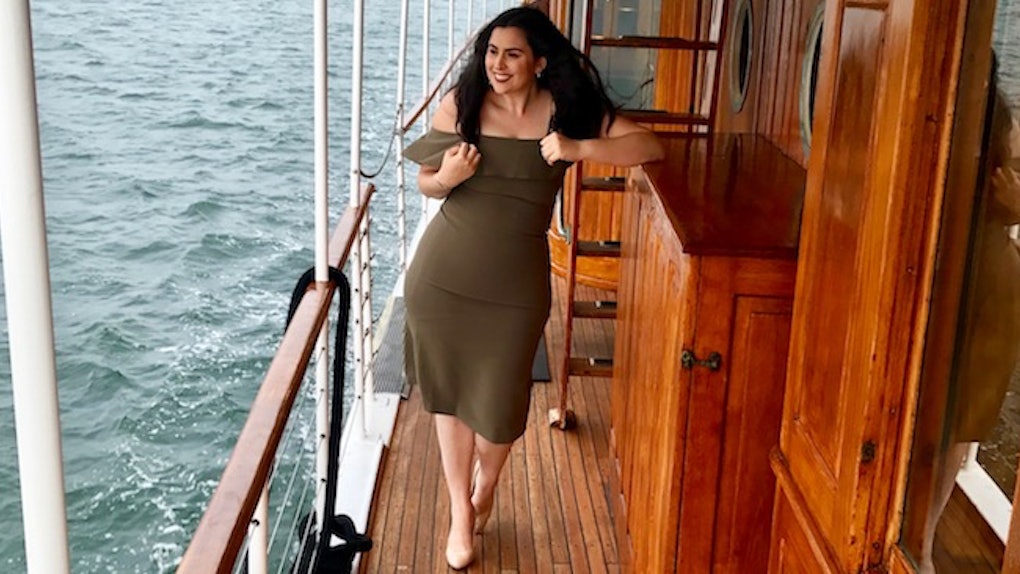 I Weighed More Than My Boyfriend & It Bothered Me, But I Needed To Get Over It

On my first day of college, I met a boy. He went to high school with my roommate, and I met him in my dorm lobby on move-in day. Let's call him "Mike." I've struggled with my weight and body image my entire life, and when I met him, I was probably the heaviest I've ever been. Although we didn't always have an official relationship, we spent almost every day of the next four years together. During that time, I was mostly larger than he was — my weight, like our relationship status, fluctuated. Weighing more than a boyfriend (or now, a potential girlfriend/partner, since I realized I'm pansexual a few years ago) was an insecurity of mine. I was told by media and by people in my life that bigger girls just didn't deserve romantic love. The differences in our sizes gnawed at my brain, making my insecurities and jealousies run wild, especially when Mike had attractive female friends who were conventionally thin.

A day or two after meeting Mike, I told a friend I had known for years that I liked him. She told me he wouldn't ever like me because I "wasn't thin enough." (This is harsh and awful, obviously, and our friendship suffered as a result. But she has since apologized and recognizes this was really bad.) This — coming from someone who was one of my closest friends at the time — really messed with my head. Even though Mike and I would have platonic sleepovers, and we spent every day together, I really thought he would never be with me because of what my friend had said. This insecurity came out especially when he'd make jokes about the two of us dating; as a defense mechanism, I acted totally grossed out by the idea.

Though I can't speak for her or make excuses, maybe part of the reason my friend made that comment was because — then and now – there are very few relationships on TV and in movies in which a traditionally female-identifying girlfriend or partner is larger than the boyfriend or male partner. When women are physically heavier, it's either noted in the past tense (think Monica Geller on Friends) or worse, as part as the "before" half of a makeover (think Mama June: From Not to Hot). All I'm saying is that if the casting department for The Bachelor is looking for a queer, curvy, Jewish lady for next season, HMU. We deserve love, too.

Anyway, even though Mike and I spent practically all our free time together, I was convinced he would never really want me because of my body. This may have just been me internalizing what people had said to me in the past, and what I had seen (or not seen) in the media, because he never alluded to this kind of thinking at all. He was lanky, small-boned, and able to run four miles without a care, with a history of being with stereotypically small, Christian, Southern girls. Knowing this made me extremely insecure. I was Jewish and big — in my curls, hips, butt, and chest. Of course, it didn't help that a boy I liked when I was 14 told me I had a body "no guy would ever like." I was used to this thought process.

Me, now, loving art/being art and not GAF.

But after a nice dinner at an Indian restaurant we liked, and after watching a few episodes of Friends in my dorm bed, he told me he wanted to be with me. And when our relationship turned physical, my list of insecurities and worries increased. What if I crushed him during sex? Why did my thighs have to jut out when I hugged him — as if his body could fit within mine? These worries didn't change when my weight did. I lost 50 pounds after a back surgery that left me bedridden for several weeks (I wanted to be as active as possible after it) but the anxious questions, concerns, and toxic thoughts didn't leave with it.

The thing about losing weight for any kind of reason is that your mind stays the same. When I weighed physically less than Mike, according to the numbers on the scale, I still felt the same way about my body — being jealous of thinner girls and worrying every time I sat on his lap — even if I looked different. I felt like the dynamic of the relationship didn't change at all.

But guess what? Mike told me he wasn't with me because of a number on a scale or because of the space I took up in this world; he was with me because he found me attractive. Because I cared about people. Because of my obnoxious, dorky laugh. Because I helped him on an art history presentation late into the night (and made it better, thank you very much). And sure, he thought I was pretty, but my concerns about weighing more than him were never even a factor in his mind at all. The thing I didn't understand then was that people are going to be attracted to you whether you're big or small; and someone will think you're the hottest sh*t around, no matter your size.

One of the best things about my relationship with Mike was he made me feel wanted. In his eyes, I was always desired. Naturally, I had to learn when this relationship ended that finding my self-worth in another person isn't healthy long-term at all, but honestly, at the time of that relationship, it helped me a lot. When I told him the story about the friend who said I wouldn't be "thin enough" for him, he was angry. He told me he always thought I was gorgeous, from the first day he met me. And when he found out about the boy who said that despicable thing about my body? Mike said he'd punch him if he ever met him. (However, I don't condone violence, and anyway, Mike screams at the sight of cockroaches.)

Funnily enough, the next person I was with after Mike was physically bigger than me — and the weight I had once shed was coming back, bit by bit. I didn't feel that post-surgery energy anymore after five years had passed, and maybe I was less focused on proving I had to look a certain way for anyone. Also, I lost the weight in an unhealthy way, by restricting basically every food I loved: chocolate, pasta, bread. Naturally, it would come back. That next boy was muscular and taller than I was, and during our first kiss, I was actually kind of scared he would crush me. (These weird fears I have about people crushing people during intimacy can stop any time, thanks.)

I realized toward the end of that relationship with Mike that people are going to like me or they're not, but being who I am isn't a flaw at all. I embrace my larger physical attributes because taking up more space in the world isn't a bad thing. Previously wanting to make myself as small and delicate as possible was me allowing some insecurity to rule how I saw myself. I'm owning who I am — a person with a big laugh and a curvy body, who pretends to be a legit makeup guru on Instagram stories — because I'm actually f*cking great and I don't need to change anything about myself to attract someone to me at all.

Now, I'm focusing less on being "too big" for another person — girlfriend, boyfriend, whomever it may be — and more on just finding someone who makes me happy. While working on my insecurities is still a daily battle, I'm learning now that everyone is deserving of love, no matter their size.