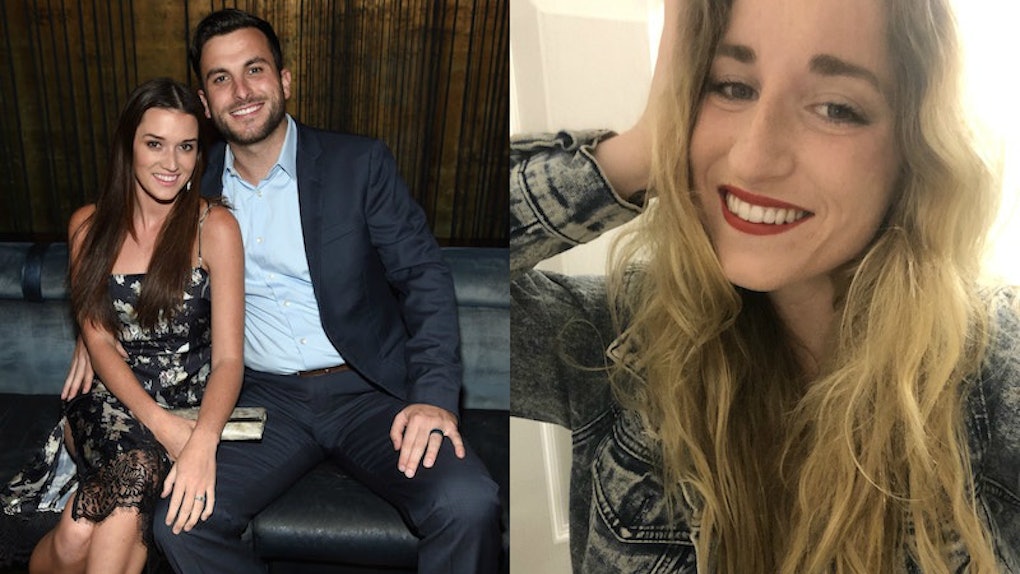 I Tried SmileDirectClub Like These 'Bachelor' Stars & Here's What Happened

When I was a kid, I never had to get braces. I was always happy about my smile, but that changed when my wisdom teeth started coming in. As soon as that happened, things got a bit crowded and my grin started to change. It wasn't drastic, but it was something that I noticed well into my 20s. After a while, I decided that it was time to straighten everything out — but I didn't get braces. I heard about another option from some of my favorite reality starts. Instead, I tried SmileDirectClub like these Bachelor Stars, which is a series of invisible aligners that were mailed to my house. And guess what? It worked.

If you follow former contestants of The Bachelor and The Bachelorette on social media, then SmileDirectClub might sound familiar to you. That's because stars like Jade Roper Tolbert and Tanner Tolbert (the winners of Season 2 of Bachelor in Paradise) have apparently used the invisible aligners. Based off one of Tanner's Instagram posts from June 2017, both he and his wife finished their treatments and were left with "straight pearly whites." Lauren Bushnell, a contestant on Season 20 of The Bachelor, has also teamed up with SmileDirectClub in the past — but there's no confirmation that she used the treatment.

Still, tons of celebs from the big screen and the radio have been affiliated with SmileDirectClub in the past, and they inspired me to give it a go. Of course, the straightening process wasn’t an overnight phenomenon like you’d see in Hollywood. It actually took over six months, and various steps needed to be taken in order to properly align my teeth.

If you’re hoping to give SmileDirectClub a try, the company will have to do a 3D scan of your mouth. That way, they’ll be able to create a unique aligner plan for your smile and have it approved by a “duly-licensed” orthodontist or dentist before sending it to you. Thankfully, there are two ways to get that done: You can order an Impression Kit online and send the company your imprints, or you can visit a SmileShop and have someone scan your mouth on the scene. FYI, I chose the latter.

After walking into a New York City-based SmileShop, I sat down with a “Smile Guide” (aka SmileDirectClub employee) and started the scan. During the process, the Smile Guide used a bulky scanner to light up my mouth and take photos of my teeth. As the scan was processing, a virtual photo of my pearly whites appeared on the screen next to me. That, of course, was the “before” scan, which is totally different that the “after scan” (which I’ll get to soon — I promise).

After the scan was complete, the Smile Guide gave me a complimentary "Bright On" Whitening Kit and answered any questions that I had about the treatment. My main concerns were related to drinking coffee and red wine with the aligners in, which are two things that I was advised not to do (sigh).

A few days after my 3-D scan, the folks at SmileDirectClub sent me an interactive virtual model of the transformation that my teeth would undergo throughout the process. The virtual model showed me the front, top, bottom, left, and right scans of my teeth, along with a virtual “Play” button that showed how they would move from start to finish. After seeing the results, I was even more excited to give the aligners a try.

For reference, here are quick "before" and "after" pictures of my scan:

Not before long, a big purple box of SmileDirectClub aligners came in the mail. The box itself held my entire treatment, which was created to last about 5 months. My specific plan included three aligners for each month (Week 1, Week 2, and Week ¾). In order to work properly, those aligners needed to be worn for 22 hours a day (aka any time I wasn’t eating or drinking anything other than water).

In addition to the aligners, the delivery also included an aligner case (which totally came in handy), extra tools for securing and removing the aligners, and more teeth whiteners.

TBH, receiving the entire package was like getting a mega-gift from the Tooth Fairy.

OK, now that you know what steps I needed to take before popping my aligners in, I’ll talk about how the entire process went. Since the treatment took over six months for me (which was longer than it should’ve taken), I'll try to summarize it the best I can, starting with the aligners themselves.

Every time I began a new aligner throughout the process, I felt a little bit of soreness (understandably). I usually swapped ‘em at night so I could let my teeth adjust while I slept, but the pain and pressure was always there at the beginning of each week. Of course, that discomfort only lasted a day or two and subdued when my teeth adjusted to their new places. According to SmileDirectClub, that soreness is to be expected, so I wasn’t worried. After a few days of wearing each aligner, I could barely feel ‘em.

As you could imagine, wearing the aligners for 22 hours a day was really freaking hard (especially for someone who loves eating as much as I do). But after a while, I got used to brushing my teeth after every meal and snack (because that’s the rule, y’all).

Still, I found myself slacking throughout the holiday season and leaving my aligners out a little bit longer than I should have (oops). Because of that, I tried making up for lost time by keeping them in for more days than usual, which prolonged my entire treatment. It worked for me, but that doesn't mean it'll work for you, too. (I’d reach out to SmileDirectClub if you find yourself on that boat.) Everyone’s treatments are different, and it’s probably best to talk to someone if you aren’t able to follow the curriculum to a T.

All soreness and snacking urges aside, the aligners worked (and I mean really worked). However, patience was key throughout the entire process. During the first few months, I didn’t notice a huge difference in my smile. However, toward the middle of the treatment, I started seeing major changes. For instance, my front tooth that was seemingly protruding was straightening out, and my bottom teeth were becoming less and less crowded.

In all honesty, I became more and more confident with my smile throughout the entire process — and once the treatment came to a close, it was time for the retainer.

Toward the end of my SmileDirectClub plan, the company sent me a retainer that would help my teeth stay in place after the aligners do their jobs. I was told to wear the retainer like an aligner for the first two weeks (for 22 hours each day) — and then, I could wear the retainer only at night time. If I don’t wear my retainer every night moving forward, my teeth could move back to where they were at the beginning of my treatment. According to SmileDirectClub, anyone who uses the plan should replace their retainer every six months.

Now that I’m done with my SmileDirectClub treatment, I understand why all of those celebs chose to use the clear aligners. As long as you use ‘em properly, they definitely work.

Dr. Jeffrey Sulitzer, DMD, the chief clinical officer of SmileDirectClub, provided Elite Daily with a statement on the aligners. He said, "SmileDirectClub’s clear aligners area safe, affordable, and convenient alternative to traditional braces for adults and teens who have mild to moderate crowding or spacing issues."

If you're experiencing spacing issues or crowding (like I was), you can try SmileDirectClub for $1,895. If you'd rather pay in segments, you can put $250 down and pay $85 per month, per SmileDirectClub. The same price goes for the company's new Nighttime Clear Aligners, which are only worn while you're sleeping. They're great options for anyone who can't wear aligners all day, every day — and if that's you, check 'em out.

More like this
I Tried Singing While Running Like Miley Cyrus & OMG, My Lungs
By Rachel Varina
Jackie Aina Is Cutting Ties With Morphe — Here's Why
By Margaret Blatz
Billy Eichner Joked Colton Underwood Was The "First Gay Bachelor" 2 Years Ago
By Corinne Sullivan
Stay up to date