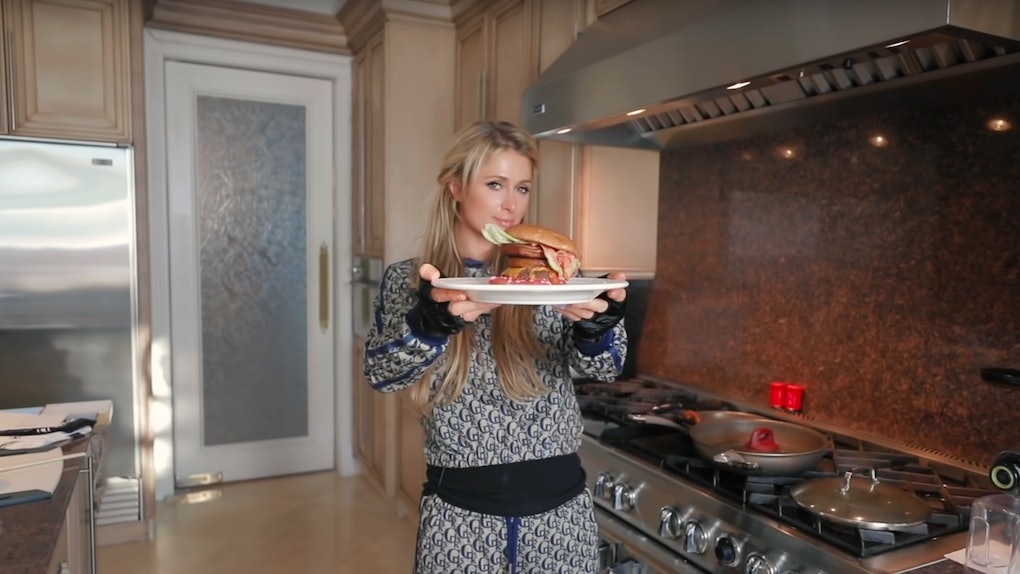 You've been there before: You're scrolling through your Instagram feed when you see your favorite celeb post about their favorite new product — a face serum, vitamins that will make your skin brighter, or a specialty food service. You can't help but want to be like the stars, but are the products worth it? In Elite Daily's series, I Tried, we put it all to the test. We're trying those products as well as celebrities' health and wellness tips, recipes, and life hacks. We'll do the leg work and tell you what living like your fave star is really like.

Move over "that's hot," because Paris Hilton has added a new catchphrase to her repertoire: "sliving." She coined the term in 2019 to describe what it means when you're "slaying" and "living" at the same damn time. Then, in May 2020, she introduced the world to the "Princess Paris Sliving Burger," so fans could live it up while chowing down. If anyone "slives" every day, it's Paris Hilton, so I tried her "Sliving Burger" recipe to be more like the iconic heiress.

In recent years, Hilton has moved away from her "party girl" image and is now focused on running her fragrance empire, performing as a DJ, and, in one of her most recent endeavors, helming a YouTube "cooking show." So far, she's only made a couple of videos featuring her culinary creations, and her Sliving Burger is definitely the most intriguing (if only because of its name).

In May, Hilton teamed up with Hunter Pritchett, the head chef at Atrium restaurant in Los Angeles, to create the "Princess Paris Sliving Burger" (which, hot tip, Angelenos can order from the restaurant via Uber Eats). For her cooking video, Hilton started off by talking with Pritchett about her thought process behind the recipe. "I want to make something that tastes good, that's fun, something that can make people smile," she said. With truffle oil, onion rings, and a pretty pink sauce, this recipe was begging for me to recreate it.

So, grab your bedazzled apron, put Hilton's latest jam on your speaker, and start cooking. Here's how it went for me:

It wasn't until I was picking up my ingredients that I realized my local grocery store didn't carry pickled mustard seeds, so I had to make these on my own. I used this homemade pickled mustard seeds recipe, which required white wine vinegar, sugar, water, salt, mustard seeds, and a shallot. I had to simmer the seeds — which were surprisingly expensive at $9 for a small, two-ounce container — in the sugar, vinegar, and water mixture, and the smell was strong. It didn't bother me too much, but if you have a sensitive nose, beware of this. I made these the night before and stuck them in the fridge so they were ready to use when it came time to make the burger.

This pink sauce is definitely one of the signature traits of this burger, so I didn't want to mess this one up. To make the sauce, I combined 1 cup of ketchup, 1 cup of mayo, 1/2 teaspoon minced garlic (the recipe called for granulated, but I had minced on hand), 1/4 cup of the pickled mustard seeds I made the night before, and 1/4 cup finely grated red beets (which I shredded with a cheese grater). I used about one beet total, so if you have a food processor, it might be easier to simply throw one beet and the rest of the ingredients into that and get them all grated and mixed up together.

But alas, I do not own a food processor, so after hand-grating the beets, I mixed the ingredients in a bowl, resulting in a gorgeous pink color.

4. Put Onion Rings In The Oven

I love onion rings, so I was really pumped that Hilton chose to put these on her Sliving Burger. The packaging my frozen onion rings came in instructed me to put them in the oven at 350°F for 30 minutes, so I tossed them on a baking sheet, popped it into the oven, and set a timer accordingly.

This was fairly easy, but because I'm not a robot, chopping onions always makes me tear up big time, so I wasn't the biggest fan of this step. Powering through the pain, I chopped the mushrooms and about half of a yellow onion, which gave me 1/4 cup of each ingredient.

To complete this step, I put 1/4 stick of butter into a pan and turned the heat on low so it would melt. Then, I added the chopped onions and mushrooms and sautéed them until they were browned.

To make the hamburger, I combined one pound of meat, the cooked onion and mushroom mixture, and 1/2 teaspoon of truffle oil — which I luckily had on hand because it came with a recent avocado toast order — in a mixing bowl. The recipe said I could go for either Waygu beef or 85% lean ground beef, and since I'm a woman on a budget far more modest than Hilton's, I opted for the latter option.

When the ingredients were combined, I formed the mixture into patties. Word to the wise: Make the patties about the same size as your bun. My patty was too narrow and tall for my bun, which made adding the toppings a challenge later on.

8. Add Cheese To The Patty

Once the burger was browned on both sides and cooked thoroughly (if you're unsure, use a meat thermometer to ensure the center of the patty is at least 160°F, ), I added half a slice of cheddar cheese to the top. When Hilton made this recipe in her YouTube video, she said she didn't want any of the cheese to touch the pan and get burnt, so I made sure to do the same when I made mine. Once the cheese was melted, I removed the patty from the pan and turned the stove off.

This was also when the oven timer dinged, so I pulled the onion rings out and set them aside.

Once my cheese was nearly melted, I spread a tablespoon of butter on my Hawaiian bun and put it in the oven for 5 minutes at 350°F to make the bread warm and toasty. TBH, I probably could have left it in there a few minutes longer to make it a bit more toasted, but I was excited and didn't want to wait any longer.

Yes, the recipe specifically calls for the star-shaped pickles. I cut these by hand myself, so if anyone has ever questioned my dedication to my cooking craft, there's no reason to anymore.

Finally, it was time to assemble my creation. First, I put down the toasted bun, added a layer of the beautiful pink Sliving sauce, drizzled on one tablespoon of honey, added lettuce, then placed the cheesy patty on top. Next, I added star-shaped pickles, three onion rings, a bit more Sliving sauce, and put the final bun on top.

12. Eat The Burger & Know You're Sliving

The final product looked beautiful... and tall. I had to smush the burger a bit to eat it all the stacked ingredients in one bite. Still, I was impressed with what I made. The first bite oozed with Sliving sauce, which I loved, despite the fact I normally hate all things mayo-based. The onion rings added a perfect crunch, and I could taste the truffle flavor from the patty coming through it all. The Hawaiian bun and honey added a subtle sweetness, which balanced out all savoriness of the patty, cheese, and sauce.

I gotta say, this is by far the best thing I've made for Elite Daily's I Tried series (and I've cooked a lot of recipes), so I give major kudos to Hilton for making this. She definitely knows what she's doing in the kitchen — or at least knows who to ask when she needs help sliving her best life.

More like this
I Tried Singing While Running Like Miley Cyrus & OMG, My Lungs
By Rachel Varina
TikTok's "Nature's Cereal" Ice Cream Is A Bussin' Dessert Version Of The Viral Trend
By Rachel Chapman
Demi Lovato Called Out A Froyo Shop For Promoting Dieting Culture, & It's Getting Mixed Reactions
By Brandy Robidoux
Stay up to date