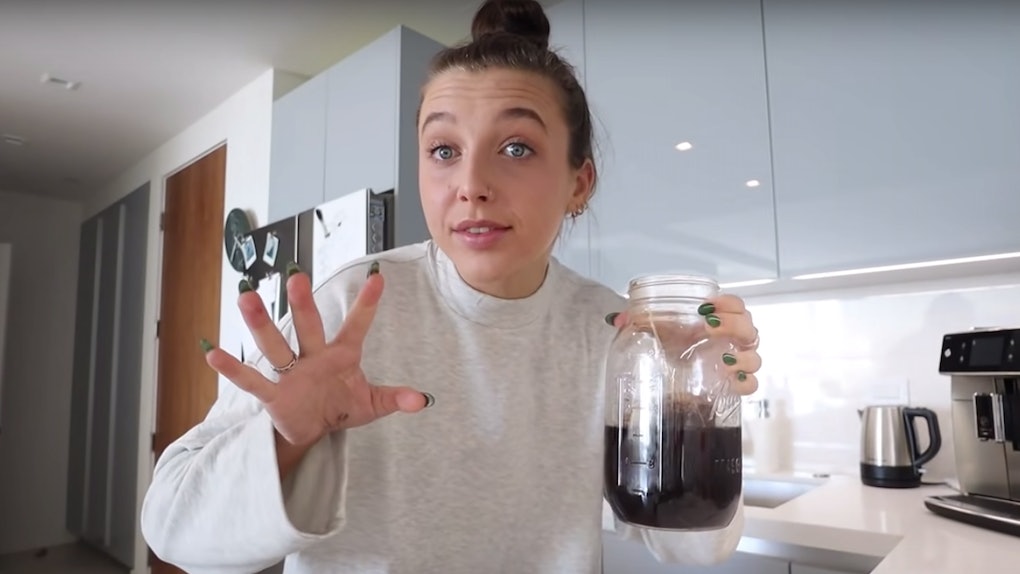 You definitely know Emma Chamberlain from her hilarious YouTube videos, but there's a lot more to her than silly dances and out-there challenges. Real fans know she's also a coffee connoisseur, which is evidenced by the many videos she has posted either making, drinking, or searching for coffee. Because the social media star is on-point in pretty much everything she does, I tried Emma Chamberlain's iced coffee recipe in hopes of channeling her energy.

If there's one thing Chamberlain knows, it's good beans — so much so, in fact, she started her own coffee company in December 2019 called Chamberlain Coffee. She now sells branded, single-use steeped coffee bags (something I had never heard of before, TBH), which have become an essential part of her own caffeine routine.

In a video about her coffee recipe, Chamberlain says the new steeping bags helped her coffee-making procedures become more simple and time-effective.

Here's what it looked like when I attempted to recreate Chamberlain's ritual:

As mentioned above, Chamberlain uses some pretty specific items to create her signature coffee recipe. To ensure I got the same result as her, I made sure to buy the exact items she uses. It wasn't an easy feat — there was only one grocery store within 10 miles that carried the creamer she uses. The Chamberlain Coffee bags were easy enough to purchase online, though, and they arrived about six days after I placed the order.

I was surprised to see Chamberlain uses three bags to make one serving, but then I realized her recipe actually makes about 3 cups (once creamer and milk are added). Since Chamberlain infamously drinks a ton of coffee, it makes sense she'd want to make a lot of it at once.

Chamberlain makes her coffee in Mason jars, and luckily I still have a couple left over from my Pinterest crafting phase. I dug one out from the top shelf in my kitchen and placed the three bags of coffee into the jar, with the tea-like tags hanging out the top.

In her video, Chamberlain was iffy about how much water she puts in her coffee, but she estimated it to be around 600mL, or two-and-a-half cups. Luckily, my Mason jar has handy measuring lines on the side, so I filled it up to a little over two cups and figured that'd be good enough.

If you're doing this yourself, make sure you hold onto the strings of the coffee bags. I didn't, and they subsequently fell into the jar as I was pouring in the water, and I had to fetch them out.

I sealed up my new creation nice and tight with tin foil, since, like Chamberlain, I also lost the lids to my Mason jars some time ago.

4. Leave Jar In The Refrigerator Overnight

Then it was time to let it steep overnight. I typically make my coffee in the morning, so it was nice to feel like I was getting a head start on the day ahead of me.

Chamberlain's love of Mason jars really came across in this video, as she not only steeps her coffee in them, but also likes to drink from them.

In the morning, Chamberlain fills a new Mason jar up with ice and pours the now-flavorful coffee into it. So, back to the cabinet I went, grabbing another jar and filling it with the steeped coffee, leaving a bit of room for the rest of the ingredients.

Although the recipe wasn't complete, I wanted to try the coffee to see how it tasted on its own. I was impressed by the nutty flavor. Honestly, it tasted like some of the coffees I'm willing to pay $7 for when I'm out and about in Los Angeles.

I then opened up my new Califa Farms vanilla almond milk and poured about a quarter cup into the glass. Since she didn't specify how much milk she uses, I just tried to match the color of Chamberlain's typical coffee from her videos.

I tested a sip with just coffee and almond milk, and in my non-professional opinion, I think the vanilla in the milk brought out more of the coffee's chocolate hints. It was creamier, too.

This creamer was a pesky one to track down, so I was eager to see if it was worth all the effort to find it. I typically don't use creamer — because I'm dairy-free like Chamberlain — so I was also pumped to learn this one was made from nuts instead. I poured about 3 tablespoons of it into my jar, again just estimating the amount based on what her coffee looked like in her video.

I did not plan this well. At this point, my jar was overflowing and coffee spilled all over my counter. Honestly, it felt like something that would happen to Chamberlain anyway, so I did't let it bother me too much.

Chamberlain has an eco-friendly metal straw she uses to mix and drink her coffee. I used a spoon to stir, because I'm not quite as fancy as she is, and just sipped it from the jar.

Finally, it was time to test out the finished product. I had tasted sips along the way, but I was beyond ready to experience the full Chamberlain effect.

With the steeped coffee, almond milk, and creamer together, the coffee tasted absolutely delicious. It was rich, but not overpowering or too strong. There were hints of cherry, too, but I thought that flavor was more evident before adding milk. However, I enjoyed the creaminess when everything was combined.

Overall, Chamberlain's coffee recipe was pretty easy, and quick to recreate, taking only about 5 minutes after it steeped overnight. Since there are really only three components to the recipe, I think the final product really depends on the quality of each ingredient, so spending a bit more on the dairy-free creamer and specific almond milk seemed worth it, to me.

I'll definitely use this recipe again, although it might be more of a special treat, rather than my daily dose of caffeine. (I'll rely on my more cost-efficient coffee pot for that.) However, if you're looking for an at-home option that's comparable to an upscale café, or you just want to pretend to be your favorite YouTuber for the day, this recipe could be exactly what you're looking for.

More like this
I Tried Working Out With A Kardashian Trainer & Now I Never Want To Be Famous
By Rachel Varina
TikTok's Viral Ranch Pickles Recipe Is A Big Dill, & So Are These Other Pickle Recipes
By Marisa Casciano
TikTok's Spicy Pickled Garlic Recipe Only Has 4 Ingredients, So You'll Be Done In No Thyme
By Rachel Chapman
Stay up to date