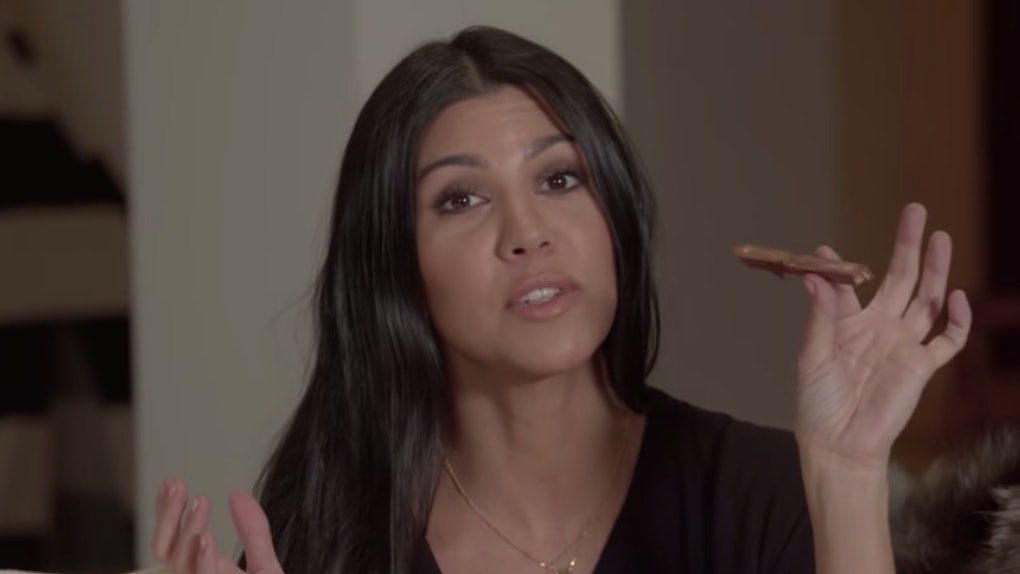 Back in 2016, Kourtney Kardashian revolutionized candy-eating for people everywhere. She posted a video on YouTube that showcased her method of eating a Kit Kat bar, which she admitted her sister Kim actually taught her when they were children. Truly, it was a groundbreaking moment, and it went viral at the time because no one had seen people nom on candy bars quite like the Kardashians do. So, after years of replaying the iconic YouTube video, I tried eating candy like Kourtney Kardashian, and it was an enlightening experience.

Usually when people eat candy, they gobble it down in a couple of bites. But Kourtney's method is comprised of six meticulous steps, which means her candy-eating process takes a whole lot longer. Basically, the method entails breaking a Kit Kat apart into as many pieces as possible and eating each of those pieces one by one. You can check out her original video below.

I've always been intrigued by this inventive technique. So, some three years after Kourt shared her methods with the world, I grabbed a fun-size Kit Kat and finally began my own throwback candy experiment.

This step was easy enough. It's also pretty standard in most methods of Kit Kat eating — unless, of course, you're the type of person who goes rogue and bites directly into the entire thing. I am no such monster, so I was used to breaking off a piece of that Kit Kat bar.

Step 2: Eat The Chocolate Off Each Short End

This was another step that was easy enough to do, although I was already getting a little impatient and wishing I could just dig into the whole piece of candy already.

Step 3: Eat Chocolate On Each Long Side

My little mess-up meant that I had to start over with a fresh Kit Kat in order to get the full Kourtney candy-eating experience. But hey, I wasn't going to complain about getting to nosh on even more chocolate.

I repeated Step 1 and Step 2 and got ready to complete Step 3.

Once I got back on track, I was able to easily nibble my way around the side of the Kit Kat. This step involved the most chocolate-eating, so it was pretty fun.

It may be a hot take, but to me, the wafer is arguably the best part of eating a Kit Kat. I'll admit I missed the crunch of biting into all three layers of wafer all at once, but I still thoroughly enjoyed eating that first wafer layer.

Step 5 is pretty similar to Step 4, and it was just as tasty.

I think the middle wafer was the tastiest of all, probably because of all the hard work that went into getting to it.

I'll be real, for years I thought the way Kourtney eats candy was ridiculous, but now that I've tried it out, I can totally see the merits in it. It took me about four minutes to eat an entire Kit Kat, which is way longer than it's ever taken me to eat a fun-size treat before. But since I enjoy eating candy so much, why wouldn't I want to enjoy it for longer?

In her video, Kourtney says, "This tastes so much better. I would never even dream to eat a Kit Kat and just, like, bite into it." And honestly, I think I agree. My Halloweens and other candy-filled holidays will never be the same again.

More like this
I Tried Working Out With A Kardashian Trainer & Now I Never Want To Be Famous
By Rachel Varina
Kaitlyn Bristowe & Jason Tartick Are Engaged & Their Proposal Story Is Cute AF
By Rachel Varina
'Unidentified With Demi Lovato': Peacock Release Date, Cast, Trailer, & More
By Ani Bundel
Stay up to date