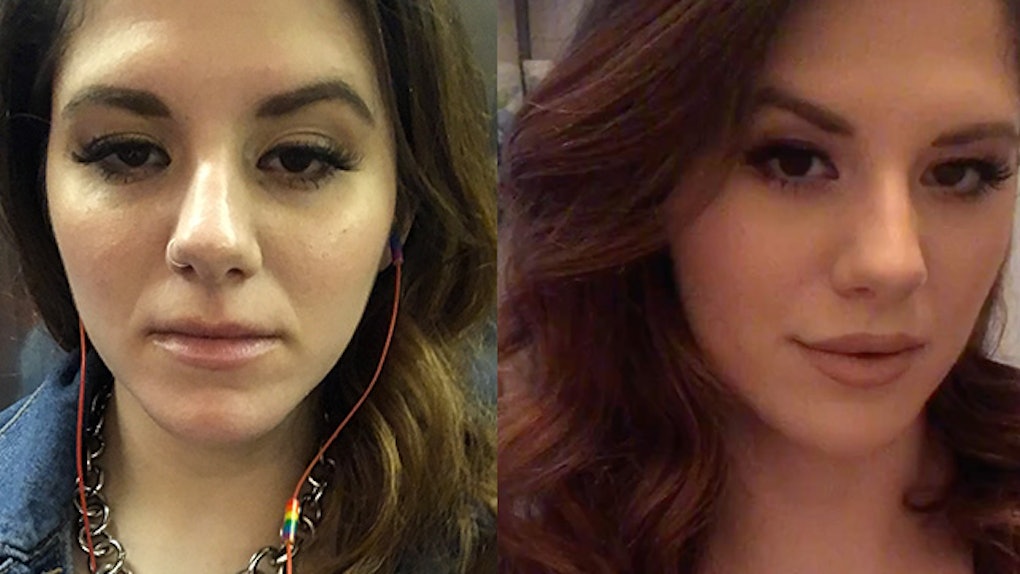 I have the kind of face that's naturally intense as hell in its resting state. Though I'm sweet as apple pie on the inside, my outsides are more steel nails and razor blades. So I got fillers to "cure" resting b*tch face, and my frown was quite literally turned upside down.

I have a complex relationship with my resting b*tch face (as we all do with things that involve self-image). For years, I've had an "eff off" attitude about it, never really caring what strangers thought. Less then a year ago, I even wrote a tutorial on how to use makeup to enhance your resting bitch face. With the help of makeup and hair dye, I leaned into my intimidating and semi-angry looking vibe, you know, if that's what people thought I looked like when they made eye contact with me. TBH, retrospectively, I think I made myself look as intense as possible so I could keep everyone at arm's length. It's hard for me to open up 90 percent of the time, so a bitchy look was the best way to ensure I'd never even be challenged to.

Though I people think I can look like a big b*tch (and there's nothing wrong with it), I'm proud to say I'm not one. (And, TBH, what's wrong with being one? Nothing.) As a professional makeup artist, I've dedicated my life to making others feel and look their most beautiful. So, after a while, having acquaintances, coworkers, and friends tell me they thought I'd be the meanest person alive when they first met me started to take a toll on my soul. I'm tired of the stereotype facing women that if you look like you're angry, then you probably are, and that this somehow makes you unapproachable. Men don't face that same scrutiny.

These observations were always followed up with a comment about how "nice" I actually am (as if this should be a woman's only goal) and how surprising it was for them to learn that. When I pressed for reasons why, they'd always site the physical attributes that intimidated the hell out of them — my face being the primary source. I have dark, angular features by nature that I enhanced with contour, smokey eyes, and lip liner, so the comments never shocked me (though they did sting a bit). All in all, I liked how I looked. A lot.

When I'm conscious of how I look, it's easy for me to outwardly convey my innermost sparkly unicorn self.

However, when I'm at rest, I look admittedly pissed. Even without the darker hair and intense makeup, I still look like a big ole beyotch.

I began to wonder how many opportunities I had missed out on thanks to my RBF. How many work colleagues feared asking me for help because they thought I would judge them? The more I thought about it, the more I was inspired to take action to change it. And I'll be honest: My reason for doing so was twofold: for me, and for other people. I didn't want to be seen as someone who was unapproachable for whatever reason, but I also actually want to feel like I look.

So, I decided to get fillers to "fix" my RBF. It's important to point out here that I don't think that women, or anyone, should feel pressured to change their face to fit the needs of others (or to adjust to society's stereotyped and outdated view of what a woman should be and how we should look). But I was interested in trying the fillers (which are temporary) to see how they made me feel. Though I nearly canceled my appointment several times (mostly due to my paralyzing fear of needles and change), I was comforted by the fact that injectable fillers are temporary. Just like makeup or a hair dye, they would fade away eventually.

I sweated bullets the whole subway ride to the doctor's office, but I was immediately comforted when I met the doctor himself. Dr. David Shafer, MD, FACS. The second Dr. Shafer shook my hand, all my worries melted away. He treated me with such genuine warmth and kindness, I intuitively knew he'd take care of me.

Dr. Shafer started the consultation by asking me to explain what I had come in for and, quite frankly, what bothers me when I look in the mirror. I noted the indicators of my resting bitch face — the furrowed brow, steely stare, and, most importantly, the scary scowl. He came up with a plan of action. First, Dr. Shafer suggested we do a little lip filler, which would plump up my lips, leaving them more hydrated, full, and much less scowl-y. Then, he suggested we inject a little Botox into a few key places.

By placing "a drop" Botox under the outer corners of my mouth where the muscles pull the mouth downward into a frown, the opposite effect would occur — the outer corners of my mouth would naturally upturn into a slight smile. "It basically turns the frown upside down," said Dr. Shafer. "It works on most people... It's only a couple units, so the cost is minimal [about $60], but the effect can be very dramatic." By temporarily reducing the muscle activity, Botox would help to virtually erase the signs and lines of frowning from my face.

"When you look at expression," Dr Shafer went on to explain, "you may focus on the mouth, but you have to look at the face as a whole." He guided me through a couple facial expressions as I stared at my reflexion in the mirror. He noted that the forehead, the area between the brows, and area right around the outer corners of the eyes are also big indicators of angry or sorrowful expressions. "The goal is to put enough Botox to soften up that frowning and the wrinkling," he said, "but not so much that it's preventing the animation... My philosophy is always start out slowly — you can always put more in." TBH, I couldn't agree more.

As we continue talking, Dr. Shafer explained that in addition to listening to my concerns, he's also watching my face to see how I animate. He does this with all his patients so he can decide exactly where to put the Botox and filler later on. I felt so at ease knowing that Dr. Shafer was personalizing my treatment to my own face, customizing my filler plan and placement to treat my particular concerns.

After we chatted for 15 minutes, it was time for the injections to begin. I had mentioned my fear of needles to Dr. Shafer, so he put some numbing cream on my lips to help put me at ease. Most people don't even need the cream, however, he mentioned that it sometimes does benefit nervous first timers like myself.

As the cream sat on my lips, Dr. Shafer began by injecting the Botox around my orbital bone area followed by the area between my brows, my forehead, and the area below the outer corners of my mouth. I'm generally a baby, but I could barely feel the Botox as it went in. If anything, I felt a slight warm sensation right as the needle made contact, but that was pretty much it.

The fillers took a bit more time and TLC, but again, the pain was so minimal. It was more just a minor discomfort. However, I did meditate to the happy place in my brain to distract myself from the fact that a needle was literally puncturing my face.

During the consultation, Dr. Shafer had explained to me that the fillers are made of hylauronic acid. If this phrase has a familiar ring to it, it's probably because hylauronic acid is found in the majority of skincare and complexion products these days. Hylauronic acid is a molecule that holds up to 1,000 times its weight in water, leaving skin plump and moisturized. In your moisturizer, these molecules are free floating. According to Dr. Shafer, in the filler, there are bonds between the molecules that create a chain-like structure, resulting in the filler's gel-like consistency. "With hylauronic acid," Dr. Shafer explained, "it's a natural molecule that's normally in the skin, so there's no chance of an allergic reaction."

The most common fillers for the lips are Juvederm Ultra and Volbella. The former is made for plumping up the lip (à la Kylie Jenner), but the latter, with its thin consistency, is ideal for subtle enhancements, like diminishing smoker lines along the lip or adding a little definition. Basically, depending on your concern, you can customize your filler to your liking.

All in, my Botox and filler would total about $2,000, which is definitely a significant cost. However, if you have concerns you wish to treat, but the total cost seems overwhelming, finding a board-certified doctor can help you prioritize. "Botox is $20 per unit, normally," Dr. Shafer said, "Filler $1,000 a syringe. We work with people to see what bothers them, and then prioritize things. So if someone's budget is only $700, then let's just try one area or two areas of Botox first and see how that works. It's just finding what's best for the patient." Also, FYI, Botox takes three to five months to break down. Filler lasts eight months to a year. So though filler might come at a high cost, it does have a longer lifespan.

After my injections were done, Dr. Shafer gave me an ice pack to hold against my lips for a few minutes and then bid me farewell. Though my face was a little swollen and I was definitely still numb, I headed out on the subway home.

For the first few days, I experienced pretty minimal bruising and swelling. The right side of my upper lip was significantly more sensitive and was the only part that bruised, and even that went away after a few days.

Now I've healed for nearly a week and I couldn't be (or look) happier. Only a few friends and colleagues noticed a difference in my face immediately (I think the fact that I've overdrawn my lips for years makes it more inconspicuous).

Even the guy I've been seeing who (somewhat unfortunately) notices every little adjustment I make to my appearance had no idea!

I definitely notice the slight upturn to the outer corners of my mouth. I can see how, even when I make the most angry of expressions, my face is softer and significantly less b*tchy looking.

The change is subtle enough that I can still emote, but major enough that it quite literally did turn my frown upside down.

So, see ya resting bitch face. I might want you back some day, but for now, I'm quite enjoying living without you.

More like this
Is Sephora Closed Due To Coronavirus? Here's How The Brand Is Responding To The Pandemic
By Theresa Massony
Where To Get Farmacy's Sweet Apple Clean Makeup Meltaway Cleansing Balm, A New Take On The Classic
By Margaret Blatz and Theresa Massony
These Asian-Owned Beauty Brands Are Creating The Products You'll Use Forever
By Margaret Blatz
Stay up to date